Gordon Parks Jr.’s blaxploitation classic “Super Fly” is often considered the “Citizen Kane” of its genre. Philip Fenty‘s verbally sharp crime story script was ably performed by character actors like Carl Lee, Julius Harris and the film’s uber-conked leading man, Ron O’Neal. O’Neal played Youngblood Priest, a suave, larger than life cocaine dealer who’s doing quite well financially yet has become disillusioned with the lifestyle. He wants to make one final score so that he can exit the game with no worries. If he can sell a million bucks worth of coke and keep the corrupt cops and Mafiosi out of his mesmerizing hair, Priest will feel truly blessed. Priest’s activities were underscored, and at times contradicted, by a soundtrack written by soul music legend Curtis Mayfield.

Director X’s remake of “SuperFly” makes the title adjective one word but generally sticks to the Fenty’s story. Now and then, there is a minor bend in the road plotwise—a character is used for a different purpose, for example, and there are more villains to combat. But this is mostly a faithful adaptation, bigger yet not better. There’s far more violence in this iteration of “SuperFly” and it has a budget Parks and company couldn’t match in their wildest dreams. Yet despite all its occasionally entertaining bluster and '90s-era crime movie braggadocio, this is a surprisingly shallow take on a much more cagey and amoral original. Don’t get me wrong: The movie isn’t bad. In fact, it’s quite watchable despite being at least 20 minutes too long. But if I wanted what this movie is selling, I could have stayed home and watched “Belly” or “New Jack City,” both of which are better, more visually arresting and have a clearer sense of place regarding their respective settings.

Coincidentally, the movie that may have kicked off the era of movies like the aforementioned ones “SuperFly” evokes is 1990’s “The Return of SuperFly.” That film starred soap opera veteran Nathan Purdee as Priest, whose exploits were once again buoyed by Curtis Mayfield’s score. Mayfield teamed up with rappers like Ice-T, creating a torch-passing of sorts from which we can draw a straight line to this film’s hip hop heavy soundtrack by Future. Now, Future is no Curtis Mayfield, and unlike Mayfield’s “Super Fly” album, his music will not drastically change the way films employ songs. However, Sony’s pairing of a successful musician with a visual filmmaker is a clear indication that they’re trying to recapture the lightning in the bottle that beget the original film. So, comparisons between the two films are fair game.

Perhaps my expectations were set too high, especially where the visuals were concerned. Director X is a veteran of music videos, many of which have fantastic and distinctive looks, textures and editing techniques. By comparison, “SuperFly” is visually flat, relying too much on oft-repeated motifs of rap videos rather than the ingenuity I expected. By the fourth time someone “made it rain” around strippers or executed a gory shoot-out, I gave up on potentially seeing something new.

Additionally, the city of Atlanta is presented as a series of shorthand shots designed for people who either live there or have spent a lot of time visiting. Sure, we get landmarks and the famous places the intended audience knows and loves, but they never resonate with the characters the way their home city should. It feels like the viewer is in a glass-bottom boat, free to ogle the scenery without the benefit of experiencing it firsthand.

The new Youngblood Priest, Trevor Jackson, has the same presence as his 1972 predecessor. He’s believable as a dealer and a ladies’ man. He has stylish threads and an awesome ride. He’s adept at hand-to-hand combat, whether it be with adversaries or with Scatter (a fine Michael Kenneth Williams), the man who trained him in the fine art of strategic cocaine dealing. And his hair is hypnotic! I felt as mesmerized as I did when 7-year old me got my first look at Ron O’Neal’s silky ‘do. But Jackson’s hairstyle is a whole nother level of enviable fabulousness; not even Black Jesus flying through the air above me while squirting multiple packages of Dark ‘n Lovely on my head could make my hair look like that.

But I digress. Jackson aims for O’Neal’s cool delivery but at times he comes off as merely joyless rather than stoic. Jackson is quite adept, however, at believably delivering the colorful pearls of wisdom and advice scripted for him by Alex Tse. “This ain’t checkers, it’s chess!” says Priest’s nemesis and leader of rival set The Snow Patrol, Q (Big Bank Black), summarizing the criminal long con Priest is so good at playing. But when Priest is laying his philosophy on folks like his right hand man, Eddie (Jason Mitchell), he sounds more like your aunty than your pusherman. “When you keep dancing with the Devil, eventually he’s gonna step on your feet!” he warns Eddie. Lines like this make no sense whatsoever, but Jackson sells the hell out of them.

“SuperFly” works best when it’s attempting to bring elements of the original film up to date. Director X and Tse accomplish this with some very amusing in-jokes and timely commentary, from casting Outkast’s Big Boi as an Atlanta mayoral candidate to having someone utter “fake news” to naming an extremely corrupt and murderous cop something that rhymes with Kirk Franklin. They also give the film’s women more agency and far more power in this version, with the film’s biggest badass—it’s somebody’s Mom!—getting the “walk toward the camera after the carnage” shot normally reserved for male heroes. And characters played by Jennifer Morrison, Lex Scott Davis and Andrea Londo know as much, if not more, about crime than our anti-hero. Granted, the latter two figure in a shower-based menage-a-trois that received randy applause from my audience, but at least the leering camera is an equal opportunity exploiter.

The best way to describe why “SuperFly” doesn’t surpass Gordon Parks Jr.’s creation is to describe Director X’s take on the original’s infamous cocaine montage. Ron O’Neal objected to this sequence of people enjoying Priest’s product, saying it was “a commercial for cocaine.” Director X also scores his version to Mayfield’s incendiary “Pusherman,” but he shows people selling coke rather than enjoying it. Parks’ version forces you to think about who’s being affected by Priest’s capitalist migraine of million dollar glory; this film’s version refuses to consider the users at all, which eliminates the unease one felt when rooting for O’Neal’s Priest. While this doesn’t sink the movie, it makes its protagonist’s plight less complex than it should have been. You’ll have fun, but you won’t be challenged. 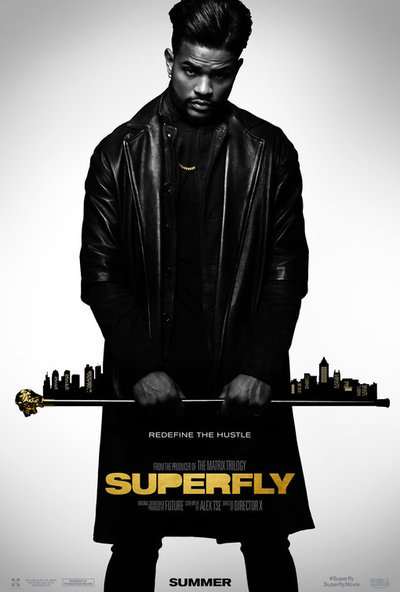