When you’re 21, you live like there’s no tomorrow. But even a few years later, add on a couple of responsibilities and you live like such a cheesy motto never existed. It’s funny how the difference between those attitudes can seem like a lifetime away, and it's often compelling to see filmmakers explore that juxtaposition. Such is the case of “Suntan,” a Greek film (I hesitate to specify it as comedy or drama) that observes how a 42-year-old man takes on the world as compared to a free-spirited young woman half his age. But while "Suntan" is more than just a tale about an older man becoming involved with a younger woman, it's unfortunately not as profound when it later claims to be a statement on the movie you think you're watching.

The story is familiar, intentionally so from co-writer/director Argyris Papadimitropoulos, who brings approximately one new idea to the mix. In the beginning, a lonely 42-year-old man (Efthymis Papadimitriou’s Kostis) moves to an island that is known for its dead winters and hedonistic summers. When that latter season finally hits after he arrives in winter, Kostis becomes accepted as a type of endearing novelty by a young woman named Anna (Elli Tringou) and her spontaneous, free-loving friends. The co-ed group are their own “Spring Breakers” troop, fooling around at the nude beach during the day and kissing each other at parties at night, often shouting about living for the moment. They try to pass those positive vibes onto Kostis, who is always awkward even when getting into his groove. Anna is amused by him most of all, and she opts to have some fun with him. The brief time he has alone with her shatters his isolated world, and he starts to become obsessed with Anna. As the story heads toward its aforementioned one new idea, “Suntan” shows an evil within Kostis rising to the surface.

It almost feels like a spoiler to say that this story of lively youth is from Kostis’ perspective. The camera doesn’t share his exact gaze, but it shows you what this very lonely man is thinking, especially in intoxicating scenes of partying with Anna, or sobering moments of standing out from the group. Papadimitropoulos paints a strong picture of atmosphere too, with the island introduced as a desaturated village where fun goes to die in the wintertime, where Christmas lights provide the only bright colors as the older men ruminate loudly in an empty bar about the young women soon enough coming to shore. It's a sharp contrast to the numerous pulsating party sequences, which create a thick hormonal air with jams like Hot Chocolate's "You Sexy Thing" or an electric guitar version of Ravel's intercourse metaphor "Bolero."

This limited perspective makes for a story in which the main characters are also intentionally, frustratingly not developed: he is quiet, strange, and seemingly way past his social prime; she is an object. It relies on the performance of Papadimitriou, who is not as compelling as he needs to be, especially with a character who reads like a Men's Rights Activist stereotype. The script's actions for him create some curiosity, but the psychology of the character is not intricate enough, his life overall not curious enough. That becomes a tedious void for the film as it goes from one party to the next, never more interesting than watching him trying to hang, clinging desperately to the reinvigorated reverie of youth.

"Suntan" finally becomes more than its pitch, and takes on a tone I never expected, in the third act. Any original impulses to say that this is mostly about youth or even maturity are challenged by the final, extensive shot, when Kostis' entitlement turns him into a monster, and a character that is not so interesting becomes simply repulsive. I’m sure that some people will accept the final events more, perhaps with empathy, but it feels like a gauche optical illusion—that you’ve actually been watching a low-key horror movie directly about toxic misogyny this whole time, instead of a very, very dry character study albeit told from the male gaze. It makes for a flat statement that would mean something more if it weren't the only memorable factor of the film, especially after you try to wash it off. 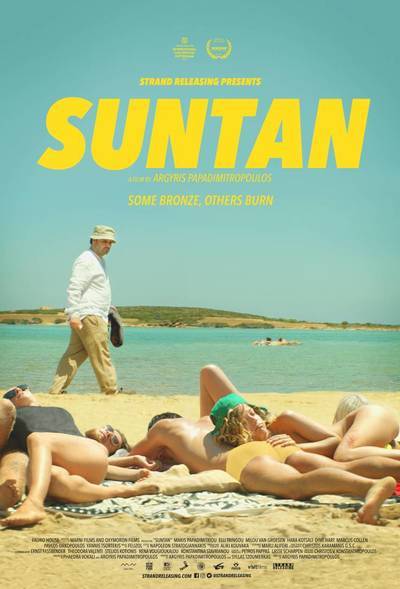