The opening sequence of Ed Burns' "Summer Days, Summer Nights" introduces all of the characters in an energetic seamless montage, the camera roving through the small houses, following a girl as she rides her bike down the street, waving to neighbors, each person heading out to greet the day. It's Memorial Day Weekend in a Long Island beach town. These characters all live there, i.e., they are "townies" or "locals," and they work at marinas, beach clubs, restaurants, catering to tourists and wealthy vacationers. Burns (and cinematographer William Rexer) toss you into the midst of the intersecting relationships of this small community. Everyone knows everyone, so this is an effective opening for this mostly-effective film. "Summer Days, Summer Nights" is purely an ensemble film. There is no one lead. Every character has their own arc, and their own reckoning to face about their lives. This is well-trod ground for Burns as a filmmaker (and in general), but there's no shame in well-trod ground, not if you care about the subject and present interesting characters, which Burns mostly does.

J.J. Flynn (Pico Alexander) just graduated high school and is spending the summer working for his dad (Burns) at a swanky beach club. He wants a different kind of life, so he pals around with rich kids and dates a rich girl (whose main characteristics are vocal fry and rolling her eyes). J.J.'s cousin Terry (Amadeus Serafini), a wannabe singer-songwriter, is staying with J.J. for the summer, working for the next door neighbor, a single mom named Claudia (Susan Misner) who manages a small marina. Claudia's teenage daughter Winky (Rita Volk) is in a funk because her rich boyfriend blew her off, and she sulks as she wipes down the boats at the marina. Claudia encourages Terry, a hottie with perpetual bedroom eyes, to befriend Winky. Suzy (Caitlin Stasey) a local girl who "got out," returns for the summer, and discovers that her high school boyfriend Frankie (Anthony Ramos) has been pining for her all this time. Debbie (Lindsey Morgan) works at the beach club with J.J. and a tentative relationship forms. Debbie is confident, J.J. is not. Some of these arcs work better than others. One arc doesn't work at all (Terry is supposed to seem cool and free-spirited, but instead he comes off as self-involved and pushy.)

Burns is interested in times of transition, when people are young enough to not know what they are doing, but old enough to start to feel the pressure. To a middle-aged person, these problems may seem slight, or even silly, but to those in the middle of it it is desperately serious. Burns gets that. There's not a lot of subtext in the script. Everyone says what they're thinking and feeling right as they're thinking and feeling it. They openly speak all exposition. This can lead to some repetitive devices: a lot of scenes start with dialogue like "So ... how're things between you and Frankie?" Frankie's best friend Mello (Jon Rudnitsky) is married to Suzy's best friend Lydia (Zoe Levin), and the two of them exist to talk to Frankie and Suzy about their problems. That being said, Mello is one of the most memorable characters in the film, with his Van Halen garb, Jon Bon Jovi bandana headband, and outsized extroverted personality.

The film does not fetishize the period, although of course it shows up in the clothes, the cars, and most obviously the soundtrack, featuring Duran Duran, The Cure, Chaka Khan, The Go-Go's. Some of the needle drops are a little on the nose (Eddie Cochran's "Summertime Blues" makes an obligatory appearance), but they set the mood and also meld with the summery mood, which Burns captures, in the block party, the fireworks on the beach, sand between your toes, the look of early morning, the feel of a season of freedom before things get serious. Burns has been around for a long time at this point, following his opening splash with 1995's "The Brothers McMullen," made on almost no budget, with no big-name actors. He has continued to make films, with small budgets or even micro-budgets. His current series, "Bridge and Tunnel," taking place in the same period as "Summer Days, Summer Nights," was put on pause during Covid, but it is slated to return. Burns has grown as an actor and has settled into middle-age comfortably. He was born to play straight-talking dads, and he's very good here.

A film like this is often called "nostalgic," but nostalgia is not the same thing as looking back on your youth and wishing you could have a "re-do" at certain moments, particularly in your twenties, as your identity solidifies, where questions like, "Is the choice I'm making right now going to haunt me later on?" start to take on weight. Is choosing this job opportunity or this relationship closing off doors forever that I might want to open again? The anticipatory fear of regretting things later on is the air most of the characters breathe in "Summer Days, Summer Nights."

It can feel navel-gazing in the extreme, especially since everyone has no problem speaking out all of these complex feelings at the drop of a hat. By the same token, this fear of regrets, where every choice feels crucial and irrevocable, is often what it feels like to twentysomethings. Burns' filmmaking is confident and his attitude is anti-sentimental. He captures the atmosphere of a town where a person can leave for five years and come back to find that nothing much has changed. A visit to a local pub means you run into half your high school class. I grew up in a beach town like this. Burns gets it right. 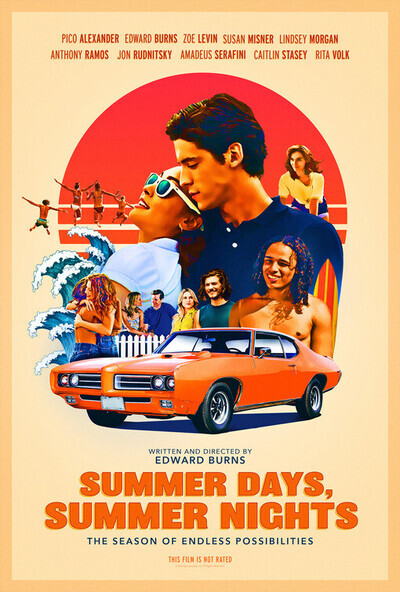