Ray Bradbury’s Fahrenheit 451 was assigned reading for my high school English class in 2003, and its dystopian vision had a profound impact on me. Little did I know that it foreshadowed our impending future of alternative facts, nonexistent privacy and “friends” confined in ever-present screens. Our collective sense of security may have been lost on 9/11, but there was still a great deal of innocence left in its aftermath, a truth beautifully captured in writer/director Becca Gleason’s debut feature, “Summer '03.” Its teenage heroine, Jamie (Joey King), is reading Bradbury’s classic simply to pass the time amidst lazy summer days, and only viewers of my generation will likely be distracted by the fact that she’s holding the 60th anniversary edition released in 2013, yet hopefully its recognizable cover will cause young viewers to seek it out in book stores.

Slight flaws in period detail are barely worth quibbling about in a satire like this, since it’s aiming to capture not the reality of adolescence so much as the heightened feeling of it. Bo Burnham’s “Eighth Grade” put most coming-of-age movies to shame with its brilliant portrait of junior high hell as experienced by an unpopular, inarticulate and utterly endearing girl. Elsie Fisher was cast in the lead role precisely because she was a shy kid trying to appear outgoing rather than the other way around. Shyness has never seemed to be a problem for Joey King, and her character of Jamie resembles every teen’s fantasy of what they would like to be—gorgeous, witty and confident even when succumbing to bouts of adorable awkwardness.

She is effortlessly verbal and extroverted except when the narration requires her to be otherwise, and I chuckled whenever Jamie visibly shuddered at the notion of public speaking. Yet King’s performance is entirely correct for the material, which works best as a distillation of the teenage psyche. How Jamie’s world is portrayed is dependent entirely on how she views it. Her parents’ cluelessness is so extreme that we can’t help siding with her when she lashes out at them. We share in her frustration when others neglect to treat her as the center of attention, particularly during a church service. And in the midst of her unjust grounding, she imagines breaking free of her captivity, bursting into the clear outdoor air with such carefree abandon that we can’t help but feel liberated.

Ever since she won over audiences with her blend of pratfalls and precociousness in “Ramona and Beezus,” King has proven to be an immensely appealing screen presence, and “Summer '03” may be her finest showcase to date. It’s arriving on the heels of her modestly-scaled, hugely popular Netflix rom-com “The Kissing Booth,” but Gleason’s film is quirkier and gutsier in its adult content, exploring teenage sexuality with a frankness that has earned it an R rating in theaters, though its online release will likely reach a wider audience in line with its target demographic. There’s an undercooked love triangle involving Jamie and her devoted friend, March (Stephen Ruffin), yet the primary focus is given to her fling with Luke (Jack Kilmer, son of Val), a boy in seminary training eager to sample earthly pleasures before being ordained.

Having just made a memorable impression in Eugene Kotlyarenko’s excellent “Wobble Palace,” Kilmer further solidifies his reputation as a promising talent by playing Luke not as a jerk or stereotypical hunk, but as a confused kid unaware of the consequence of his actions. He claims that he chose a life in the priesthood for its job security, a surefire recipe for disaster, and has no initial qualms with submitting to Jamie’s advances. Gleason takes a refreshing approach to their sex scenes, handling them with tenderness and honesty rather than treating them as a joke, though Jamie’s voice-over gets a laugh when articulating her first impression of Luke’s penis, which she dubs a “fleshy sock puppet.” The encroaching dread of getting caught is effectively conveyed by the sound of police cars ambling nearby.

Jamie’s tendency to smother her words in sarcasm is typical of the shields utilized by teenagers to cloak their inner vulnerability, and though the film’s screwball energy keeps things relatively sunny, neither Gleason nor King fail to take the central protagonist’s emotions seriously. King’s comfort may lie in the realm of comedy, but she has the chops to inhabit characters of all stripes, such as the bully played superbly by her sister Hunter in Amy S. Weber’s “A Girl Like Her,” who awakens to the pain she’s inflicted. If she were merely mugging for the camera, King’s galvanized expressions in the early scenes of “Summer '03” wouldn’t be nearly as hilarious. Setting Jamie’s summer of bad choices in motion is the death of her anti-Semitic grandmother, Dotty, played by June Squibb with the same deadpan outlandishness that made her Oscar-nominated work in “Nebraska” such a delight. One by one, she summons each member of Jamie’s family to her deathbed, were she dispenses insults, offensive advice and buried secrets, creating a cacophony of outrage that enables her to pass on with a smile on her face.

No attempt is made to put a warm and fuzzy spin on this plot thread, and had it not been played for laughs, it could’ve easily turned into “Hereditary”-style horror, with Squibb’s manipulative matriarch wreaking havoc from beyond the grave. After being ordered by Dotty to seek out a gay conversion camp to cure his alleged homosexuality, Jamie’s younger cousin (an underused Logan Medina) steals his parents’ car and nearly gets himself killed in the process. Distraught by his mother’s revelation that he never knew his biological father, Jamie’s dad (Paul Scheer) abandons his family to hunt him down, returning several days later with a cancer-stricken German who spews demeaning slurs at Jamie’s Jewish mother (Andrea Savage). Dotty’s most ardent instruction for Jamie is that she school herself in oral sex, an education her sexually experienced pal (Kelly Lamor Wilson) is only too happy to administer.

Echoing Scorsese’s “The King of Comedy,” Gleason serves up each layer of absurdity with a straight face, structuring an elaborate set-up for an uproarious punchline arriving in the form of Jamie’s climactic monologue, delivered at Dotty’s funeral. Rather than tie up the film’s numerous dangling plot threads in a tidily contrived manner, Jamie swings from them like Tarzan, cavorting through the embarrassment without ever becoming entangled in its strands. Some mistakes in life cannot be so easily laughed off, but “Summer '03” reminds us of a time where there wasn’t a sense of permanence to our choices, a freedom rendered impossible by social media and viral videos. Heartache that brought us to the depths of misery could evaporate in the morning light, and mortality was far from our most pressing preoccupation—the closest thing Jamie has to a religious shrine is her poster of Orlando Bloom. She may possess Dotty’s need for control, but like the generation that followed after her own, Jamie has not inherited the bigotry of her grandparents. Innocence may be, in fact, the most crucial difference between her and the young people of today. “Dotty didn’t like my mom because she’s Jewish,” Jamie incredulously declares from the church lectern. “I mean—it’s 2003, for Chrissakes!” 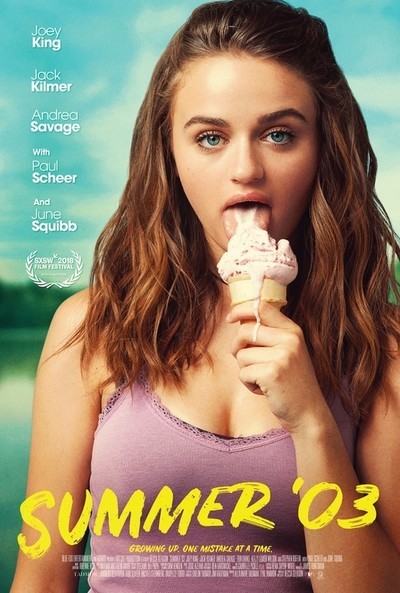