The only thing worse than hot garbage is elaborately lukewarm mediocrity, and for too much of its running time, the new comedy “Stuber” is just that. Directed by Michael Dowse from a script by Tripper Clancy, “Stuber” has a generic action-comedy premise: tough cop is incapacitated and forced to entrust himself to a fish-out-of-water who’s the antithesis of everything he aspires to/stands for.

His foil here is Stu (Kumail Nanjiani), whose line of work provides the contemporary culture upgrade (putative division): he’s an Uber driver. Just moonlighting, of course. He has another job at a sporting goods store working for a smarmy rich kid. He’s pouring all his money into a business venture with his best friend Becca who he adores and can’t tell and who of course walks all over him.

Vic, played by Dave Bautista, gets Lasik surgery on the very day he discovers he may finally be able to nail the drug runner who killed his partner a year back. Unable to drive or really even walk with any purpose (there are about ten minutes worth of gags recycled from Mr. Magoo cartoons, very fresh), he uses the Uber app forced on him by that adult daughter (Natalie Morales) who wants him to attend her art opening that evening.

His driver is Stu, who leases an electric car and is big on maintaining a five-star rating. To that end, he offers riders candies and water, but Vic isn’t having it. He hijacks Stu into L.A.’s Koreatown, then a male strip club, then a quasi-trap-house in Compton, then a veterinary hospital. This extends the Uber encounter uncomfortably, since Becca is drunkenly booty-calling Stu all the while.

The gags enacted in these locales are pretty much what you’d expect, but worse. There’s a bit in which the timid and indignant Stu accidentally shoots someone, and the point of the scene, no kidding, is that accidentally firing a bullet into another human being is one of the funniest things you can do. “Lighten up,” you might advise me, but hey, I can only convey my direct experience of the movie. I suspect that Canada-born director Dowse, best known for his 2004 techno DJ piss-take “It’s All Gone Pete Tong” is here, and in subsequent scenes of bloody massacre, making a point about the bloodthirstiness of Hollywood product in general. But what unfolds on the screen is not any the less ugly for whatever he might have been thinking.

So how does the movie earn the two stars I’m giving it? Kumail Nanjiani and, yes, Dave Bautista. Nanjiani is a near-genius of unprepossessing dryness even when the punchlines he’s obliged to deliver aren’t worthy of his expert handling. And Bautista, underneath his lumbering mass, is starting to get a little Lee Van Cleef thing going, performance wise. I hope he hones it in better movies. Watching these two go through the paces of this dreck is dispiriting. I kept thinking, Nanjiani knows the writers from “Silicon Valley,” and he’s married to Emily Gordon, who co-wrote “The Big Sick” with him; surely he could have tempted them to come on board and punch up a few jokes? But even if he had, it’s not clear they could have scrubbed off the lazy cynicism that pulses through all the nodes of this project. 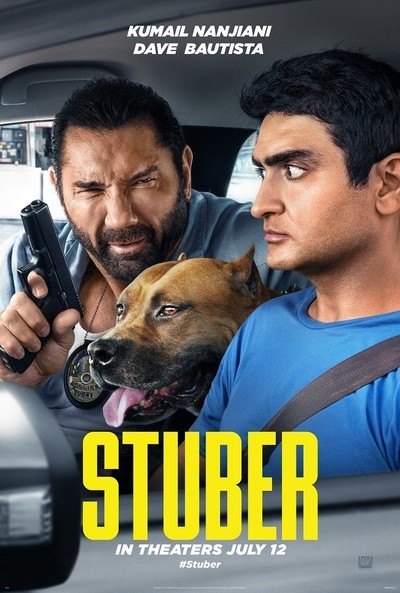 Rated R for violence and language throughout, some sexual references and brief graphic nudity.