Imagine you’re watching one guy give a testimony about how he survived a plane crash, one that happened to be one of the biggest tragedies in rock ’n’ roll history. The details are incredible: they were the one who talked sense to the bumbling pilots; they held the hand of singer Ronnie Van Zandt right before the crash; they pulled themselves out of the wreckage and ran for help. While watching this account, some historical reenactments are thrown in, in case you needed visual emphasis on what a rock 'n' roll gig looks like, or a reminder on '70s hairstyles.

Now imagine the reverse of that—also an honorable approach, initially—in which you’re primarily watching a dramatization of all these events, with the real guy chiming in so rarely about his story that he mostly registers as an endorsement. But here, there's little story, and it's not about the songs, just the suffering. That’s the surreal experience of trying to get through “Street Survivors: The True Story of the Lynyrd Skynyrd Plane Crash,” which feels like viewing only the dramatic reenactment parts of a far more interesting documentary, and being left with a movie that could easily be categorized as plane crash-sploitation.

Written and directed by Jared Cohn, "Street Survivors" is about the first-person experience of drummer Artimus Pyle (played here by Ian Shultis), who was with the band from 1974 until the crash in 1977, and later on from 1987 to 1991. In place of Lynyrd Skynyrd songs, it fills this gritless cinematic version of Pyle’s world with blips of story and tons of rock and roll ambiance—numerous unintelligible scenes of people partying and yelling. Ronnie Van Zandt (Taylor Clift) is painted as a Confederate Christ, and is shown beating up a guy for harassing a woman in one moment, and then forcefully ripping off another woman’s top right after. Meanwhile there’s Artimus, the dedicated, focused, and talented disciple that rock ’n’ roll history forgot, despite his central involvement in the crash on 1977, which killed six people on board, including Van Zandt.

Just as much as writer/director Jared Cohn believes in him, he is reverential to him—it presents him in narrative or documentary form as always the correct guy, a hero waiting for the call. And it ends with him being shown at modern times, rockin’ the kit during a small concert, and adored by fans. The narrative takes Shultis' version of Pyle from the day he gets hired by Lynyrd Skynyrd, to the moment he walks out of the hospital in slow motion, with barely an emotionally grounded passage in between. As it focuses very much on the plane crash, this is not a biopic about Pyle's time in the band, dealing with this trauma after, or how such an experience might have shaped him and others.

Instead, “Street Survivors” is fixated on simply reenacting Pyle's traumatic memory, including the physical pain of everyone on board. It brings to mind how director Peter Berg approaches his own tests of historic physical endurance, "Lone Survivor" in particular, in which the core drama is in seeing how much the characters can take, even if we know who makes it out alive. In this case, it's watching Pyle's broadly-drawn bandmates smash their heads into things in slow motion as the plane crashes into a forest, or watching them scream in agony, covered in blood while Pyle tries to pull out tree parts that have impaled them. But "Street Survivors" flunks out of Berg's school of depicting a gnarly true tragedy, as it's all exposition and very little tact, especially with its shameless dialogue which might peak at “My plane just crashed and you shot me!”

Cohn fought for a long time in the courts to tell Pyle's story. But while it's clear that he cares about this personal angle on this event, the approach is way off. "Street Survivors" becomes tone-deaf, especially when you realize you're miles away from learning anything about Lynyrd Skynyrd, aside from how some of them might have died. 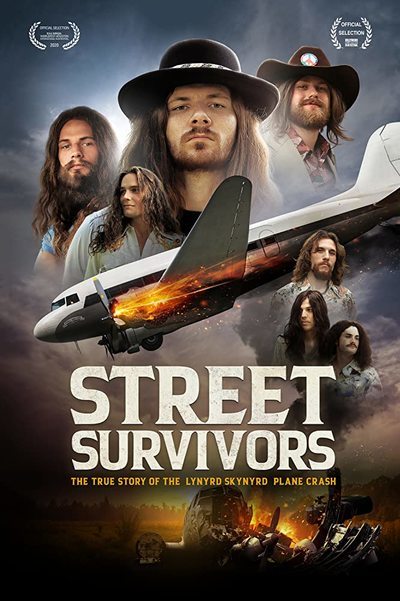