In white type over a series of black screens, writer/director/editor/cinematographer Elizabeth Lo presents several quotes from the ancients, beginning with an observation from Diogenes that “human beings live artificially and hypocritically,” and that they would do well to “study the dog.” And so Lo does, only she doesn’t study the dog in Hong Kong, where she was raised, or in the U.S., where she studied film. Instead, she travels to Istanbul, Turkey, which once had a policy of killing all stray dogs. Protests ended the policy not too long ago. Now it’s a crime to euthanize or hold captive any stray dog.

This creates a not-quite-ideal situation for such creatures. Humans in most international societies tend to think of cats as largely self-sufficient, and this was part of the lure of “Kedi,” a 2016 documentary about the street cats of, yeah, Istanbul. But because dogs are considered more overtly social creatures with at least a disposition to be involved with, or dependent on, people, stray dogs can be a bit more poignant than stray cats.

Zeytin, the sturdy mutt who’s the first of three dogs we get to know in this often camera-to-the-ground portrait, is a soulful looking beast, a heartbreaker at first sight. She runs around, goes up a hill, sniffs the butt of a dog with an owner, and then romps a bit with that creature. She then follows a bunch of street urchins of go to huff glue and nod out at a construction site. There she meets Nazar, who becomes a running buddy. The third dog is a mere pup, Kartal, a small black-and-white charmer who seems to mostly enjoy sitting and flopping.

Their interactions with people are pretty sad. Some scoff at them as they make their way through trash bins. A couple of tourists talk smack about Zeytin after they see her defecating on some grass. It takes a little while for the viewer to realize that Zeytin’s feelings can’t possibly be hurt by this.

This goes back to the Diogenes quote. It’s all well and good to feign piety over the fact that dogs are more themselves than people are, and one thing this movie tries to do is make you forget these differences of behavior are for pretty elemental reasons, one of which is the rather distinct difference between human consciousness and that of other mammals.

Dogs are authentic because they really haven’t much of a choice. And once we humans watch, say, Kartal seeming to pass out for unclear reasons—is the dog sick or merely sleepy?—we may wonder a bit about the conduct of the filmmakers. You know how at the end of many movies you get the disclaimer that “no animals were harmed” during its making? I was wondering if “Stray” would have a “no animals were helped” message at the end. Lo wants to make a point, obviously, but I came out of this picture with some questions. And I also thought of an observation made by the music critic Robert Christgau, a metaphorical point addressing a type of artistic preciousness: “If I found a cat trapped in a washing machine, I wouldn't set up a recording studio there—I'd just open the door.”

Now playing in theaters, in virtual cinemas, and on demand. 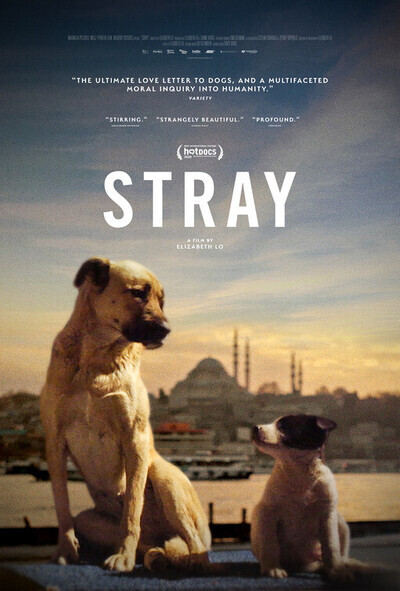