To give credit where it’s due, this lukewarm mess of a movie delivers what its title promises. The directorial debut of Adam Alleca, who also wrote the script (his best-known prior work was writing the execrable 2009 remake of “The Last House On The Left,” so yeah, whoop it up) “Standoff” spends much of its relatively brief running time in an isolated house you might imagine in a Grant Wood painting. On the first floor, Laurence Fishburne's Sade, dressed in black and rolling out a credible Alabama-ish accent, looking to kill a young girl who photographed him in the act of killing nearly half a dozen folks. On the landing to the upper floor, Thomas Jane's Carter—with his new pal, the girl with the inconvenient photography hobby, whose nickname is Bird (Ella Ballentine)—sits with a shotgun, a leg wound, and some untested grit.

This setting is at least more credible than the film’s opening, in which Fishburne’s character shows up at a funeral burial to shoot all the attendees. Killing folks in such a scenario does have the advantage of offering an immediately available burial plot, but it’s a little, you know, ostentatious. Unless the filmmaker stacks the deck, as he does at pretty much every opportunity here. He even puts a piano in the parlor of Jane’s house, so Fishburne can play a little scary music when he’s threatening Jane in the course of the cat and mouse negotiations.

The interplay between Jane and Fishburne, who are obliged to recite near-reams of tough-guy dialogue that does not even approach what one might call The Sub-Mamet, (“You don’t have the leverage you think you do, a**hole!” “(F**k leverage! Do the math, dips**t!” and so on) is pretty much what you’d expect from these very professional performers. (Fishburne’s hit man is one of those semi-profound types, even dropping the line from Samuel Johnson—“I forgot where I read it,” he says, nice—about the reason a man might make a beast of himself, which I’m betting Alleca got from the first page of Hunter S. Thompson’s “Fear And Loathing In Las Vegas,” in which it’s the epigraph.) The invocation of a dead child in the backstory of Jane's character borders on the amoral/exploitative, but there are worse problems in the world today.

To say that a hapless police officer and an unarmed wife are deployed like strategic chess pieces in Alleca’s scenario is to give too much credit to Alleca’s plotting/gaming abilities; he is plainly a checkers man. He does seem to believe, like many other filmmakers today, that putting both his characters and his audience through an endurance test is a sign of integrity. To this end, when both Jane and Fishburne get through their first encounter with mutual injuries, Alleca cross-cuts between the two foes performing elective self-surgery, complete with wound cauterization. When did this trend start? I think it was in a “Rambo” movie, but in any case, in “Standoff” the fun is doubled, just to make sure you wince, and the antagonists are shown to be two tough hombres. It is all very terribly tiresome. 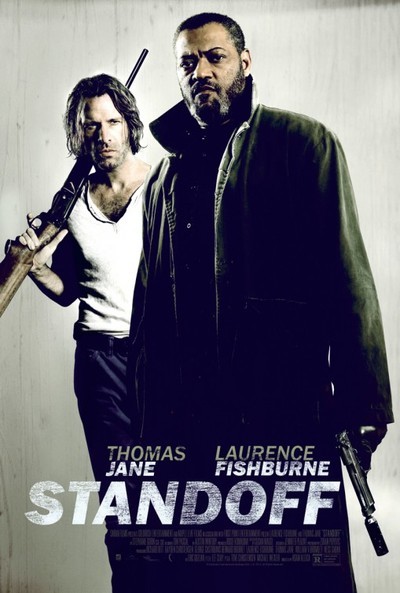 Ted Atherton as The Priest