In the movies, nuns are usually funny or scary. "The Sound of Music" is probably the most famous exception to the rule, although there are others, like the recent "Novitiate." Since I have a couple of actual nuns in my family, the comedic nun trope and the creepy nun trope doesn't have much resonance. The nuns in my family are smart, funny, regular people. But there's something "other" about nuns, especially pre-Vatican-II nuns, with their long black habits and swooping wimples. Catholicism, in general, is ripe for horror, with its ritualistic and "supernatural" aspects, its transcendence and mystery, martyrdom and sacrifice. Darren Lynn Bousman's "St. Agatha" goes so full-bore into the scary nun trope it's practically nunsploitation, and the mood he establishes—the look and feel of the claustrophobic "convent in the film—launches "St. Agatha" into a weirdo plane of phantasmagorical psychological and physical torment.

"St. Agatha" takes place in 1957. A young pregnant woman named, appropriately, Mary (Sabrina Kern) is transported to a home for unwed mothers, run by nuns, and hidden in a misty forest. There are ominous clues all around Mary on her initial approach, like a huge bear trap, spiked jaws open, in the middle of the path. She steps around it gingerly. The convent is a dilapidated white building, clapboard walls and rickety cupola on top, a grey statue brooding in front. Once inside, she is greeted by Paula (Trin Miller), a solemn woman with a scar across her face, who takes her to the Mother Superior (Carolyn Hennesy), whose silky voice, dyed red hair peeking out from under her wimple, and seething subtext of sexuality and control makes an alarming impression. She confides in Mary that "Rome" cut off the convent's funding since they didn't "approve" of her methods. Flee, Mary, flee!

From moment one, things are strange. Scratching sounds come from the upper floor, as though someone is trapped up there. The girls are not allowed to talk to each other. They live in terror of Mother Superior (who can blame them?) Scary things are seen through slats in the wall, underneath doors. When the girls "misbehave", Mother Superior's punishment is vicious. One girl is made to eat her own vomit. The girls are all drugged. Some of them disappear from the dormitory at night, never to be seen again.

Bousman made his name with the "Saw" series, and knows his way around horror and gore. There are elements in "St. Agatha"—particularly the opening—which are imitative of Zack Snyder's "Sucker Punch," but without the its propulsive, manipulative force. Slow-paced at first, with flashbacks showing Mary's life before, her drunk dad, her grifter boyfriend (Justin Miles), "St. Agatha" includes scene after scene of Mother Superior's torture techniques. The repetition gives the film a deadened quality. But in the second half (almost too late), when Mary devises a plan to break out, the film finds its sea legs, and the terror, torture and desperation builds its own crazy momentum. When black-habited nuns stand guard holding sniper rifles, ready to kill anyone who tries to leave, you know you're through the looking glass.

Much of the pleasure in "St. Agatha" is aesthetic. Bousman and director of photography Joseph White pull out all the stops. Since the film rarely leaves the house, they utilize every space to its fullest capacity. The camera floats through the rooms, swooping in fluid motions around corners, up the stairs, circling back down and around. The lighting design is specific and controlled. Yellow sun pours into a room hidden in dark blue shadows. The dormitory is monochromatic in blue night-shadows, with blazing orange light coming underneath the door. There's a basement room where red light screams through slates in the walls, like Hell's fires blazing outside. Jennifer Chandler deserves praise for her set decoration, which is a dream. The interior of the house is more like a brothel in a frontier town than a convent, highlighting the sexual hothouse in which all these women live. The front hall is cluttered with dark-flowered wallpaper and candle sconces everywhere. Every room in the house is beautifully conceived and captured. All of this gives "St. Agatha" a charge it might not have otherwise.

Carolyn Hennesy's performance as Mother Superior is the standout. She speaks in a crooning, sinister whisper, with ice-cold eyes and a smile that could cut glass. Mother Superior is a great villain, and Hennesy has so much fun with her role she's often the most interesting thing onscreen. Kern plays Mary as confused Alice-Through-the-Looking-Glass throughout, but her growing sense of desperation to get the hell out of there is nicely done.

"St. Agatha" may take too long to get going, but once the film is up and running it's perverse, overheated fun. 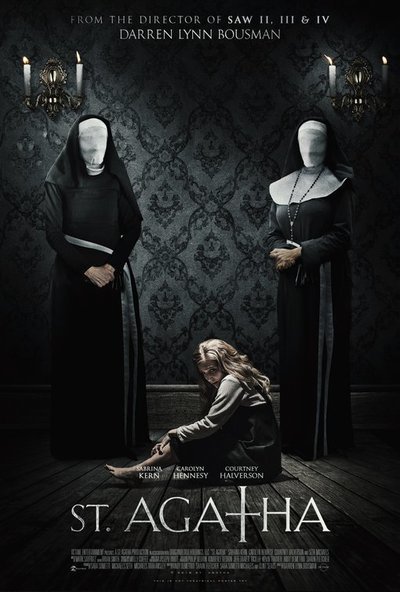