Not emotionally or psychologically, a la "Rebel Without a Cause." These teens actually, physically explode, without warning or explanation.

The heroine, sardonic outsider Mara Carlyle (Katherine Langford), doesn't know what to make of these lethal eruptions. No one else has a clue, either. It just started to happen one day. Blam. Goosh. The students never know which of them are going to blow up, or when. And yet they are expected to keep going to school and studying and worrying about graduating and getting into college and getting a date to prom.

If this sounds like a scenario ripe with metaphorical potential, well: "Spontaneous" is way ahead of you. To its credit, Duffield's adaptation never diminishes the eeriness of its premise by giving you a tedious scientific or supernatural explanation for the exploding teens and a roadmap to help them solve the problem and reset life to "normal." Something is very wrong here, and not only do the characters not know exactly what "it" is, they have to live in the not-knowing.

This vagueness lets you project your own associations onto the story. This could be a movie that is specifically about the epidemic of school shootings in the United States, a nation that loves guns more than children. Or it could be about fear of infection of one kind or another: although it was filmed before the 2020 pandemic, "Spontaneous" feels like a response to it. It also works nicely as a dark fantasy about the generalized fear of venereal disease in a youth population that's just started to be sexually active. It could also connect with viewers who worry that they'll become the victims of random terrorism, state-sponsored brutality against civilians, or wartime and post-war violence (citizens in lots of countries still worry about unexploded landmines from 10, 50, even 100 years earlier).

Somehow, ordinary life is supposed to go on. These teens have to go through all the usual hormones-and-maturity induced crises while worrying that the person sitting next to them in class might detonate, showering the classroom walls with blood and bone. Standard life milestones—such as Mara navigating a deep but fraught friendship with her best pal Tess McNulty (Hayley Law) or finding true love with her first serious boyfriend, the adorable and soulful Dylan (Charlie Plummer)—occur beneath the shadow of inexplicable horror.

Duffield has a strong and clear vision of what kind of movie this is, and he seems to be on the same page with his key collaborators, including cinematographer Aaron Morton, editor Steve Edwards, production designer Chris August, art director Cheryl Mason, and sound mixer Eric LaMontagne. The result is a movie that remains hypnotic and confident even when it starts to meander, repeating variations of the same situation.

The setups and payoffs are so similar that it gets to the point where you can predict the "unpredictable" moments. Whenever a minor character turns to a major character and starts yammering about something mundane, you expect the blam-and-goosh, followed by the inevitable Jackson Pollock-with-a-gore-hose effect on the walls and ceiling and on bystanders' clothes and faces and hands and shoes. One can argue that the tedious repetition of the shocks is part of the point (indeed of the film's aesthetic) and that you wouldn't have the same movie without the studied feeling of aimlessness. Adolescence can be dull even when it's horrendous.

In any case, there's no denying that the film is purposeful in its aims and effects, and that it doesn't move or feel quite like anything you've seen. There's a lot going on here direction-wise, from blatant shout-outs to earlier classics of youth drama and/or black comedy (including "E.T.," "Carrie" and "Dr. Strangelove") to music video interludes and fourth-wall-breaking touches (including a clever sequence in which Dylan narrates the tale of his long-gestating crush on Mara into the camera while leading her on a guided tour of her obliviousness). Duffield's elegant camera movements and editing patterns evoke Martin Scorsese and Paul Thomas Anderson in fast-paced montage mode. The camera never sits still when it can track, swish-pan, lunge, or dive.

But the sum never crosses the line into shallow virtuosity because the script and performances keep you anchored in the teens' troubled lives. There's a tug-of-war in their psyches between needing to seem as if they're in control at every moment, and realizing that they're stuck in a waking nightmare with no end in sight.

Whenever "Spontaneous" starts to run out of imaginative juice, it turns a tonal corner and either puts a smile on your face or wipes it off. The final 15 minutes are a knockout because they embrace the fact that yes, in fact, this all actually happened, and even though nobody can explain it yet, these kids are going to be living with the emotional aftermath for the rest of their lives, and the adults that were supposed to comfort them were helpless, too.

For transparency’s sake, it feels important to state that this film was screened via link despite its availability only in theaters until Tuesday, October 6th. The intent of this review is not to encourage or discourage anyone from attending a theatrical screening at this specific time. It is an analysis of the work itself for posterity. 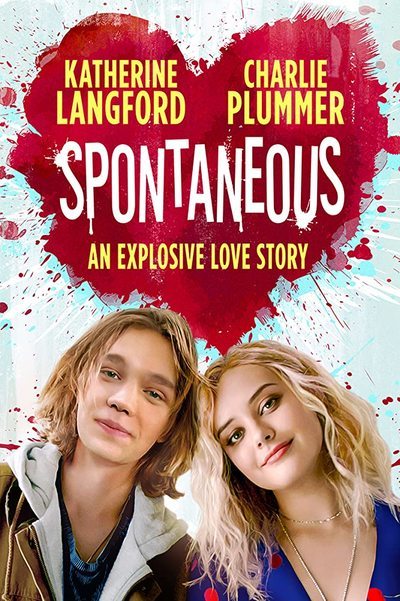