"Miyazaki's Spirited Away" has been compared to "Alice in Wonderland," and indeed it tells of a 10-year-old girl who wanders into a world of strange creatures and illogical rules. But it's enchanting and delightful in its own way, and has a good heart. It is the best animated film of recent years, the latest work by Hayao Miyazaki, the Japanese master who is a god to the Disney animators.

Because many adults have an irrational reluctance to see an animated film from Japan (or anywhere else), I begin with reassurances: It has been flawlessly dubbed into English by John Lasseter ("Toy Story"), it was co-winner of this year's Berlin Film Festival against "regular" movies, it passed "Titanic" to become the top-grossing film in Japanese history, and it is the first film ever to make more than $200 million before opening in America.

I feel like I'm giving a pitch on an infomercial, but I make these points because I come bearing news: This is a wonderful film. Don't avoid it because of what you think you know about animation from Japan. And if you only go to Disney animation--well, this is being released by Disney.

Miyazaki's works ("My Neighbor Totoro," "Kiki's Delivery Service," "Princess Mononoke") have a depth and complexity often missing in American animation. Not fond of computers, he draws thousand of frames himself, and there is a painterly richness in his work. He's famous for throwaway details at the edges of the screen (animation is so painstaking that few animators draw more than is necessary). And he permits himself silences and contemplation, providing punctuation for the exuberant action and the lovable or sometimes grotesque characters.

"Spirited Away" is told through the eyes of Chihiro (voice by Daveigh Chase), a 10-year-old girl, and is more personal, less epic, than "Princess Mononoke." As the story opens, she's on a trip with her parents, and her father unwisely takes the family to explore a mysterious tunnel in the woods. On the other side is what he speculates is an old theme park; but the food stalls still seem to be functioning, and as Chihiro's parents settle down for a free meal, she wanders away and comes upon the film's version of wonderland, which is a towering bathhouse.

A boy named Haku appears as her guide, and warns her that the sorceress who runs the bathhouse, named Yubaba, will try to steal her name and thus her identity. Yubaba (Suzanne Pleshette) is an old crone with a huge face; she looks a little like a Toby mug, and dotes on a grotesquely huge baby named Boh. Ominously, she renames Chihiro, who wanders through the structure, which is populated, like "Totoro," with little balls of dust that scurry and scamper underfoot.

In the innards of the structure, Chihiro comes upon the boiler room, operated by a man named Kamaji (David Ogden Stiers), who is dressed in a formal coat and has eight limbs, which he employs in a bewildering variety of ways. At first he seems as fearsome as the world he occupies, but he has a good side, is no friend of Yubaba, and perceives Chihiro's goodness.

If Yubaba is the scariest of the characters and Kamaji the most intriguing, Okutaresama is the one with the most urgent message. He is the spirit of the river, and his body has absorbed the junk, waste and sludge that has been thrown into it over the years. At one point, he actually yields up a discarded bicycle. I was reminded of a throwaway detail in "My Neighbor Totoro," where a child looks into a bubbling brook, and there is a discarded bottle at the bottom. No point is made; none needs to be made.

Japanese myths often use shape-shifting, in which bodies reveal themselves as facades concealing a deeper reality. It's as if animation was invented for shape-shifting, and Miyazaki does wondrous things with the characters here. Most alarming for Chihiro, she finds that her parents have turned into pigs after gobbling up the free lunch. Okutaresama reveals its true nature after being freed of decades of sludge and discarded household items. Haku is much more than he seems. Indeed the entire bathhouse seems to be under spells affected the appearance and nature of its inhabitants.

Miyazaki's drawing style, which descends from the classical Japanese graphic artists, is a pleasure to regard, with its subtle use of colors, clear lines, rich detail and its realistic depiction of fantastical elements. He suggests not just the appearances of his characters, but their natures. Apart from the stories and dialogue, "Spirited Away" is a pleasure to regard just for itself. This is one of the year's best films. 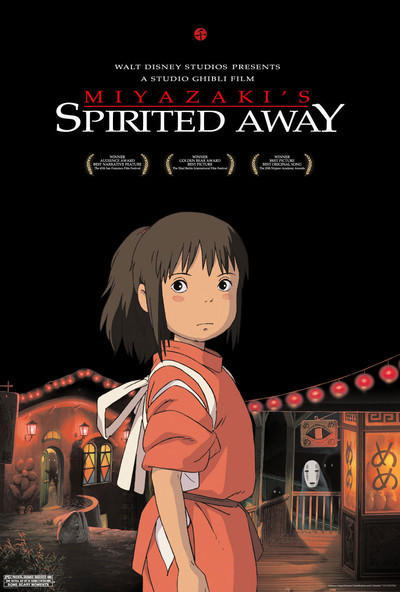