The first 45 minutes of the amateurish based-on-a-true-story "Speed Kills" are pretty rough. Some preliminary scenes are supposed to be disorienting, but many of the movie's creative decisions barely make sense: there are abrupt smash-cut edits, poorly choreographed and photographed motorboat racing scenes, and voiceover narration that rushes viewers through key plot points. I had to rewind a handful of key scenes—which set up reluctantly mobbed-up motorboat racer and designer Ben Aronoff (John Travolta) as the Henry Hill of Miami—just to confirm that they are as tepid and un-involving as they initially appeared. The film's Gerber-bland back half is plenty bad, but the first half of "Speed Kills" features some of the year's worst filmmaking.

In the film's table-setting first scene, Aronoff's life is threatened (by character actor Tom Sizemore, no less) before we even know what's going on. Sizemore's baddy says his boss wants to rent a boat, but Aronoff won't return his boat-related calls. Why can't he just take some money in exchange for a boat? (Meanwhile: a giant boat called "The Cigarette" looms over Sizemore.) Travolta then steps out of Aronoff's office and says something like, Ok, Tom Sizemore, I will give your wealthy boss a boat. Tell him to come by my office, and pick the boat out. That's not good enough for Sizemore's heavy, who makes some random-seeming comments about loyalty:  "I'd do anything for my boss. Anything—and everything. I'd never turn my back on my boss." Then John Travolta gets shot while pulling out of his boat store's parking lot. After that: boom, the film flashes back 25 years, and we learn how John Travolta's boat-having dude came to be threatened by Tom Sizemore's boat-seeking man in Miami.

Somewhere unspecified in New Jersey, 1962: Aronoff is using a pay phone. Some guy named Meyer Lansky (James Remar) has threatened Aronoff's construction business, so Aronoff decides to flee to Miami, where he falls in love with boats. We don't know why he falls in love with boats, mostly because it's hard to tell what exactly you're looking at in the first few scenes where Aronoff drives/rides around in speedboats. There's a bunch of poorly assembled clips of guys in boats, lazily circling each other and laughing with joy. There are also some hastily stitched-together shots of Travolta's Aronoff smiling behind sunglasses while his competitive(?) co-pilot Knocky House (Mike Massa) laughs heartily by his side. There's also some all-time-low voiceover narration from Travolta, who, as Aronoff, makes boisterous, but unspecific declarations like: "And boom, just like that, I was in love. The speed, the water, the rush: I wanted it, I needed it, I would have it." I still don't really know what "it" is, but I imagine it's boat-racing? Maybe boat-building? A boat-related sex metaphor? (there's three or four lines of dialogue that refer to how "sexy" speed-boats are, though that quality's hard to convey when your boat footage looks like it was spliced together with a cheese grater).

Honestly, the only thing to do if you're confused while watching "Speed Kills" is to just keep right on watching. Some answers are inevitably forthcoming, though not enough to redeem the film. Lansky is a mobster, and he gave Aronoff money. So Lanksy wants Aronoff to use his boat business--by the way, after winning a bunch of races in a montage, Aronoff becomes a boat salesman—as a front for Lanksy's drug business. Also, Lansky has a pushy nephew named Robby Reemer (Kellan Lutz), though Robby doesn't become important until the DEA starts to close in on Lansky's business, and inevitably puts the squeeze on Aronoff too.

Ben Aronoff's problems are all haphazardly compartmentalized in brief tangental sub-plots. He has an estranged son named Andrew (Charles Gillespie), who gets into a life-threatening accident, just to get his father's attention (it works, for a scene or two). Ben also falls in love with and marries under-developed New York trophy wife Emily (Katheryn Winnick), though that relationship doesn't become important until screenwriters David Aaron Cohen and John Luessenhop need us to worry about Ben. Look, I'm still unsure what the deal with "Speed Kills" is. Did somebody (ok, a lot of somebodies) lose a bet? What's the deal with Travolta's shoe-polish brown Chia astro-turf hair piece in the film's 1962-set scenes? Why are all the boat scenes as dull as they are? More importantly: why should I care what happens to Ben Aronoff, a character who says a lot about what he cares about, but whose creators never give us good reasons to share his concerns? Ben's romance with Emily is as flat as mosquito-filled swamp-water, his relationship with Andrew is barely a thing, and his boats aren't very sexy. I can't recommend "Speed Kills" to anyone because it's not even good enough to gawk at. 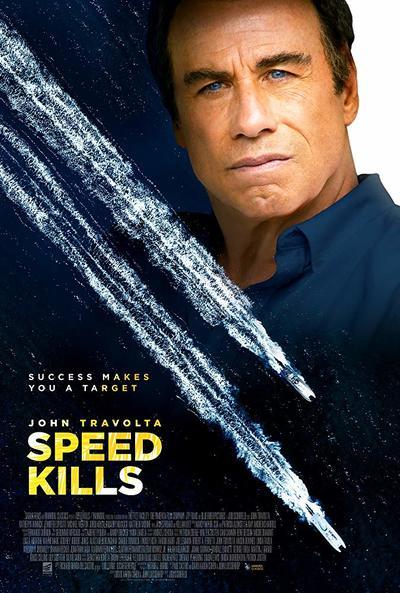 Rated R for language, some violence and drug material.

Writer (based upon the book "Speed Kills" by)