Donnie Yen ("Ip Man", "Dragon") returns to contemporary action with "Special ID," an action film that will test the critical sensibilities of those most loyal to the martial arts genre. There are three remarkable fight scenes in Clarence Fok Yiu-leung's film; the kind of sequences that will demand inclusion in any clip reel of Yen's career. There's also a fight in and out of a moving car that dazzles with its clear lack of VFX. You can feel the pavement whizzing by and the danger feels real. Four scenes (although the car chase really leads into the final fight so it's more like three); you can get popcorn or read a book during the rest of the movie. The narrative tissue that connects these scenes is so inconsistent, clichéd, and unengaging that even Yen's loyal fans will have to issue caveats with their recommendations. "Oh, the movie's no good, but did you see that scene on the overpass?!?!"

Detective Chen Zilong (Yen) is so deep undercover in the criminal underworld in Hong Kong that he fears he will never come back. He's known as Dragon to his fellow criminals; few know of his true identity as a man of the law who dotes on his philosophical mother (Paw Hee-ching). When an old adversary to the Triads named Sunny (Andy On) starts making waves, Chen has to stop him before his cover is blown and all-out Triad warfare ensues. Naturally, there's a gorgeous young cop named Fang (Jing Tian) to help out.

An undercover cop, a potential love story, Triads–what could go wrong here? It's a lack of depth and consistency. The film has all the right beats for a dark martial arts thriller but can't find the rhythm. Writer Szeto Kam-Yuen dutifully checks off the clichés but there's no passion in it; nothing is given any time to develop, possibly due to reported problems during production that led to a number of project revisions. Yen often looks lost in terms of character as the film's tone bounces around from "Infernal Affairs" thriller to buddy comedy to something else entirely. Tian makes the most memorable impact, bringing the piece a much-needed energy whenever she's on-screen. On is typically physical but poorly developed as a villain.

And so we have a potential love story that never goes anywhere, a rivalry with his returned nemesis that's undercooked, and bizarrely long scenes with mom that feel pulled from another film. The movie opens with a bang, starting with a fantastic fight sequence after a game of Mahjong that hints at a gritty, intense action flick to come, and then there's not another moment of "fist meet face" for over 20 minutes. And you won't care about what happens in those 20 minutes.

And yet it's impossible to deny that what "Special ID" does well it does extremely well. The great cinematographer Peter Pau ("The Killer", "Crouching Tiger, Hidden Dragon") can shoot a fight scene at night in the rain as expertly as anyone in this business and the stunt direction by Bruce Law ("Man of Tai Chi", "The Raid 2: Berandal") is remarkable. When the fight scenes really get going—as in the first scene, a Yen-versus-dozens centerpiece that starts in a restaurant and spills out into the street, and the amazing final sequences on the overpass—"Special ID" is something to behold. It's just a shame that those peaks are so drastically offset against the film's many narrative valleys. 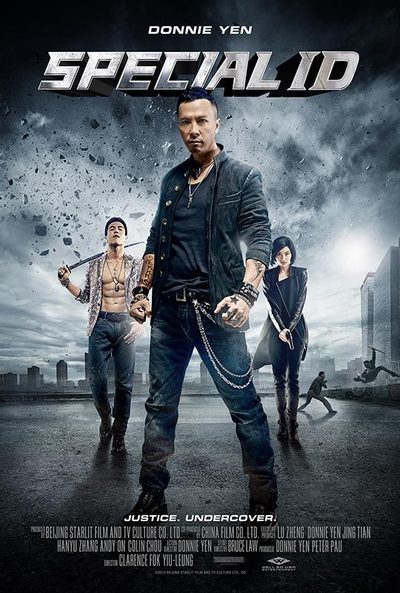 Andy On as Sunny