In the 1920s, the golden age of silent films, millions of Americans bought tickets every week to see movies like "Souls for Sale." It isn't on any list of great movies I've ever seen, possibly because hardly anyone had seen it for more than 75 years. When it has played over the last few years on Turner Classic Movies, it's possible more people saw it than in all the decades since it was released in 1923.

This is a prime example of the mid-range entertainment Hollywood was producing so skillfully at the time. Filled with actors who were then stars, fast-moving, entertaining, with a spectacular circus action sequence at the climax, it is drama, melodrama, romance and satire all at once -- wrapped up in a behind-the-scenes look at how a desperate young woman fell into the movie business by accident and became a star.

The story involves the memorably named Remember Steddon, played by Eleanor Boardman as a wide-eyed girl from a rural town who literally leaps off the train on her honeymoon to escape her new husband (Lew Cody). He swept her off her feet in a whirlwind courtship, we learn, but now he fills her with loathing; and no wonder, because he's a snaky operator with a skinny mustache and a history of marrying women and killing them for their insurance money.

Produced by Samuel Goldwyn, obviously not on a limited budget, it's also an exploitation of the national fascination with Hollywood and its transgressions. The Fatty Arbuckle scandal of 1921 would have been in audience minds as they saw the milk-fed maiden venturing into the den of iniquity. Remember's father is a preacher who lectures on the sins of the movies, and she believes what she hears.

But what is a girl to do? Stranded in the California desert after escaping from the train, she staggers under the burning sun and is close to death when she's rescued by a sheik on horseback. Is he a mirage? Not at all. He's an actor making a film. Poking fun at Valentino, a title card notes: "The usual sheik led the usual captive across the usual desert." The girl is nursed back to life by the filmmakers and taken to Los Angeles.

Already two of the movie men are in love with her: Richard Dix, as the film's director, and Frank Mayo, as the actor on the camel. But Remember is mindful of her father's warnings and stays clear of the movies until desperation drives her to seek a job. This sets in motion a fascinating backstage story in which we follow her as she gets past the studio gates, is rebuffed by a casting director, is befriended by the director and gets work as an extra.

Goldwyn must have called in a lot of favors, because there are cameo roles showing Charles Chaplin directing a scene while puffing furiously on a cigarette, Erich von Stroheim allegedly working on "Greed" and such other stars as Barbara La Marr, Jean Hersholt, Chester Conklin and Claire Windsor.

Remember is given a screen test, miserably fails, weeps when it is screened and is told by Dix: "If you could only cry that well on camera." Of course, she can. He also gives her some very modern advice: "Don't try to act funny. Justfeelfunny. The camera photographs exactly what you are thinking of." He then helpfully promises her: "I'll make an actress of you if I have to break your heart and every bone in your body."

Eleanor Boardman is a spirited screen presence, a big star in the decade, who married the important director King Vidor and starred in his masterpiece "The Crowd" (1928). Her female co-star in "Souls for Sale" is another silent legend, Mae Busch, who appeared in 131 roles between 1912 and 1947, most notably with Laurel and Hardy in "Sons of the Desert" (1933). Here her character's tragedy provides Boardman's big break: The newcomer takes over her starring role after a heavy overhead lamp falls on her: "She may not walk for a month -- if ever!"

The movie was written and directed by Rupert Hughes, who was the uncle Howard Hughes so fatefully decided to visit in Hollywood. He adapted it from his own novel, which was serialized in Redbook magazine, and judging by his title cards, he was well aware of how absurd his plot was. After the treacherous husband discovers his wife has disappeared from the train, he returns to his seat and -- goes to sleep. "Why didn't he tell the conductor and stop the train?" a title card asks, not unreasonably. Indeed, there are times when the titles seem to be doing the work of "MST 3000," providing a sardonic commentary on the action. One card observes: "That seasick camel is a regular osteopath."

"Souls for Sale" provides a pointed commentary on Hollywood's practice of putting the schedule above all other considerations. The climactic scene takes place during the filming of a circus scene. A violent storm is planned to threaten the Big Top, and a huge mounted propeller is brought in to generate wind. If the director warns people not to walk into that fan once, he does it three times. Then a real storm blows up, lightning strikes the crew's generator, the circus tent catches fire, Remember's evil husband turns up from his refuge in Egypt (she's afraid her lovers will discover she's already married, not knowing he was a bigamist), and the wind machine becomes a lethal weapon. But the animals in the menagerie are saved.

"Keep cranking until the flames grow too hot!" the director tells his camera crew. The Big Top goes up in a spectacular conflagration, there is a violent death (preceded by a heartfelt speech), and then, can you believe, with an ambulance hauling the deceased away, the heartless director asks Remember if she could possibly act in one more scene. She can. What a trouper. You can't tell me Rupert Hughes wasn't grinning when he wrote this.

He also seems to have had an open mind about camera possibilities. In a scene involving the setup for a studio scene, he hurries along with little jump cuts. His framing is fairly standard, but he doesn't overuse closeups, and the editing is brisk. The titles, when they come, are not used only for dialogue or information, but also sometimes seem to supply Hughes' own comments as he looks at his picture.

There's one little moment I'm curious about. Like so many silent films, "Souls for Sale" is not all in black and white, but uses a great deal of color tinting. Red for the desert, sepia for indoors, blue for night, a little yellow hand-painted in for the flames of the circus tent. When Remember and the wife killer are on the rear observation platform of the speeding train, the scene is tinted for night, but when he decides they should go inside, there's a quick shot of him, still outside, tinted sepia. Why's that there? Foreshadowing?

"Souls for Sale," popular on its release, was thought to be lost for many years. A few prints were discovered, and when the IMDb user "wmorrow59" saw one at the Museum of Modern Art, it was "badly tattered in places, with a confusing turn in the plot at one point, which suggested that a chunk of footage must be missing."

Since then the film has been restored; its first DVD version was released last month by Warner Bros. and Turner Classic Movies and looked remarkably good, considering its perilous survival. A new score has been added by Marcus Sjowall, part of TCM's Young Composers Competition, and the result is a lively and funny experience, enriched by the backstage rags-to-riches story; we see lots of sets, props, costumes, cameras, crew members and, of course, that one unfortunate overhead light.

Title cards near the end reflect the blessing of Sam Goldwyn, if not his penmanship, in praising the toilers of Hollywood for their dedication in bringing our dreams to the screen. And despite the town's reputation, Remember Steddon will be a virgin on her wedding day.

"Souls for Sale" on DVD is part of the Warner Bros. Archive Collection. 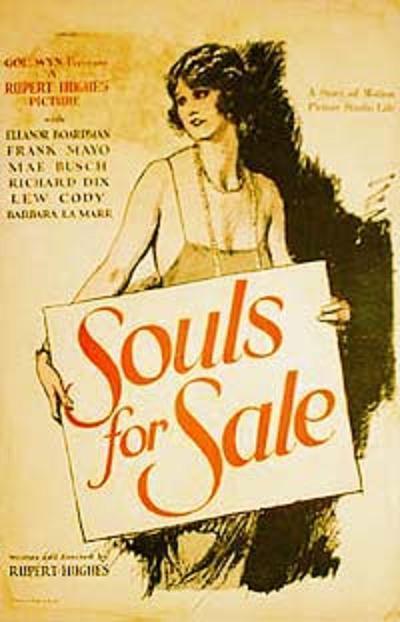