Sorry We Missed You

As jobs are "outsourced" in an increasingly borderless world, the manufacturing of everything from cars to cellphones to software is sent to countries with cheaper labor and laxer rules about worker safety and environmental impact. Consumers order online instead of in person. And so, the few remaining employment opportunities in established economies are those inextricably tied to place. In the devastating "Sorry We Missed You," from British director Ken Loach and writer Paul Laverty, characters have two can't-be-exported jobs. Rickey Turner (Kris Hitchen) delivers packages of online purchases (mostly made in other countries). His wife Abby (Debbie Honeywood) is a "carer," a home health aide for the elderly and disabled.

It is not just worker protections that are gone. The remaining jobs are now a part of the gig economy and basic human interactions are almost entirely extracted. Rickey's every move is dictated by a hand-held routing device called a "precisor." The human supervisors are scarcely less mechanical. They are being clocked by machines as well, every millisecond tied to money paid in or out. One piece of equipment issued to Rickey is not exactly high-tech. It is a glass bottle to pee into while he's out on deliveries as there is no time in the system for bathroom breaks. Abby is on a "zero-hour contract." She is not paid for break time, sick days, travel time, or vacation. In theory she can turn down any visit, but if it means there is no one to take care of the people she hates referring to as "clients," she is too devoted and soft-hearted to say no.

The film has a lot to say about the failures of modern society but Loach makes sure that the story is about the characters, not the issues. Laverty's script has dozens of subtle, telling details that make us feel their agonizing dilemmas more sharply. When Abby tells one of her clients that she and Rickey were about to buy a house before the financial meltdown caused the collapse of the deal before it went through, she has no rancor and no sense of being victimized. She accepts it as something that happened to everyone. She says her only rule for working with the clients is to treat them "like your Mum," and she is always kind, patient, and compassionate with them, even when it costs her time or money. She assures one of them that she gets back more than she gives. And when another asks to brush her hair, Abby's single tear lets us know how meaningful that small gesture of tenderness is, and how rare. Rickey, increasingly desperate as his teenage son Seb (Rhys Stone) becomes withdrawn and gets into trouble, pleads with him to "give yourself some options" and go to college. "I wanted better for you," Rickey says. But Seb does not see better chances ahead. His friend went to college and now has staggering student loan debt and a job in another gig economy opportunity—a call center. Rickey will endure any hardship to help his family. But if he cannot provide "better" for Seb, he has failed.

This film follows Loach's Palme d'Or winner "I, Daniel Blake," which broke our hearts with the story of good people destroyed by an initially well-intentioned but crushing and impersonal bureaucracy. It showed a social safety net designed to help the poor and sick but so constricted by rules to increase efficiency and prevent abuse that it is unable to recognize simple but essential human need.

Like "I, Daniel Blake," "Sorry We Missed You" is as intimate and immersive as a documentary. Emphasizing their parallels, both begin the same way, in darkness, the main character being asked a prepared list of questions. Here it is a job interview, or at least that is what it seems at first. Rickey is telling someone about his work history. He's done a little of everything, he says, including construction and landscape work. "I've even dug graves. I've done it all ... I'd rather work on my own and be my own boss." The man interviewing him is Mulaney (newcomer Ross Brewster, making his first film after a career as a policeman). He quickly picks up on Rickey's comment and tells him that if he comes to work at the delivery service, "You won't be working for us; you'll be working with us." He introduces Rickey to a new vocabulary. "No wages, but fees. No clocking in; you become available." Rickey will not be an employee; he'll be an owner-franchisee. He will be "master of your own destiny, not like the losers."

"Your dad's going to start his own business," Rickey proudly tells his children, Liza (Katie Proctor) and Seb. If that means he has to buy a van, selling the family car so that Abby will have to take the bus to her home visits, well, it's an investment in their future, and he'll make the money back, right? And yes, it will mean more time away from each other and the children, but they'll understand that it's all for them, right? And if there is a crisis at home, the boss will let him take a day off, right?

The trust that Rickey and Abby have is based on their own simple goodness. It is literally inconceivable to Rickey that the world could be so harsh. We get hints from Abby that she experienced harshness when she was growing up. What she cannot imagine is that the safe place she was so sure she could create with Rickey could be so precarious.

The layered title "Sorry We Missed You" refers both to the false concern of the stickers left on homes when no one is there to receive the packages, and to those like the Turner family who are chillingly abandoned by the companies that pay them (it can scarcely be referred to as employment). Beautifully performed with searing honesty and naturalism by the entire cast, the one reassuring note is that sometimes someone like Loach is there to make sure that stories like these, people like these, are not missed, but seen. 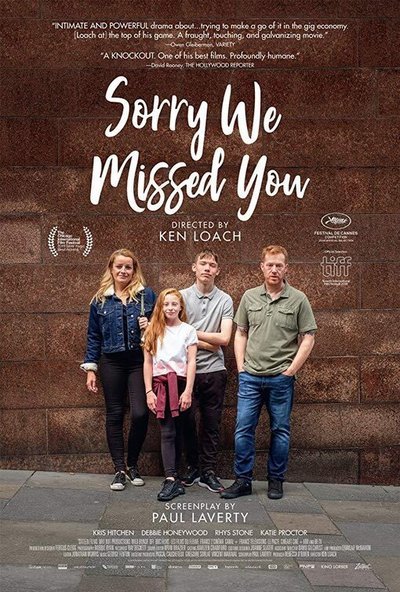