The specter of AIDS looms through “Sorry Angel,” the new drama from French filmmaker Christophe Honore, but to dismiss it merely as just another drama about the disease would do it a disservice. Instead, it is merely one component in this often engrossing drama about the relationship that develops between two men who come together when both are at very different points in their respective lives. Both sprawling and intimate, it tells a story dealing with life, love, friendship, mortality and, yes, AIDS, in a manner that is relentlessly and deliberately unsentimental in tone but which nevertheless proves to be quite affecting.

The film takes place in 1993, a period of time in the history of AIDS landing between the shock and horror of its initial discovery and devastation and the medical, technological and social advances that would go on to reshape how the illness and its victims would be perceived to the world. For Jacques (Pierre Deladonchamps), a reasonably successful Paris-based author in his late 30s, the disease is just another fact of life to deal with, in his case by sharing his apartment with Marco (Thomas Gonzalez), an ex-lover with a far more advanced case than his and alternating between tenderly caring for him and responding in an unnecessarily harsh manner when Marco tries to make what he thinks is his final goodbye to Jacques' young son, Louis (Tristan Farge). For Arthur (Vincent Lacoste), a college student from Breton who is still wrestling with his own sexual identity (he has a sort-of girlfriend yet sneaks off to have sex with strange men) it is another aspect of the life experience that he hopes to gain by one day moving to Paris himself.

While in Rennes to check out a play based on one of his works, Jacques slips into a movie theater showing “The Piano” and meets Arthur. There is an undeniable chemistry between the two but after their first rendezvous, the two seem to come away with different attitudes—Jacques comes across as more removed from the proceedings, more interested in educating the younger man about art and literature than in anything else while Arthur is more driven by his youthful excitement at the freedom that Jacques’s life represents to him. As the relationship between the two develops, albeit in unexpected ways, other characters turn up in their lives as well, ranging from Jacques’s gay neighbor, Mathieu (Denis Podalydes), to the hitchhiker that he picks up on the road—with the sort-of girlfriend in the car with him—for a brief tryst. It all builds slowly and carefully to a series of events that someone like Jacques may look upon as just another fact of life when seen from the outside but which proves to have a much deeper impact when it happens to him.

Honore is a filmmaker whose works have veered between relatively realistic narratives like “Ma Mere” (2004) and “The Beautiful Person” (2008) and more fanciful projects like the musicals Love Songs” (2007) and “Beloved” (2011) and the odd comedy fantasy “Sophie’s Misfortunes” (2016). In the past, I have preferred his more offbeat films but “Sorry Angel” is arguably the best of his more straightforward works and is certainly his most consistent project since “Love Songs.” He clearly knows the usual tropes and cliches of LGBTQ cinema and deftly avoids them in any number of intriguing ways—the manner in which he contrives to inform Arthur that Jacques is HIV-positive is especially inspired.

On paper, the story may sound like a mawkish melodrama but it proves to be a good deal more clever and resourceful. And when it does get to the more dramatic beats, Honore handles them in a way that avoids the overt jerking of tears while still allowing the emotions to come forth in a direct and affecting manner. He also does a marvelously effective job of evoking the specific era in which the story is set, not just in the easy aspects like decor (including clunky CD players and answering machines) and music (with judiciously selected cues ranging from “Pump Up the Volume” to the Cowboy Junkies’s rendition of “I’m So Lonesome, I Could Cry”) but in the attitudes the characters had regarding themselves and their situations at that particular point in time. He also gets fine performances from the entire cast, especially the central ones from Deladonchamps and Lacoste, both of whom are fantastic here.

Because it is a relatively high-profile French film dealing with LGBTQ issues, “Sorry Angel” will no doubt find itself being compared to such previous works as “Savage Nights” (1992), “Blue is the Warmest Color” (2013) and “BPM (Beats Per Minute)” (2017). While it shares certain thematic elements with each of those films, this is a film that has both a narrative and an approach that transcends the expected cliches in order to give viewers a more ambitious experience. When it does work, which it does most of the time, it does so with a power and emotional truth that cannot be denied. 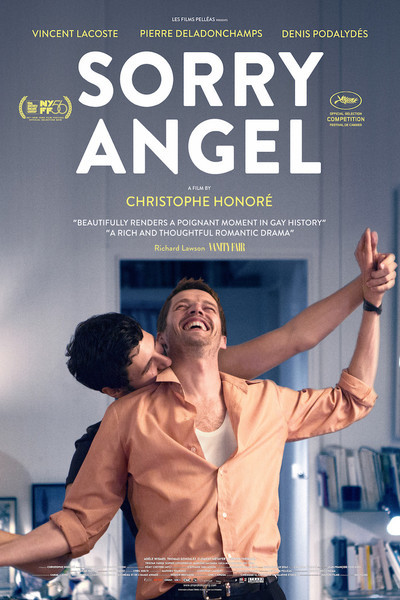