Alexis Gambis' “Son of Monarchs” won the Alfred P. Sloan Prize at the 2021 Sundance Film Festival, a unique distinction that goes to one film that “focuses on science or technology as a theme, or depicts a scientist, engineer, or mathematician as a major character.” (“Searching” was a previous winner). There’s a special power in this storytelling ambition, in exploring science with emotion, but it also can be tricky. “Son of Monarchs,” which is driven by mood as much as it is a metaphor that it can’t get enough of, embodies the equal ambition and shortcomings of a writer/director trying feel their way through science, while having as minimal a narrative as possible.

Tenoch Huerta proves his strong on-screen silence as Mendel, a contemplative, hard-working scientist who studies the color of butterfly wings. His job is central to what the movie is doing—thinking about butterflies, wondering what it would be like if human beings could also fly, using butterflies to help make sense of its emotions. Everything is a metaphor here, connected to butterflies. The ideas can be powerful, but at some point it's almost like the film is trying to prove how much mileage it can get out of an idea that other movies would use as a meaningful character trait.

If you squint you can see a more typical narrative foundation in this story, of a man who returns to his original home of Michoacán in Mexico (to mourn his grandmother, recently deceased). Mendel faces the different pieces and people from his past life, and then reflects on it when he’s at home. These dynamics are expressed quietly, but they set up enough of a sense of his family—a wedding for his niece that he should, but many not attend—and friends, like Vicente (Gabino Rodríguez), who leads his own type of primal grieving ceremony, in which everyone wears animals masks and howl at the moon. The most strained relationship involves his older brother Símon (Noé Hernandez); they have great deal of emotional distance between them, especially after Mendel left Michoacán and essentially their shared trauma related to the loss of their parents.

"Son of Monarchs" uses the science of butterflies for numerous significances, including that of migration, ancestry, and that of camouflage. With a cut to black and loud whoosh of subway cars, Gambis' film takes us away from Mexico and back to a life in a concrete jungle that makes Mendel feel all the more lonely, which we understand most of all Huerta's performance. Mendel peers through a microscope, modifying the color using controversial new CRISPR technology, which itself creates more opportunity for the movie to feature monologues about science while dampening the emotions. He begins a relationship with an immigration lawyer and amateur trapeze artist (Alexia Rasmussen), watches his friend Pablo (Juan Ugarte) advance in the field, and returns day after day to the lab. Gambis cuts in between to memories—either as a child learning about the wonder of butterflies from his grandmother, or learning about death and science from his brother Simon—like lyric passages that have been cut from a book and strewn about.

There's an imbalance here of atmosphere and story that holds the film back from casting as large a spell as it desires. Some narrative pieces are too understated—even for its overall delicate swirl of emotions—as when Mendel disappears from the people in his life, an emotional passage that does not have the proper lead-up or impact. At the same time there’s one too many dream sequences, moods and metaphors, that the story clutters the direct connection it’s making from human to animal. It’s almost like the movie is better when its narrative and scientific ideas exist apart from each other, instead of being used to explain the other’s presence. There are numerous involving story components here, about Mendel coming home, and facing relationships with those he is closest to, that do not demand a poet’s scientific eye.

Mendel’s relationship with his older brother Símon makes for a handful of weighty, effective scenes, whether it’s when they are kids (Símon’s morbidity at a young age) or as adults. Huerta and Noé Hernández, have excellent tension that reaches a boiling point, naturally and painfully. The scene is extremely well done, with editing that allows us to see how each of them processes the heartbreaking statement they've just heard from the other. This is the type of scene that gives "Son of Monarchs" a pulse, and shows off its promising artistry. It does not seem like a coincidence that this scene also has nothing to do with butterflies. 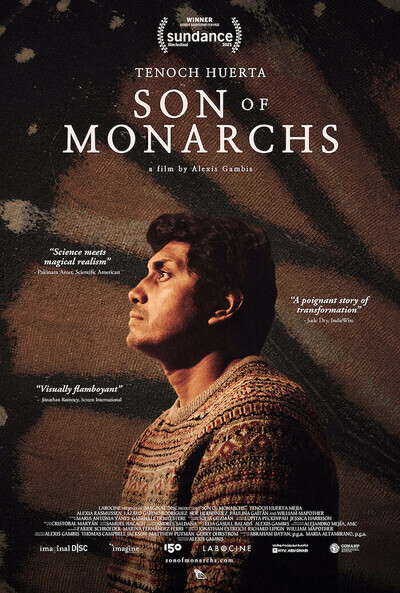