The story of theater and film artist Eugène Green sounds like that of a character made up by Umberto Eco or Gilbert Adair. Born in New York in the late 1940s, he decamped to Paris while still a young man. Once settled in Europe, he made his life work the revival of the traditions of Baroque French theater, particularly a declamatory style of direct address. He’s mounted many plays, published many books. He has been compared to the conductor Nikolaus von Harnoncourt, a pioneer in the “original instruments” movement of playing classical music. But his pursuit and championing of baroque modes does not end at traditional forms. He has been making films since the turn of the century, many of them parables that extol old-world values in modern settings.

His new picture “Son of Joseph,” opens with credits on white type against a black background, some stirring Baroque choral music, and shots of schoolkids’ feet as they leave their building. A title card announces the movie’s first chapter, “The Sacrifice of Abraham.” In a basement, a couple of teen boys—they were among the schoolkids, we infer—have trapped a rat, and they’re holding it in a cage, prodding it with rods and saying mean things to it. (This is the most unpleasant imagery in the whole movie and press materials insist the rat was unharmed and has retired from acting.) One of them asks “Where’s Vincent?” We next see the kid who opted not to partake in rat torture. He is Vincent, surly, fresh-faced, tormented. He shoplifts a screwdriver from a hardware store, and immediately brings it back. He has a tortured relationship with truth. After he snoops into his mother’s desk to find correspondence that reveals the identity of his father, who’s been absent his whole life, he readily admits to his mother that he did it. She slaps him and he takes it. But he then crashes a party hosted by his father, the top editor at a major publishing house, and tells a ditzy literary critic in attendance that he’s that editor’s latest enfant terrible find. What does Vincent want?

Well, he wants a family. On encountering a happy male/female couple sitting at a café, he glowers at them; the camera tilts up to show the name of the café is “Pere et Fils.” One of his rat-torturing buddies offers him a business proposition. “I sell sperm on the Internet,” pal Dean tells Vincent. “Who’s your supplier?” Vincent asks. “I am,” says Dean, sighing. “But supplies are limited.” Almost all the signifiers in the early part of the picture are about parenting, reproduction. And, of course, the unusual nature of what it is to be related to someone, either by blood or humanity. The circumstances mess with the super-serious Vincent to the extent that they compel him to invade the sparsely-furnished hotel suite that serves as his wayward father’s office. There, he role-reverses the sacrifice of Abraham by handcuffing his father to his chair and holding a blade to his throat. At which point he is met with a vision.

Did I mention this movie is a comedy? It is, and a very sure-footed one, although the style does take some getting used to. Between the meticulously composed framing— sometimes breaking down bodies to their component parts, sometimes privileging the talking head—and the clear, deadpan delivery of the dialogue, one might be tempted to say that Green accomplishes the not-as-unlikely-as-it-sounds fusion of Bresson and Kaurismaki. But this would be inaccurate, because “Son of Joseph” doesn’t actually feel like a fusion or pastiche. Green is on to his own thing, and while it takes some getting used to, it ultimately provides big rewards both in entertainment (I found it reliably warm and funny) and Stuff with a Capital S (its adaptation and elaboration of Biblical themes posits some worthwhile moral propositions).

Green’s magnificent cast is another big plus. Young Victor Ezenfis, as Vincent, can go from irritating to endearing without actually seeming to change a thing about his bearing. The great Natacha Régnier is a warm and credible mother Marie. The very great Mathieu Amalric reins in his bug-eyed madness but still registers strongly as the arrogant but harebrained book man Oscar Pormenor. Maria de Medeiros is hilarious as a daintily pretentious literary critic. And Fabrizio Rongione, the Belgian actor who’s a veteran of the work of the Dardenne brothers (who co-produced this film) and starred in Green’s last film, “La Sapienza,” is almost as beatific as Regnier in the role of Joseph, the man Vincent chooses to be his new dad. I won’t spoil the ending—although you can probably guess some of it—but it’s as enigmatic and strangely satisfying as many of this unique film's best scenes. 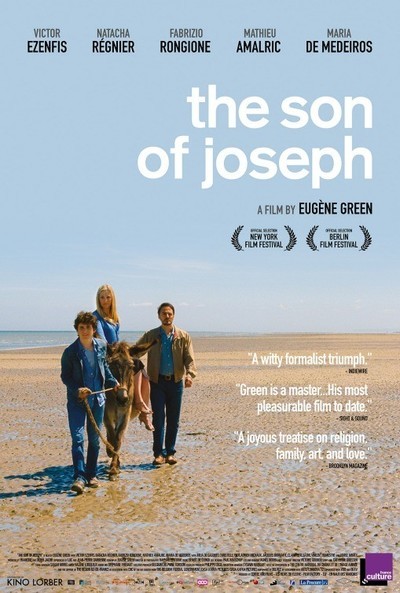