Directors do make a difference. That seems a self-evident truth, but it’s sometimes interesting (or, if you want to be pedantic about it, instructive) to see that truth played out. Working with the director Michael Winterbottom, screenwriter Frank Cottrell Boyce has been a part of some almost classic (and, I think in the case of 2000’s “The Claim,” verifiably classic) pictures, “24 Hour Party People” and “Code 42” among them. Working with Danny Boyle he crafted the almost-crowd-pleaser “Millions.” Now, with Carl Hunter (who produced a prior Boyce script, 2007’s “Grow Your Own”), his words yield a sometimes wobbly, sometimes engaging, always well-acted tale of family estrangement and reconciliation.

Bill Nighy is the first of the excellent cast to make an appearance, standing alone on a beach, talking into a phone. His Alan is a tetchy but garrulous gent, yammering on to the guy who runs the beach ice cream truck about his son, who as it happens works as a painter of such vehicles. Peter (Sam Riley), said son, is a little ill at ease at about the father and son reunion, particularly as he had envisioned it as an afternoon outing, while Alan has booked them at a retro B&B that, yes—like several visuals that occur and recur in this picture—looks maybe like something out of a Wes Anderson movie.

At their lodgings, they meet a couple, played by Tim McInnerny and the always welcome Jenny Agutter. Someone mentions jazz and Alan says “I used to say the only good thing about jazz is that it scores high on Scrabble.” One member of the couple says that it sure does not, as there’s only one “z” (or here, because we’re in England, “zed”) tile in a Scrabble array. Good point. Alan then proceeds to hustle McInnerny’s Arthur out of 200 pounds at the game.

What’s this got to do with family estrangement and such? Well. Single dad Alan raised Peter and another son at a kind of emotional remove, not to mention cheaply. (During one of his tangles with Alan, Peter complains of his always buying the boys off-brand toys at holidays.) And he raised them to be killer Scrabble players, to the extent that during an argument over the game, the now-absent son walked out of the family, never to be seen again. Is he at the morgue near the B&B, or is he a fierce online player who Alan can’t seem to track down in the flesh?

The answer to this question becomes secondary after Alan settles in for a spell at Peter’s house, much to the annoyance of Peter’s wife but to the eventual delight, sort of, of Peter’s son, to whom Alan (perhaps inadvertently) Imparts Lessons.

Nighy is, of course, exceptional in fleshing out what could have been merely a set of irascible tics and traits. And the Andersonisms, while not particularly exhilarating, are not thematically inapt. But this is a film best consumed by those who don’t mind “slight.” 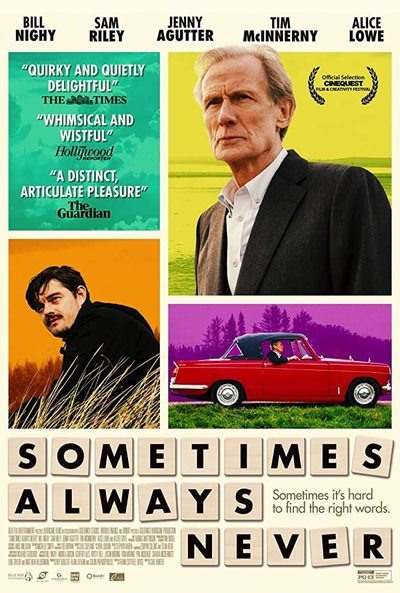