In "The X-Files," the poster on Fox Mulder's wall declares "THE TRUTH IS OUT THERE". The truth is "out there," it can't be grasped. The conspiracy involved in covering it up would be massive. "The X-Files" is one of the most paranoid television series ever made, and "Something in the Dirt," a film written, directed, produced, and edited (as well as starring) Justin Benson and Aaron Moorhead, gives "X-Files" a run for its money. Paranoia is a magnet, drawing to it more and more flotsam and jetsam, accumulating "random" coincidences pointing to hidden patterns, and all of this swirls into a black hole swallowing up lucidity and discernment as well as reality. Paranoia is irresistible! "Something in the Dirt" has the gritty DIY vibe of the no-budget world from which it sprang, and is both thought-provoking and crazy-making, just like the mood it presents.

Two men—one more burnt out than the other, although both are struggling—find themselves neighbors in a low-rent apartment building in Laurel Canyon. There seem to be no other tenants. An apocalyptic mood hovers over the landscape: low-flying helicopters, plumes of smoke in the hills, coyotes roaming the streets. John (Aaron Moorhead) is a gay evangelical Christian, recently divorced, and good at math, although he doesn't appear to have a job. Levi (Justin Benson) is a bar-back with a sketchy criminal record and no family or friends. He's on the Sex Offender Registry, but he has a really good story about why he's not supposed to be on there. They meet, at random, in the courtyard. Levi just moved into an apartment that's been vacant for as long as John can remember. John sits there, with what looks like blood splatters on his shirt. This is not acknowledged.

Almost instantly, weird things start happening in Levi's apartment. Mathematical equations cover the walls and door jambs, presumably scribbled by the former tenant. A quartz crystal object levitates on its own, emitting prisms of light. There's a closet emanating some kind of electromagnetic radiance and/or low gravity conditions. Things float around. A random plant sprouts a horrifying slimy little fruit that looks like it might shout "Feed me, Seymour" at any moment. Levi and John have been friends for all of ten minutes when they get sucked into trying to figure out what is going on. They decide to document their experiences, and maybe it could be a documentary and they can win awards and make money.

"You go your whole life thinking certain things will always be a mystery," Levi says. But what if there's some logical explanation, and he and John can figure it out? This leads them down an infinite number of intersecting garden paths involving the Golden Ratio, MK-Ultra (of course), the "Jerusalem Syndrome," Aldous Huxley, Morse code, a manuscript with every line redacted except for five numbers, Pythagoras, and the bizarre history of Los Angeles city planning. None of this makes even a remote bit of sense, although the connections discovered are eerie and woo-woo in the extreme. At first, I tried to keep up with each tiny bit of information and "proof" piling up in the quartz-encrusted corners, but I finally gave up. But there is a kind of mad sense to it all (if you don't try to slow down and think things through). The conspiracies don't add up (they never do), and there may be a letdown in how it all plays out (or doesn't play out, depending).

What works is this intimacy between John and Levi, there from the jump. They share cigarettes, swap ideas, and get inspired. It's fun to watch them think out loud to each other. Darker things come into play as the investigation grows more intense. John lords it over Levi, considering himself intellectually superior. Levi gets irritated. This could go south pretty quickly. "Experts" are pulled in to comment on the events unfolding, experts presumably "hired" by John and Levi for the "talking heads" part of their planned documentary. It gets even more "meta" when they include interviews with two of the documentary's editors (one is cloaked in anonymity, with his name redacted). A mish-mash of styles is at work here, although the majority of the film takes place in that creepy apartment, with John and Levi wandering around, watching strange phenomena occurring, and glancing at each other with widened shocked eyes. They're together in their sense of awe and wonder.

“Something in the Dirt" ends with a dedication I found unexpectedly touching: "To making movies with your friends." That's what you sense onscreen. 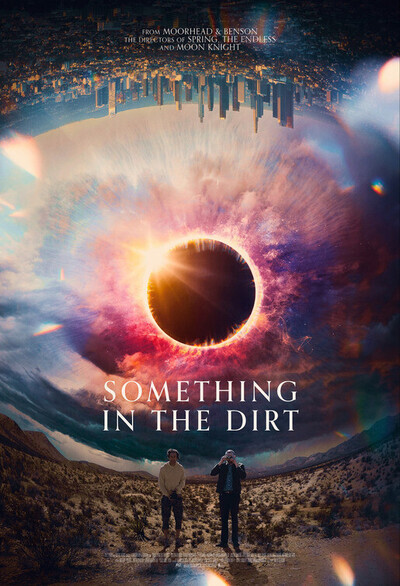