It sure would be nice if a filmmaker could actually come up with a consistently good hard-boiled vehicle for John Hawkes. Hawkes is a whippet-thin man with dark hair that sometime flops over his forehead, the better to frame a hawk-like nose. Not a bulky tough guy, more like a strong but flexible short-end of wire. His natural screen presence is more than complemented by his acting chops, which are briefly but revealingly on display in the current awards-season favorite “Three Billboards Outside Ebbing, Missouri,” in which he plays the ex-husband of Frances McDormand’s miserablist avenger mom, a physically abusive creep who, unlike most such sorts in real life, can deliver some real verbal zingers with minimal prompting. Hawkes makes this implausible character not only credible but also strangely ingratiating.

In the tricksy but not wholly successful 2016 post-noir thriller “Too Late,” Hawkes played a detective whose tragedy was revealed in a series of five unbroken long takes, each one taking place in a discrete block of time, and these blocks were not presented in chronological order. Like I said, tricksy, but sometimes compelling, because Hawkes himself is compelling. In “Small Town Crime,” the tragedy of his character Mike Kendall is spelled out right away, courtesy of an old Animals’ tune and the sight of his souped-up, matte-black Chevy Nova hotrod parked on the lawn of his house, the fence of which is down. Ignominiously fired ex-police officer Kendall is a raging alcoholic prone to blackouts and jaw-droppingly nonchalant about driving drunk. “You wrap your car around a tree, I’m not gonna feel guilty!” his best friend and brother-in-law Teddy (Anthony Anderson) shouts after they both get thrown out of their favorite bar. “Neither am I!” Mike gleefully responds. The next morning, having driven into an off-road field, Mike is disturbed by the sight of a brutally beat-up body. He drives the still-alive young woman to a hospital, and is given a good talking to by a couple of ex-colleague detectives. Mike’s still hoping to get on the force, and these guys don’t think so. When the young woman dies, Mike sees a shot at redemption and invents a new identity for himself as a private detective.

Tooling around in a cheap black suit and putting out a line of poorly improvised patter, Mike nonetheless earns the trust of the victim’s grandfather, who’s still bitter about all the heartache she caused her family—at time of death she was a drug-addicted prostitute—but game to get some payback, no doubt in part because he’s played by Robert Forster and characters played by Robert Forster tend to have these attitudes. Soon Mike is playing cat and mouse with an eccentric pimp named Mood (Clifton Collins, Jr., having some outlandish fun), a bar keep who’s turned his establishment into a brothel, and other unsavory characters, while enduring the loving disapprobation of his adoptive sister (Octavia Spencer), who’s married to Teddy.

Written and directed by the brother team of Eshom and Ian Nelms, “Small Town Crime” sounds like the kind of movie at least one other brother team could conceivably make, and also like a potentially fun picture. I wish it had been a lot more fun, frankly. The movie’s tone never quite gels; it’s too outlandish and cartoony to convince, but not so outlandish and cartoony that it takes off into a realm of over-the-top exhilaration. The score, by Chris Westlake, sounds rather like a tribute to Stephen J. Cannell, and there are times when you feel the filmmakers trying to wed Cannell’s unabashed cheesiness with a sardonicism that isn’t quite as cerebral as that of the Coen Brothers’. The grisly killings are a little too pleased with their mercilessness, too. "Small Town Crime" is brisk enough that it’s not torture to roll with its inconsistencies and feckless creative decisions, but Hawkes is the only thing that really holds it together. He deserves better. 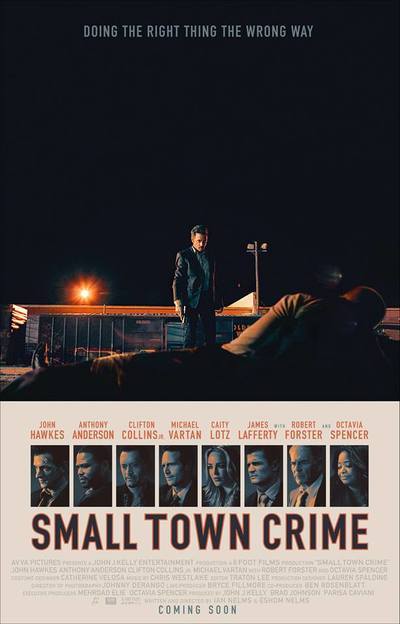