Slut in a Good Way

Countless books, gender studies papers and personal essays have pored over the meaning of the term slut for as long as there has been feminism. Yet, no matter how far we think our culture has progressed, the gendered term is still one that women—like the teenagers at the heart of Sophie Lorain’s righteously funny “Slut in a Good Way”—have to face. Ditching many of the high school movie tropes for idiosyncratic raunchy comedy, Lorain’s film deliberately calls out the double standard that still exists while letting her flawed young characters still have fun.

After the devastating break-up of her first major relationship, Charlotte (Marguerite Bouchard), and her two best friends, the outspoken anarchist-spirited Mégane (Romane Denis) and the soft-spoken Aube (Rose Adam), drunkenly wander into a store and apply for low-level retail jobs at a toy store. Thanks to the impending holiday rush, the trio find themselves hired and in the company of many cute eligible young men.

From there, “Slut in a Good Way” becomes an absorbing dramedy about friends, gossip, feelings, and sex. It’s alarming how much of these youthful mistakes and arguments are either painfully relatable or still relevant to the petty one-upmanship among adults. The three girls stumble through crushes, bad sex, blurred lines between friends and sexual partners, and the mortifying situation of taking a Halloween costume party too seriously. As much as the guys talk behind the girls’ backs, the movie shows that girls are just as guilty in calling each other sluts to put others down. When problems mount between the two sides, the girls start a sex strike as a fundraiser like “Lysistrata” by way of “Clerks.”. The film’s sharp critique of double standards never feels like sermonizing, the teenagers’ observations about their situations feel organic, like stray musings traded over smuggled booze in the park.

Screenwriter Catherine Léger gives so much life to these characters in the movie’s short runtime. Mégane holds the group’s chaotic energy, declaring all vestiges of the patriarchy unfair and challenging them in a serious but playful manner. Aube, the tall, quiet one in the group, embodies almost every insecurity we may have ever felt about our bodies and whether or not our crush will ever notice us. While Charlotte talks a big game, she and her friends still have a lot to learn about love and life. Bouchard, Adam and Denis’ naturalistic performances bring these lively characters off the page in a way that’s effortlessly charming.

Charlotte’s fun-loving spirit extends to the visual style of “Slut in a Good Way.” Cinematographer Alexis Durand-Brault shot the movie with soft-focus and in black-and-white, and it feels both modern yet romantic. It’s in greyscale rather than in crisp black-and-white so that even the colors on the screen are quite clear about the relationship boundaries.

And there’s a lot of visual humor in the way the film captures this awkward in-between stage of life. The characters engage in grown-up behavior while working among kid’s toys, a visual metaphor for the teenage years. Certain scenes play up conventions of romantic comedies, like when Charlotte has real feelings for one of her coworkers. Other moments poke fun at the animalistic aspects of our mating rituals, like the crude flirting techniques of picking on the person you have a crush on or when the boys gather to ogle the new girls on their tour through the store.

The soundtrack is just as energetic and eclectic as can be, moving from pop songs to Bollywood-inspired tracks. Why it’s the music choice for a story of three white French Canadian teens I’m not sure, but it does lead up to one of the cutest credits dance scenes in recent memory. Another interesting musical choice is Charlotte’s fascination with Maria Callas, whose version of “Habanera” from Bizet’s “Carmen” is the soundtrack to one of the film’s spectacular moments of editing from Louis-Philippe Rathé.

“Slut in a Good Way” is fun in a great way, the kind of movie that leaves you on an upbeat note and with a smile. Lorain’s direction feels so free-flowing, Durand-Brault’s cinematography so dreamy, Léger’s characters so wonderfully rendered by the film’s young cast, that the overall result is too delightful just to watch once. 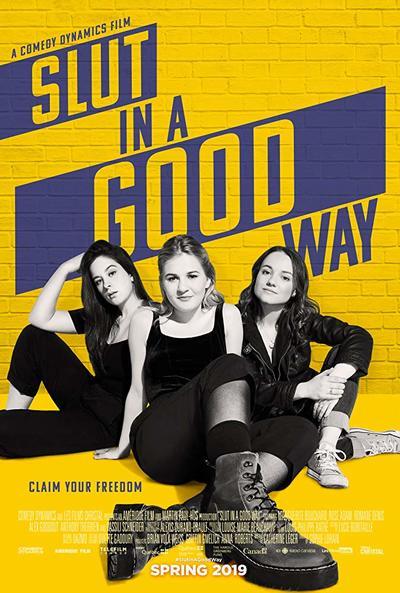