“Slums of Beverly Hills” was born to inspire a sitcom, and probably a pretty good one, too. It's about a poor Jewish family who moves by night from one sleazy apartment to another, jumping the rent but always staying within Beverly Hills to take advantage of the educational system. Every move brings them into range of a fresh supply of wacky supporting characters.

The story is told through the eyes of Vivian (Natasha Lyonne), who will be a freshman in the fall and is alarmed that her breasts have, in the words of her father, “sprouted overnight.” Also sprouting is her sexual curiosity, which is enthusiastically encouraged by Eliot (Kevin Corrigan), the kid who lives across the hall of the latest pastel flea trap they've moved into. “I dropped out of school because I wanted to join the work force,” he tells her. “Doing what?” “Selling pot.” Dad is Murray Abramovitz, a 65-year-old car salesman played by Alan Arkin as a man who seems to believe that if he had to have kids when he was 50, he deserves everything he got. There are two boys in the family: Vivian's older brother Ben (David Krumholtz) and younger brother Rickey (Eli Marienthal), and they're all accustomed to being awakened at 3 in the morning and told to pack their stuff because the rent is due and, besides, Murray has found a “much nicer place that doesn't rob you blind.” Vivian thinks she hates her breasts. Her dad is always shouting at her to wear a bra, and the movie's best single shot is possibly the expression on her face when, under his orders, she puts on a bra under a skimpy halter top, creating a result more kinky than modest. “You've been blessed,” the saleslady at the bra counter tells her. “Breasts are wonderful. You'll see.” She doesn't. But then life changes radically for the Abramovitzes when Rita (Marisa Tomei), the troubled daughter of Murray's rich brother, comes to stay with them. She's just gone over the wall of a rehab center, she's pregnant, and she enlists Vivian to help her deal with the rat who got her pregnant--an actor who does “Man of La Mancha” as a one-man show.

You can see the sitcom possibilities. The film, written and directed by Tamara Jenkins, is pitched pretty firmly at that level of ambition: Broadly drawn characters, quick one-liners, squabbling family members, lots of sex. Yet it also has a certain sweetness, a good-hearted feeling for this family, which stays together and plugs away.

Arkin is the key to the good feelings. He is a poor provider but a good father, who may skip out on the rent and be a lousy car salesman, but he insists that his kids do their homework. One senses that his kids will grow up to be all right. Then there's his rich brother Mickey (Carl Reiner), who starts paying the rent in return for Murray taking his troublesome daughter off his hands. Mickey makes lots of money but has no class, and there's a painful scene in an airport restaurant where he blurts out crass insults and Murray--who has been taking his handouts all his life--decides he's had enough.

Lyonne has the film's most important role, and is the key to the comedy. She does a good job of looking incredulous, and there's a lot in her life to be incredulous about. She also has a nice pragmatic approach to sexuality, as in a scene where she consults a plastic surgeon about on-the-spot breast reduction.

There are a couple of scenes that simply don't work, and the worst involves some tentative fooling around between Murray and Rita. I didn't believe it, I didn't like the way it played, and I think it should have been cut from the movie. It spoils the tone and introduces material that has no place in a story like this. The movie also grinds to a halt when Murray calls a black waiter “Jackson.” Not funny, and not likely. But basically I enjoyed “Slums of Beverly Hills”--for the wisecracking, for the family squabbles, for the notion of squatters who stake a claim in a Beverly Hills where money, after all, is not the only currency. 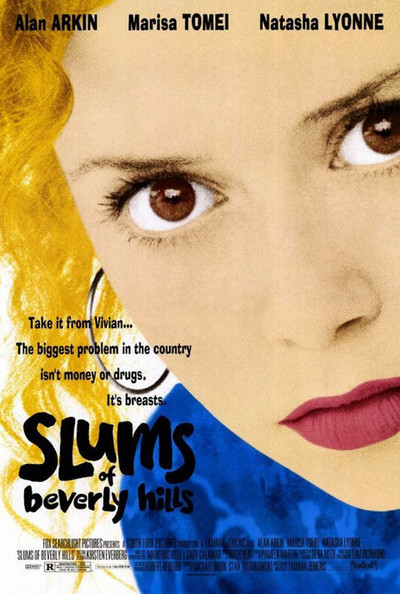