No fairy tale prince ever took on a more terrifying monster than the "dragon" in this documentary about the massive Republican redistricting following Barack Obama's first Presidential election and the 2010 census. The dragon here refers to the anything-but-square, lizard-like shapes of the new districts, the lines drawn to make sure that even if the majority of voters support Democrats, the district-by-district returns will elect Republicans. The post-2008 re-aligning of voters to push through a conservative wish-list by focusing on state legislators and Congressional elections is the subject of "Slay the Dragon," a new documentary from Chris Durrance and Barak Goodman. One amusing sequence scrolls through maps, identifying the districts' wildly circuitous lines by the images they resemble, from "Goofy and Donald" to hanging bats, a praying mantis, and an octopus.

Durrance and Goodman make it clear that this tactic has been used to distort the popular vote by Democrats as well, though the Democratic sweep in 2008 took the Republican ferocity about stopping Democrats to a new level. There's a grim recognition that they can't win based on persuading voters they have better policies; they go straight to thwarting their votes. (The film barely touches on another key factor, the Supreme Court's Citizen United decision, allowing unlimited amounts of undisclosed corporate and billionaire dark money campaign contributions and lobbying expenditures.)

The term gerrymander dates back to 1812, when Massachusetts Governor Elbridge Gerry redrew district lines to win more state senate election districts for what was then called the Democratic-Republican party. The term combines Gerry's name with the animal that the new district lines resembled—a salamander. Districts are redrawn after the census is taken every decade. When the majority of voters are opposed to your policies, it is easier to tilt the playing field through redistricting and voter suppression than to change their minds. The Republican consultant behind it all, Chris Janowski, founder of Project REDMAP (Redistricting Majority Project) is not just unapologetic; he is downright proud. He wants to assure us he's not racist, though. He says he is not trying to disenfranchise African-Americans; just Democrats. The officials are not hiding their motives, either. In an email recovered in a legal challenge, one of the people overseeing the new district lines explains that his goal is to "quarantine" as many Democratic votes as possible. Sounds undemocratic? Maybe unconstitutional? Well, not if you ask the Supreme Court, with the deciding votes cast by Trump appointees Gorsuch and Kavanaugh.

The Constitutional plan was to use the new data about the population to promote democracy by making districts more accurately reflect the population. But the problem with having people in power make those decisions is what economists call a moral hazard. It is just so easy to make the determination based on what they see as best for them instead of what is best for the districts, the country, democracy, or justice. And buying state and local elections are not just cheaper than federal elections; they provide more bang for the buck. All of a sudden there was money for consultants and television ads in races that had never been able to afford them before. A commenter in the film calls it "the biggest bargain and perhaps the biggest heist in modern American history."

And that, infuriatingly documented in this film, is what happened. Conservatives, fearing after the 2008 election that they could no longer win over voters in a demographically shifting electorate, decided to tilt the playing field so that even a majority of Democratic votes could not defeat Republican candidates. In one example, more people voted for the Democratic candidates for state office, but Republicans won 60 percent of the seats.

The film draws a direct (red) line between the redistricting and specific outcomes that have ranged from contrary to public opinion to catastrophic. As we learned in Michael Moore's documentary "Fahrenheit 11/9" and other examinations of the switch to a toxic water source for Flint, Michigan, "the crisis started with lines drawn on a map." Michigan Governor Rick Snyder bypassed the city government in Flint by declaring a fiscal emergency and appointing a financial manager with no oversight or accountability. The citizens voted to repeal the appointment and the post-redistricting legislature re-passed it with no repeal allowed. The financial manager switched to a new water source in 2014, which turned out to be contaminated, devastating the physical and economic health of the already-depressed town.

Even more toxic was the loss of faith in government, not just the elected officials but in the entire idea of democracy. But where there is a dragon, there is a slayer, and in a development no one would believe if it happened in a feature film, the slayer who takes on the challenge is a young woman whose only weapons are social media and determination. Independent voter and recent college graduate Katie Fahey invited those concerned about gerrymandering to join her in a campaign to set up a more transparent, independent system for drawing district lines. The film's most gripping scenes show her efforts to create an all-volunteer grassroots campaign that includes collecting 350,000 petition signatures and a brutal court battle.

Goodman and Durrance have made a dense, numbers-driven subject very accessible and they expertly balance the overwhelming bleakness and cynicism of the voter suppression effort with the integrity of those who are fighting it. They hold our attention with skillful use of animation and other visuals, touches of wry humor, and brisk pacing, but it is the heroine at the heart of the film who gives us hope and perhaps inspiration to try some town halls, petitions, and lawsuits of our own to protect the voting rights that are essential for a just and trustworthy government. 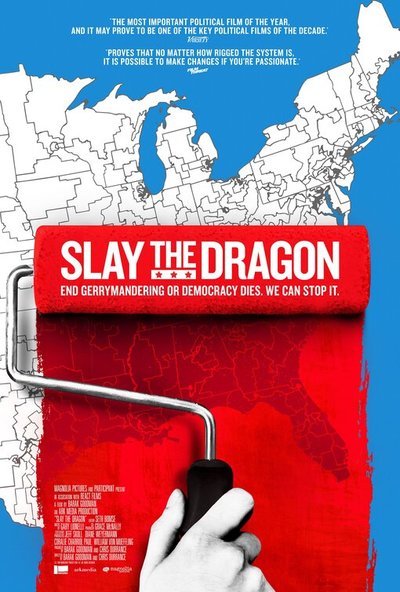