Neat towers of color-coordinated garments. Roomy rows of everyday apparel tidily dangling on hangers. Bright lights. Shiny surfaces. Welcome to Canadian Cotton Company, an offshoot of an Everlane or Uniqlo-type store (or American Apparel, if you want to get nostalgic) in which Elza Kephart’s fun, gory yet undercooked killer jeans thriller-comedy “Slaxx” takes place almost entirely. The fictional CCC looks like an alarmingly cheerful place—think of your average Apple store, but for clothes—so state-of-the-art phony in its feel that you wonder why all the employees aren’t spontaneously launching into “The Happy Worker” song from “Toys” all the time.

You can tell the ecstatic fresh hire Libby McClean (Romane Denis, perfectly cast as a disarmingly wide-eyed new employee) would sing it all day long if she could. It appears being a part of the CCC Family is a dream-come-true for the young woman. Still visibly drunk on her good fortune of actually being in one of these sterile stores under the wings of the fake, cringe-inducing slogan, “Make A Better Tomorrow Today,” Libby doesn’t even wince when she's asked to drop a couple of hundred bucks for a brand-new outfit on her first day, and with no employee discount, after being told that all staff members are required to wear in-house merchandise while on the job. (For the record, she is already donned in a CCC ensemble, of course she is. But those pieces are apparently so last season ... meaning, from a mere couple of months ago.)

Indeed, this is the manipulative world of fast fashion—no matter how sustainable and responsible CCC claims to be with their bogus image and sham brand promise to never use GMOs or to exploit overseas workers, the company routinely supplies their materials from locations like India that employ and overwork children. The film opens in an idyllic cotton field, growing the crops for CCC’s next super-secret line: comfortable, gender-inclusive denim trousers that fit like a glove by automatically adapting to everyone’s unique body shapes. It is on the eve of this collection’s launch and preceding lockdown that an unsuspecting Libby joins the corporation’s lowly, hourly-paid ranks. The eerily polite, duty-minded store manager Craig (Brett Donahue) is quick to condescend her. Thankfully there's at least the no-nonsense Shruti (Sehar Bhojani) around—she isn’t exactly the friendly kind, but she could still be a potential ally to the rookie Libby just by virtue of being so over the CCC BS. Shruti’s difference in attitude is especially pronounced and hilarious when the corporation’s big boss shows up at the store on the important night, delivering a customary “we are a family” speech, before the evil pants strike.

Frankly, the jeans and lockdown pairing in “Slaxx” feels like a sick joke at first—anyone who’s spent the quarantine in cozy, elastic-waist sweatpants and has been dreading the day of squeezing into skintight denim once again will feel the sting when the mass produced jeans start attacking people one by one, shredding them to pieces and sucking their blood. But rest assured, they won’t hurt you nearly as much as they hurt those on the screen. No one will be spared from the chaotic massacre—not a haughty sales associate, not an affable cashier, and certainly not the annoying, internet-famous influencer Peyton Jules (Erica Anderson). Along with her design team, Kephart certainly has her fun with rearranging all the victims’ limbs drenched in generous amounts of thick red goo.

Underneath all the mayhem is a humanitarian message that co-writers Kephart and Patricia Gomez dutifully deliver without deepening its significance—in the aftermath, you might crave a bit more substance than the film’s thin 77-minute running time is prepared to offer. In that regard (and without spoiling the nature of these killer jeans), themes like excessive consumption, corporate exploitation, and worker rights get teased but not necessarily interrogated. Then again, “Slaxx” isn’t that kind of a serious film. What it also isn’t is Peter Strickland’s highly stylized killer dress flick “In Fabric.” Here, the effects are purposely on the cheap (they will make you giggle) and the acting is deliberately over the top. Once you accept these quirks, there's some blood-spattered pleasure to be had with “Slaxx” and its amusing twist on a survive-the-night slasher. 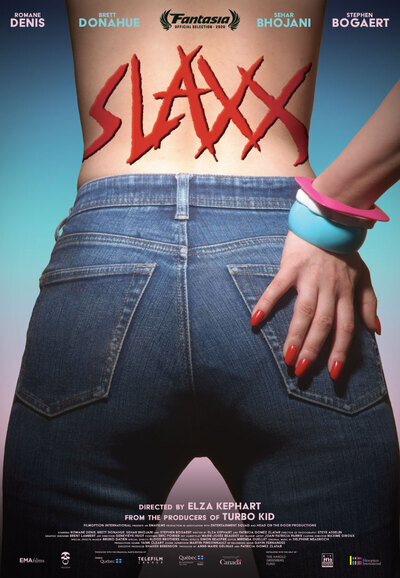