Perhaps the most disquieting aspect of “Slalom,” a heartbreaking tale of awful sexual exploitation that contains numerous tough-to-watch scenes, is how predictably its story plays out between a vulnerable and impressionable young girl and an abusive someone in a position of power that she looks up to. But its foreseeable nature makes it neither unimportant nor hollow. On the contrary—by telling a story we’ve all heard a million times before (and perhaps even experienced first-hand to some degree) plainly and bravely, Charlène Favier reaches something urgent and devastating with her feature debut, sensitively written by Favier and Marie Talon.

When we first meet Favier’s central character, the 15-year-old Lyz (Noée Abita), she is rigorously training in the cold, stomping the ground in rapid steps that simulate the motions of skiing. In the backdrop are the majestic, snow-clad French Alps she can’t help but glance at longingly, even when her coach curtly asks the ambitious rookie to step aside and not be in everyone’s way. In these tone-setting opening moments of her powerful, meticulously calibrated film—and many other similarly intricate scenes that follow—the filmmaker stays close to Lyz’s receptive face, as well as her magnificently deep and wide eyes that still linger in a territory of childlike innocence, capturing her insatiable desire to make it to the top and to be seen for who she is in the process.

In that regard, “Slalom” rhymes with the likes of Andrea Arnold’s “Fish Tank” and Joyce Chopra’s “Smooth Talk,” in telling an age-old story of youthful mental and emotional hunger, sadly susceptible to abuse in the manipulative hands of grown-ups. In the case of the talented loner Lyz, whose life lacks sufficient adult guidance with an absent father and a caring but self-centered mother, Catherine (Muriel Combeau), that predator ends up being no other than her overpowering ski coach Fred (Jérémie Renier). At first hard on the inexperienced high-schooler in the exclusive ski club famous to raise leading professional athletes of the country, Fred changes his tune in time, designating Lyz as his new star trainee, buttering her up with confidence-boosting compliments and motivational pats on the back.

Well, they are at least supposed to be motivational, but audiences will be quick at picking up on his subtly inappropriate physical contacts and longer-than-necessary, domineering glances towards Lyz. There is also all the constant, carefully planned grooming that confirms our most demoralizing suspicions about Fred—improper talks about the beauty of Lyz’s menstrual cycle, constant praises to heighten her sense of pride, and so on. So when the unspeakable sexual abuse scenes arrive, filmed with a sense of toughness and unforgiving veracity—sometimes just a little too close to exploitation themselves—you will recognize that you’ve been cringing all along, hoping to somehow avoid seeing the inevitable. And you will also realize that you’ve been several steps ahead of the young girl, who can only respond to the atrocity thrown her way in utter shock. Lyz’s silently emerging perception mixed with a side of stubborn denial is all too damning to witness: while she was busy feeling a crushing disappointment towards her mother who starts a new job away and a new romance to boot and winning her competitions one by one, Fred has been sinking his claws deep into her somewhere behind the scenes.

Delivering an unforgettable breakthrough performance, Abita is phenomenal in pitching Lyz on the slippery slope between an adult wannabe and a little kid, boldly wearing even the smallest nuances of her character’s rapidly shifting emotional world on her resolute face. The young performer is similarly impressive in her difficult abuse scenes with Renier, transposing Lyz’s out-of-body state on to the screen with bone-chilling depth. A regular of the Dardenne Brothers’ world of realism, Renier deserves no less credit for portraying a textbook predator with startling accuracy. Both actors sell their excruciating dynamic extremely well—it’s thanks to them that “Slalom” often feels like a psychological thriller in following Lyz’s downfall and suffocating fight to get back up.

What also contributes to the spine-tingling sensation of “Slalom” is Favier’s kinetic, almost magical fervor behind the camera. This is especially evident with the high-speed ski scenes, cleanly choreographed and lensed by someone with a deep knowledge and appreciation of the sport and the isolating psyche of competitive athletes yearning to perfect it. But beyond the fairy tale-worthy cliffs and powdery summits of the French Alps, what Favier really captures is an all-too-common female coming-of-age tragedy with an insider’s clarity. And she doesn’t stop there, somehow managing to wholly build two additional female characters in supporting roles. In due course, she allows Catherine the time and space to grow in her role as a single mother. She also gifts Fred’s increasingly suspicious wife Lilou (Marie Denarnaud) a compelling storyline as she both confronts and genuinely worries about Lyz. When Lyz finally learns the empowering sway of the word No the hard way, you will somehow hear the voices of both women in her self-assured echoes. 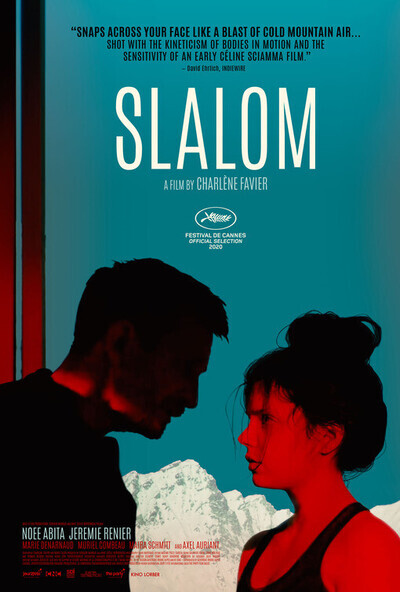