As you may recall, last month saw the release of “Greenland,” a film that dared to take the standard over-the-top disaster movie template and present it in more human terms while nonetheless using Gerard Butler. Though the end result was successful enough in doing something different with one of the most rigid of film genres, but I suspect that those who who watched it expecting the usual orgy of destruction may have been disappointed. Those people may derive more satisfaction from “Skyfire,” a Chinese disaster film that deploys all of the standard tropes of the genre but fails to do anything new or interesting with them.

The setting is Tianhuo, a volcanic island off the Chinese coast. In a prologue set 20 years ago, we see an unexpected and shockingly fast eruption wreak havoc on the place. Among those in jeopardy is volcanologist Li Wentao (Wang Xueqi), who can only watch helplessly as his wife becomes one of the victims, a loss that drives a wedge between Wentao and his young daughter, Xiaomeng (Hannah Quinlivan). In the present day, the now-adult Xiaomeng is herself working as a vulcanologist, leading a team monitoring the volcano for Jack Harris (Jason Issacs), a brash Australian tycoon who has transformed the island into a luxury resort and theme park designed to give them the full volcanic experience. Now you might think that building an enormously expensive resort on the site where a volcano went off the same year “Gladiator” came out—hell, I was trapped on a malfunctioning ride at Six Flags Great America once more than 40 years ago and I still have not set foot there since—but he ensures visiting potential investors that there's no chance that it will become active again for at least 150 years. (“We’ve conquered it for our own entertainment!”)

Of course, when Xiaomeng comes to Jack with her concerns that the volcano is about to erupt, he ignores her warnings—he's currently cash-strapped and doesn’t want to scare the investors. Xiaomeng, along with supervisor Jiang (Shi Liang) and Wentao, who also knows what's about to happen and has come to get his daughter to safety, goes out into the field for more data and that is the moment where things go higgledy-piggledy. As fireballs start cascading through the air, instantly obliterating anyone who didn’t make it into the opening credits (those who did tend to get one final moment of business before their demises), Xiaomeng, Wentao and the investors try to make it to safety while Jack watches all of his dreams literally going up in smoke. And if you thought that Taylor Swift’s “Champagne Problems” was the last word on elaborate marriage proposals gone wrong, spare a thought for Zhengman (Dou Xiao), who arranges an underwater proposal to his girlfriend (An Bai) at what proves to be both the wrong place and the wrong time.

At this point, some of you may have already dismissed “Skyfire” as a clone of “Dante’s Peak” and “Volcano” (both 1997) with a smidgen of the “Jurassic Park” films tossed in for good measure. Those with longer memories and a taste for disaster cinema, on the other hand, will dismiss it as a knockoff of the long-forgotten "When Time Ran Out..." (1980), disaster maven Irwin Allen’s swan song which also featured a resort under attack from an active volcano. That particular film was terrible—one of the worst in a genre not exactly flush with high-water marks—but the sheer desperation that it displayed in its attempts to thrill jaded moviegoers (as I recall, it is the precise moment that embarrassed co-stars Paul Newman and Jacqueline Bisset first kiss when the volcano goes off) gives it a certain goofy charm.

“Skyfire,” on the other hand, has all of the questionable elements one might find in such movies—cardboard characters, faulty plotting, risible dialogue (“This is a consequence of your arrogance!”)—but little of the fun. Director Simon West was imported to helm this one, presumably to lend his magic touch from past expensive action productions. Unfortunately, his films were only okay at best from an action standpoint—he tended to get the job when Jan De Bont and Renny Harlin were busy—and were more memorable for the star turns he got from Angelina Jolie as “Lara Croft: Tomb Raider” (2001) and the jumbo casts jostling for screen time in “Con Air” (1997) and “The Expendables 2” (2012). Here, on the other hand, the performers are as forgettable as their characters (only Issacs stands out, and not in a good way) and since we have no interest in them, it is hard to work up any concern about whether they live or die. As for the carnage, the visuals range from some decent practical effects work to some dubious-looking green-screen and CGI effects, but the only set piece that really works is a reasonably thrilling one in which people are forced to leap between two speeding monorails in a desperate bid for safety.

“Skyfire” is not a very good movie, but it isn’t the kind of bad movie that I feel compelled to come down on too hard. It's dumb and cartoonish as can be and there's never a single moment in which you care at all about anything going on, not even when they drag in an endangered child in order to tug on the heartstrings. On the other hand, "Skyfire" moves quickly enough and those looking for a way to shut off their brains and ignore the outside world for 90-odd minutes could do worse. As a full-ticket theatrical experience, “Skyfire” would not be worth the asking price. At home, for the price of a mere rental and with decidedly lowered expectations, there is a possibility that more forgiving viewers might observe all the scenes of things blazing away, sip their coffee, and maybe think “This is fine.” 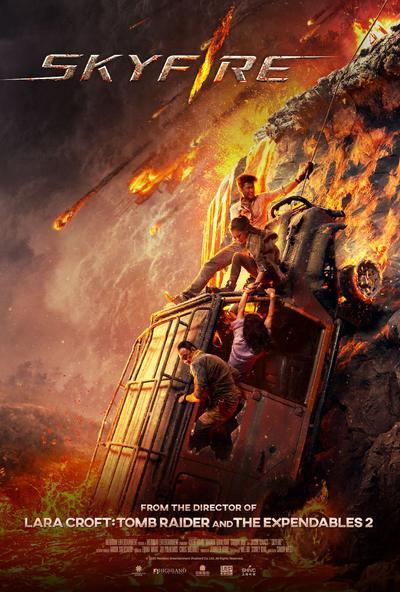 Bài An as Jia Hui