Dead white men. It may seem strange to open a review of Lisa Rovner's "Sisters with Transistors," a film about women that pushed the boundaries of music with electronics, talking about men, but the above is a phrase repeated during the picture that tells us why this story needed to be told. Music is haunted by the specters of Beethoven and Mozart, even Elvis and John Lennon, with the canon being built around these names that we are told deserve not just celebrating but worshipping. These old, dead white men. What "Sisters with Transistors" tells us is that it's time for all this to change.

A crash course about how women were often the pioneers of the unknown frontier still defined by the names of men such as John Carpenter and Edgar Froese, "Sisters with Transistors" introduces ten of these incredible women—Clara Rockmore, Delia Derbyshire, Daphne Oram, Eliane Radigue, Bebe Barron, Pauline Oliveros, Maryanne Amacher, Wendy Carlos, Suzanne Ciani, and Laurie Spiegel—using archival footage and audio to tell the fascinating accounts of how they influenced what is today one of the most popular mediums of music, accompanied by narration from artist and composer Laurie Anderson. It's a story about rebelling, freedom, and establishing new cultures and languages in a world with strict rules on how things are done, especially when it comes to women.

The narrative, which is wonderfully told through a kind of archival collage that, along with the futuristic soundtrack of the profiled composers, makes it feel like an avant-garde art film. It explores its stars chronologically and tells of how they evolved the musical culture in terms of not only language but also technology, which itself opened up an array of new avenues without needing the approval of others, again, mostly men. What's interesting is that many of the women profiled were from classical backgrounds. Oram is a prime example, having turned down a spot at London's prestigious Royal Academy of Music so she could work at the legendary BBC Radiophonic Workshop, and eventually building a proto-synthesizer that used a bespoke notation system called "Oramics."

Further commentary is provided by the likes of Holly Herndon, Jean-Michel Jarre, and Sonic Youth's Kim Gordon, with the latter talking about visiting Maryanne Amacher's "vibrating" home of wall-to-wall equipment over footage of Thurston Moore awkwardly covering his ears while the composer batters a keyboard like a woman possessed. The commentary and interviews are wonderfully audio-only, meaning the visual focus is kept on the women. Much of the footage shown is from older sources, with only Radigue, Spiegel, and Ciani captured in the present-day, but there are fun sequences where Rovner has taken vintage scenes of dancing and overlaid them with these avant-garde pieces, with the unusual juxtaposition of these bright American teenage faces bopping along to synthesized bubbles and echoing drones.

The film makes a point of centering the battles these women fought to play and record their music in male-dominated spaces, with breakthroughs often coming when men simply weren't there to interfere, such as when they were sent off to war while the women were left at home to work. The post-World War II period has shown itself to be a fertile period for the arts, and here we see Oram benefiting from surplus electronic equipment while Derbyshire's interest in esoteric sounds gestated from the air raid sirens during the Blitz, where the Nazis bombed Britain. Similarly, Radigue would listen to the sounds of aircraft when she lived near a French airport and created her own dialogue based on the delineation of the differing engine sounds and went crazy when she heard Pierre Schaeffer and his 'Musique concrète' approach, essentially the first form of sampling.

Sadly, the conflicts in the film are no different to what we hear today. Ciani talks about how she experienced sexism many a time when she went to record her music at a studio, only to be asked what she was going to sing, while Bebe Barron and co-composer Louis ended up being credited for the score to the science fiction classic "Forbidden Planet" as creating "electronic tonalities" due to protests from the American Federation of Musicians, who believed they were going to be replaced by machines. Spiegel similarly raged against the concept of a woman in American culture and the 1950s idealism of them only existing to cook and breed, cannily illustrated by an old clip of a man talking about how a woman should be congratulated because she didn't burn his dinner.

What's great about Rovner's approach is that it doesn't just tell us about these women and their spectacular innovations but shows them, such as Ciani demonstrating the usage of patch chords on a modular synth before appearing on "The David Letterman Show" with a hilariously loud Prophet-5 that makes Dave grin like a child—incidentally, Ciani was also the first woman to score a major Hollywood picture with the Lily Tomlin comedy "The Incredible Shrinking Woman." But as anyone even vaguely aware of the film music landscape over the years, there haven't been nearly enough since. Nevertheless, "Sisters with Transistors" is happy to demonstrate the power of pop culture and how movies and television helped change the mainstream perception of electronic music, from the Barrons' beautiful "Forbidden Planet" score to Derbyshire's thrumming "Doctor Who" theme, both of which have had an inestimable effect on the rise of electronic music as a legitimate art form.

Rovner's picture also rightly states the importance of Carlos' "Switched-On Bach," a truly transgressive act that is rightly mentioned as such in the film. The sheer chutzpah of taking a piece like "Air on a G String" and re-contextualizing it for this new electronic age by a woman no less, and of course she would build on this for the soundtrack to Stanley Kubrick's notorious 1971 film "A Clockwork Orange." This brings it back to the central theme of "Sisters with Transistors," the need to break out of the patriarchal penitentiary and create something new, something to scare the life out of the "canon." What is the canon but arbitrary rules laid down to suppress freedom and movement, to protect what many still consider to be a group of unimpeachable old, dead white men? It's also something to be smashed, by women and their allies, and electrifying works like "Sisters With Transistors," which often feels less like a film and more like a manifesto, can show them the way.

At the Metrograph through their virtual system starting today, April 23rd. 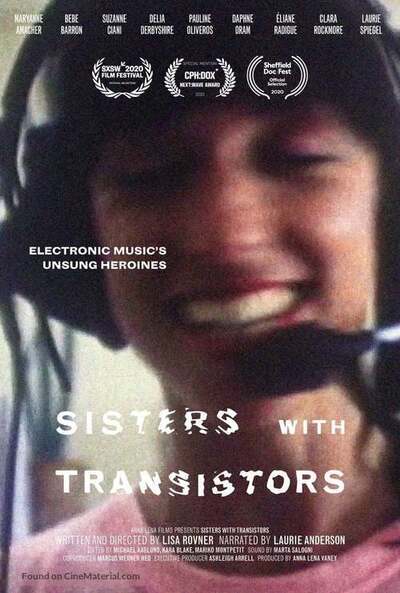