Her lover is dangerously sexy, tattooed, and sinewy. He calls her in the middle of the day for spontaneous trysts, sending her into a frenzy of trying on clothes and applying just the right amount of makeup, all in an effort to look desirable without looking as if she’s trying too hard. And when they’re finished and basking in the afterglow of their spirited cavorting, it’s clear in the cold, hard light of day—at least to us—that he’s mind-numbingly dull and they have zero in common.

Such is the harsh truth of the French drama “Simple Passion” from writer/director Danielle Arbid, based on the novel by Annie Ernaux. Arbid approaches her graphic sex scenes in matter-of-fact fashion, with nothing romantic about the lighting or pacing, heightening the sense that this torrid affair is exactly that—a fling, a spark of a connection that couldn’t possibly last. But we know from the start that Helene (Laetitia Dosch), the 40ish divorcee at the center of “Simple Passion,” views it as so much more. She clings to these moments obsessively, replaying them in her mind, scheming to see this mysterious and elusive man to the detriment of everything else in her life. You want to grab her by the shoulders, look her in the eye, and tell her to snap out of it. She’s too old for such needy, teenage-girl nonsense, and he’s not worth the considerable energy she’s devoting to him. He’s actively boring—and that’s the point. But who he is isn’t as important as what he represents: a chance to be discovered anew for the first time in a long time, to feel beautiful and wanted again.

Then again, the actor playing him is Sergei Polunin, so you can kind of see the allure. The Ukrainian bad-boy ballet star, as famous for his once-in-a-generation talent as he is for his rebellious streak, is a chiseled spectacle to behold. His character, Alexandre, is a well-dressed official at the Russian embassy in Paris. (What he does there is intentionally vague, prompting Helene to accuse him playfully of being a spy. If only.) He’s much younger and—oh, yeah—he has a wife back in Moscow. He couldn’t be more different from Helene, a university professor and intellectual who enjoys poetry and film. “He loves Hollywood crap and Putin!” she laments to her best friend on the phone. (And Polunin, we should note, is in the process of getting all his tattoos removed, including the giant picture of Vladimir Putin’s face emblazoned across his chest.)

Alexandre is also cold and aloof to the point of being evasive. The more Helene longs to know him, the more unknowable he becomes, which only makes her want him more. The fresh-faced Dosch plays every note of her character’s wide range of feelings—giddiness, anxiety, rapture, desperation—with detailed precision, and Arbid lets us drink it all in with long takes. Even when “Simple Passion” grows repetitive, and the sex turns perfunctory, and the conversations between these two become even more inane (again, all of which is Arbid’s point), Dosch’s raw physical and emotional performance pulls us in and keeps us hooked. As she wanders the aisles of the grocery store with a faraway look in her pale blue eyes, it’s clear that she’s daydreaming about Alexandre—when she remembers to go to the grocery store, that is. Increasingly, Helene grows detached from the responsibilities of her daily life, including cooking for her surly tween son, Paul (Lou Teymour-Thion). In a vulnerable moment at the dinner table, she tells her only child: “I love you, sweetheart. You’re my life.” He shrugs, a response that—to this viewer, at least—cuts deeper than any of Alexandre’s thoughtless betrayals.

While Dosch’s work is ever-changing but always accessible, Polunin never comes close to matching her acting ability, which ultimately leaves “Simple Passion” lacking. He doesn’t dance at all here, as he’s done in previous films including “Red Sparrow” and the documentary devoted to his life, “Dancer,” but that still remains the medium through which he connects most powerfully with his audience. Here, the romance is so devoid of any chemistry beyond a purely carnal attraction, we’re left wondering why this guy of all guys has the otherwise intelligent Helene Google-stalking him and incessantly checking her phone for messages. Girl, he’s just not that into you. 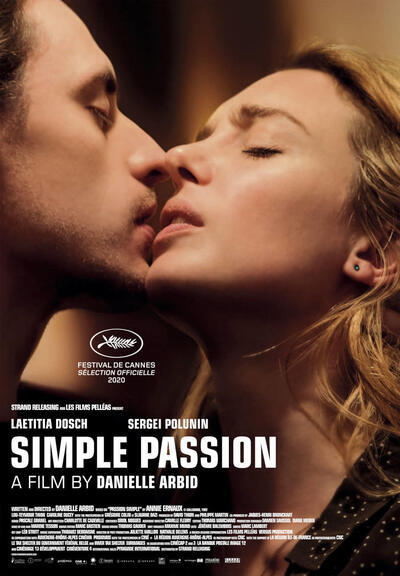