One of the best accounts to follow on Instagram is “Influencersinthewild,” in which submitters catch camera-ready wannabe celebs and social media titans in the act of hamming it up for their followers, while showing the stark backdrop of the real world outside their phone's POV. Such a reality check is an easy way to burst an influencer's bubble, but that makes them easy targets that need some wit whenever stories flip the script on them. "Shook," about an influencer being tormented by a mysterious caller, takes the bait on making a movie about such social media vanity, but its touch-and-go terror hardly offers commentary or cleverness.

Daisye Tutor stars as Mia, a makeup influencer with a wealth of followers. As we see in the opening scene, she attends a red carpet event that is revealed to be staged in a parking lot. Meanwhile there’s a dog killer on the loose in “Shook,” but in the beginning the killer goes after one of Mia’s fellow influencers. A stiletto through the jaw, an effectively nasty way to go. The death has inspired Mia to nix plans to party with her less-influencing friends Lani (Nicola Poesner), Jade (Stephanie Simbari), and boyfriend Santi (Octavius J. Johnson)—instead she'll help dog-sit Chico, the tiny dog owned by her sister Nicole (Emily Goss). Nicole is off for some scary business, to get a test to see if she has the same disease their mother previously had before she died under Nicole’s care. (Mia was off gaining more followers, avoiding this reality.) Suddenly Mia gets a call from Nicole’s creepy, pushy, self-amused neighbor Kellan (Grant Rosenmeyer), and he wants to play a game. But Kellan's questions are related to care-taking, and if she gets the questions wrong, or doesn't inflict certain pain on herself, Mia’s friends will die.

Written and directed by Jennifer Harrington, "Shook" never comes close to the nerves it's aiming for—think Drew Barrymore's famous phone call in the opening of Wes Craven's slasher classic "Scream"—because its horror attempts often come from elements that are too easy. Or, frankly, lazy. In some of the film's intended scares, Chico the dog vanishes into the night with a dog killer still on the loose, and later on there’s a sequence in which Mia must administer multiple needles into herself before time runs out. But even dog lovers, and/or those deathly afraid of needles, will be able to see how transparent "Shook" is at pressing buttons of discomfort, and hear it with each overly shrill jump-scare, therefore making it less nerve-racking. The games that "Shook" tries to play aren't very rewarding, especially when its mastermind is so uncreative.

There may be no stronger representation for how the movie struggles with depicting influencers than how it it visualizes technology, which is part of "Shook"'s supposed hook. It starts with promise by cleverly introducing Mia’s friends and boyfriend as Instagram-like profiles, a phantom hand showing their picture and scrolling down to their lower follower numbers but similarly orchestrated selfies, as if those were the total constructs of their personalities. But when it's time for the movie to depict Mia watching creepy video messages of her friends being tortured, "Shook" loses that sharpness and literally projects the footage on walls and pillows that surround Mia—a visual that makes sense in theory, or maybe at an art installation, but is so analog that it's antithetical to the modern experience that "Shook" otherwise yearns to take to extremes. It looks like someone snuck a projector into whatever room Mia is in, and it's also frustrating that the script does so little with Mia's ingrained and unique character trait of being a professional self-documenter.

Despite all that Tutor gives to the movie, which has much of her phone-acting and texting across the different spectrum of fear and exhaustion, “Shook” readily shows the limits of its own premise that unfolds mostly in Nicole's house. The script is better for the way that it humanizes Mia—it thankfully never writes her off—even if the revealed details about her previously cold-blooded nature with her family comes into focus in heavy-handed ways.

“Shook” gets a little more momentum each time there's a big twist to Kellan's game, with Kellan's terror hoping to expose the flaws within people who by trade are artificial. But there’s nothing revelatory about this goal in the bigger picture, and there are many parts of the proposed stakes that say nothing about being an influencer, so much as being a person who uses a phone and has friends. For a movie about the influencer personality, the black mirror reflects right back—"Shook" also has its own problems of being shallow, derivative, and even a little out of touch. 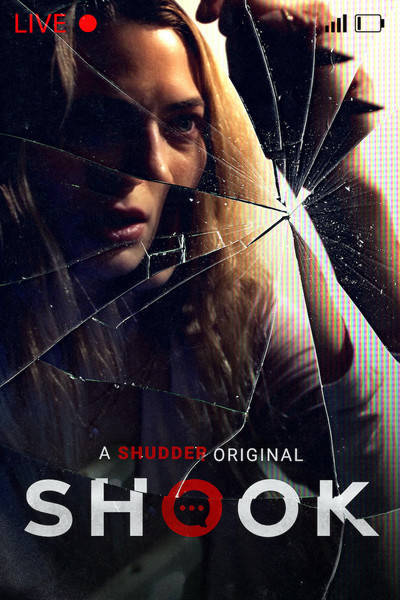