Netflix's “Shimmer Lake” is just about the first interactive title from the streaming company, especially if you like pausing and rewinding (or whatever the Netflix equivalent of that action is). The hook for this tale about crime in a dour town is that it’s all told in reverse, starting with Friday and going back day by day. This tactic is curious enough that it will take you to the end of the film, but with little else to latch onto in the process. Despite its busy nature and a cast of funny, interesting men that includes Rainn Wilson, Adam Pally, Ron Livingston and John Michael Higgins, the unconventional narrative arrangement proves to be little more than an activity. “Shimmer Lake” keeps viewers merely occupied by tracing back the dots.

Written and directed by Oren Uziel, the story begins on a Friday morning. Andy (Rainn Wilson) is on the run with a bag of money. He’s being pursued by two police officers (Benjamin Walker’s lifeless Zeke, Adam Pally’s sassy Reed) and two FBI agents (played by Rob Corddry and Ron Livingston, unamused and unamusing). Within the first two days, we get the fragments of a story: Andy and Zeke are brothers, which makes hunting for Andy days before a bit more complicated; a bank owned by a judge (John Michael Higgins) has been robbed by Andy and previous hometown hero Ed (Wyatt Russell), the latter of whom is married to a quiet woman named Steph (Stephanie Sigman, struggling to make her slippery character interesting). There’s a tragedy in the past that’s hinted at, involving a meth lab explosion and the death of Ed and Steph’s five-year-old son, which provides a dark element the movie can’t tie into its less serious shenanigans. By the time that Uziel’s twisty script takes us to the robbery, we encounter plenty of dopey criminals and bad cops, but rarely a laugh or amusing detail. Just as the heavily desaturated title location lacks charisma, so does this project.

By design, Uziel's script has a curious way to add dimension to exposition, of which this movie seems wholly comprised. I applaud how Uziel builds new relationships with each different day, and how each day ends in an unexpected places, only to begin the morning before somewhere random (with characters waking up abruptly, as if awoken from the darkest dream). In each day, big characters are killed off offering some semblance of a climax, even if we're aware of their fate. We still get the beats of their own realizations and actions, just not in the way they experienced them.

Throughout, though, this is the busy screenwriter equivalent to spinning plates while balancing on a unicycle; it takes concerted effort to pull off, but it doesn’t change the fact that the item being juggled is still just a plate. And if I told you the narrative in chronological order, you’d reply, “OK, so?” Looking at it in the movie’s assembly, it’s a whodunit; but chronologically, after you’ve watched the whole thing, it’s just the inevitable collapse of a half-wit plan, unable to make its dark turns of events glisten.

Given its cast of people largely expected to show up on a comedy podcast, “Shimmer Lake” feels more like an experiment. The collective ensemble try their hands at hard-boiled work like people failing to play the Theremin—waving around too high or low, and rarely hitting the right note. To be fair, they’re often undone by underwritten, repetitive gags (like Zeke’s macho disinterest in his sister’s poor cooking) or by failing to act believable with a phone call. But actors like Corddry and Livingston look like they just showed up on set and put on a coat. And even Rainn Wilson, who was incredible in the similarly-toned tragic superhero movie “Super,” seems like his rough draft takes were used for his character’s pivotal scenes. "Shimmer Lake" proves there's something extra tragic about watching comedians play dress-up in a movie that fails to be funny.

From start to finish, Uziel’s packaging of the story seems more inspired than its contents. As the film becomes focused with a limited amount of characters and places, the precise blocking and cinematography helps create visual symmetry, while the editing makes it sharp. Every scene seems to count in “Shimmer Lake.” But add them all together, in whatever order you wish, and the total value is still a cheap game. 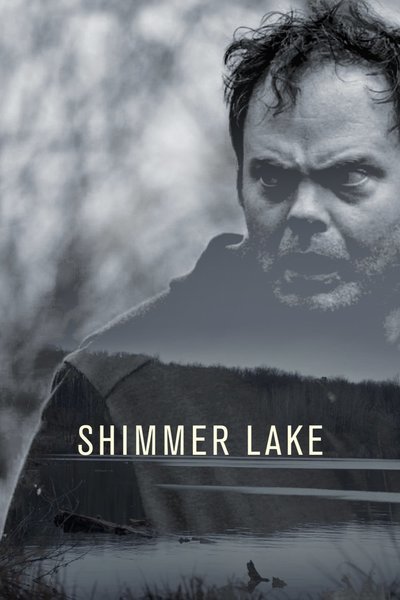