On October 5, 2017, a New York Times story by reporters Megan Twohey and Jodi Kantor made public what had been whispered about for years. One of the most powerful men in Hollywood, Harvey Weinstein, who made films that made millions at the box office and got dozens of Oscar nominations and three Best Picture wins, was a serial sexual predator whose abuses were covered up by his studio with hush money payments.

That reporting helped inspire countless #MeToo revelations, the departure of other top executives, and systemic changes that have given women more opportunities and more protection in the film industry and in other workplaces as well. Twohey and Kantor wrote a best-selling book about researching the article and persuading the women to go on the record, which is now a movie with Carey Mulligan as Twohey and Zoe Kazan as Kantor. Maria Schrader's "She Said" is a "Spotlight"-style journalism procedural that makes clear how powerful men are enabled and how devastated women are silenced. The title of the film significantly is just half of the dismissive "he said/she said" response to sexual harassment accusations with no witnesses.

"Do you think that speaking out might stop him?" That is what the survivors, many severely traumatized, want to know. As the old saying goes, when an iron pot hits a clay pot, the clay pot breaks and when a clay pot hits an iron pot, the clay pot breaks. Harvey Weinstein was the iron pot. He had immeasurable money and power. He did not hesitate to tell the young women that he could make their careers or make sure they never had a chance at one. Afterwards, they were paid to sign strict non-disclosure agreements. And the women were, unfairly but inevitably, humiliated, whether those who could not find a way to say no or those who did. Targets of predators almost always blame themselves. There are so many reasons not to say anything. There are so many secrets.

The movie balances the investigative work with the lives of the two reporters as they become consumed with the story. Twohey struggles with postpartum depression. Kantor, who has young children, receives a much-awaited call at home—she can’t miss that opportunity. "She Said" also makes clear the essential support they get from their husbands and from their editors.

It is in no way a criticism to say that this is a solid, conventional film, skillfully made. Mulligan and Kazan are excellent as always and they get strong support from Patricia Clarkson and Andre Braugher as their editors. Jennifer Ehle and Angela Yeoh are standouts as two of the women preyed on by Weinstein. As a Washington DC lawyer, I particularly enjoyed Peter Friedman as Washington lawyer Lanny Davis, who perfectly nailed the smooth, “come on, we’re all friends here” charm of a fixer worth what only the .01 percent can pay.

As in "Spotlight" and "All the President's Men," we get a telling look at the drudgery, persistence, and frustration of investigative reporting. When there is a possibility that someone might be willing to talk to them, the paper does not hesitate to send them thousands of miles away. It is inspiring to see the integrity and dedication of the reporters and their editors.

The scenes with Weinstein and his lawyers are among the movie's highlights. But it is infuriating to see what Weinstein got away with for so long, though we never hear the names of the board of directors who kept signing off on millions of dollars in hush money payments. It is even more dispiriting to think about how rare it is to give those kinds of resources to a long-term investigative project. Who will write about the all the other Weinsteins? 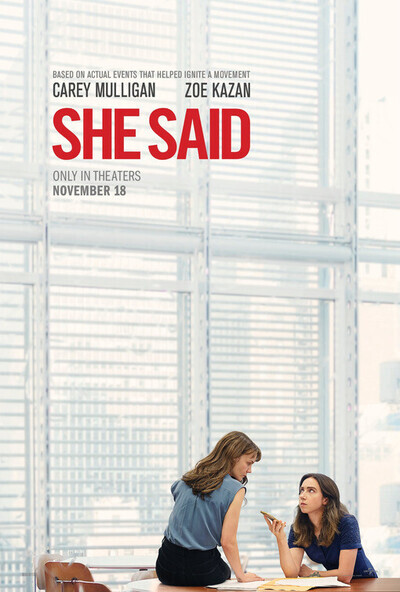 Rated R for language and descriptions of sexual assault.

Writer (based on the book "She Said" by)

Writer (based on the New York Times investigation by)