The original "Sharknado" film was a profoundly silly bit of low-budget basic cable fodder that had two things going for it—a premise that was so staggeringly goofy that one was compelled to tune in for at least a few minutes, if only to confirm that such a thing actually existed, and the fact that it premiered at a time when absolutely nothing of note was going on in the pop culture firmament and the public was looking for some form of silly distraction. The film became an instant cultural touchstone, and the producers, striking while the iron was hot, quickly launched "Sharknado 2: The Next One" into production. Like most unnecessary sequels, this one was pretty much the same film as the original, only with more cameo appearances from second-tier personalities and a shift to New York City that offered the sight of poorly rendered CGI sharks wreaking havoc on the Big Apple. The end results were pretty dumb—most jokes are when they are told for a second time—but enough people tuned in to ensure the existence of "Sharknado 3: Oh Hell No!," perhaps the first film title that also sums up the thoughts of anyone who comes across it while skimming the TV listings.

While the first film had its goofball concept to sell it and the second had the notion of sharks leveling the biggest city on Earth as its hook, it appears as if writer Thunder Levin and director Anthony C. Ferrante were never quite able to settle on a single conceit this time around and instead elected to toss a bunch of them together in the hopes that something would stick. As the film opens, erstwhile surf bum-turned-hero Fin Shepard (Ian Ziering) is in Washington D.C. to receive the Medal of Freedom from the President (Mark Cuban) when a sharknado drops in on cue and levels the city. This turns out to be only the prologue as the action shifts to the Universal Orlando Resort (a bit of corporate synergy as tacky as the special effects) where Fin's wife, April (Tara Reed), and daughter Claudia (Ryan Newman) are waiting for him to arrive to help celebrate the latter's birthday.

Alas, sharknados are popping all over what is dubbed "The Feast Coast" and as Fin makes his journey from Washington to Florida, he encounters bloodbaths at a military base and a NASCAR race before finally arriving just before the big attack at the park. Then the film makes its final shift as...you know, I am not even going to hint at it because a.) it would probably involve a Spoiler and b.) you wouldn't believe me even if I did tell you. Oh yeah, David Hassellhoff is heavily involved in this section as well and it ends with the promise/warning of a "Sharknado 4" for good measure.

Considering that it is a film that seems to have been designed solely to defy even the laxest critical standards, the very idea of trying to write a review of "Sharknado 3" boggles the mind. For the most part, it is just another helping of awkwardly-staged scenes involving people being attacked by creatures that look like Windows 95-era screen-savers while struggling to keep a straight face as they are being munched. Those with an advanced degree in dumb killer fish movies will find themselves amused by the parallels between this film and the less-than-immortal 1983 epic "Jaws 3-D"—not only are both ludicrous third installments in shark-based franchises produced in part by Universal Studios set mostly in a theme park, both debuted on July 22 to boot. This was also the infamous day that John Dillinger decided to get out of the house to see a movie—too bad "Manhattan Melodrama" didn't have a shark or we might have had something here.

As with the previous films, the acting is pretty much besides the point, though I must admit that Tara Reid deserves some kind of good sport award in regards to the circumstances surrounding her penultimate scene, the one moment when the film truly succeeds in raising the bar for sheer insanity. Then there are the cameo appearances from a large number of B-list celebrities for whom the "Sharknado" series serves as the equivalent of the old "Cannonball Run" films by getting once-familiar faces off the streets and in front of the camera again, regardless of the circumstances. This time around, they include the likes of Bo Derek, Maria Menounos, Lou Ferrigno, Robert Klein, Jackie Collins (who has to introduce herself), virtually the entire "Today Show" gang (including Hoda and Kathie Lee, apparently working for Muscatel), Penn & Teller, Frankie Muniz (who gets the centerpiece death scene), Anthony Weiner and no doubt a few that I missed along the way. The two most notable appearances of the bunch are probably Ann Coulter, playing the vice-president (none too convincingly), and Michelle Bachmann, playing herself (even less convincingly). Shockingly (Spoiler Alert!), neither one of them gets eaten by a shark which leads me to one of two conclusions—either the filmmakers simply weren't smart enough to fully maximize the resources they had on hand or even poorly designed CGI sharks of the sort seen here are smart enough to not even attempt to swallow anything that those two have to offer.

Once again, I drift back to the question of how to review a movie that consciously tries to be the dumbest and most implausible thing since the previous "Sharknado" film.  After much thought, I am going to give it two stars because this marks a definite step down in quality from its predecessors that is only partly redeemed by some cheerful silliness. However, those of you who are unabashed fans should probably add a star and those who have never had any use for them should subtract one. Beyond that, my guess is that we will all pretty much forget the entire thing by the end of August and then we will meet up here again about a year from now and do this all over again with "Sharknado 4." 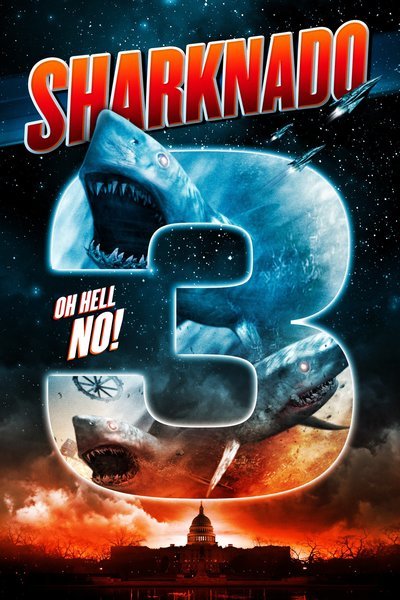 Bo Derek as May