Who doesn’t like a rousing ruff-and-ready tale of doggy derring-do? And if the pup in question turns out to be a military hero as well? They’re even more deserving of a salute of late, as shown by such recent releases as the fictional “Max” and fact-based “Megan Leavey” that focused on canines who have faithfully served and sacrificed for their country.

There is a reason why Rin Tin Tin, a German shepherd puppy who was rescued by an American soldier during World War I, became one of the biggest box-office stars of the silent era. The dog bone is deeply connected to the feel bone in humans and woe to those who toy with that connection without proper care. I rarely hear anyone beseechingly ask if people meet their demise in a movie before buying a ticket. But if a pooch goes paws up, many sensitive souls often refuse to go.

Besides, these are about the only big-screen savior roles that are Mark Wahlberg-free zones, at least until he learns how to walk on all fours and beg for a biscuit.

Joining the cinematic fur squad is “Sgt. Stubby: An American Hero,” an animated battlefield adventure about the true-life World War I exploits of a celebrated stray Boston terrier. In 1917, the scruffy vagrant wandered into the Yale training grounds for the 102nd Infantry, part of the New England-based 26th “Yankee” Division in 1917. He adopted a 25-year-old private, Robert Conroy (a regular-Joe doughboy sensitively voiced by Logan Lerman, star of the “Percy Jackson” franchise) as his master and joined in the basic training exercises. Stubby—so named for his stub of a tail and diminutive stature—even learned how to lift his right paw into a salute, a trick that proved to be a surefire way to win over Conroy’s superiors.

When Conroy and his fellow troops were shipped out to the frontlines in France as backup for weary local soldiers who have spent years fending off the Germans, Stubby snuck aboard as well. After being discovered, he became an unofficial mascot and even got his own dog tags. It wasn’t long before he proved his worth in the trenches. He scared away the rats, barked alerts to warn about the release of poison gas or an incoming bomb, comforted the wounded, sniffed out the presence of the enemy and captured a German soldier. He even was wounded in action. Little wonder that Stubby was the first dog to be given a rank in the U.S. Army and was presented with a gold medal by Gen. John J. Pershing himself.

All these events and more are captured with pleasing-enough CG animation. But by now, you might be thinking, just how seriously does a PG-rated cartoon meant for family viewing present the horrors of war considering that a cute street mutt is the main attraction? Better than you might imagine. No one is going to mistake “Sgt. Stubby” for “Paths of Glory” or even “War Horse,” but documentary filmmaker Robert Lanni manages to suggest the dangers of combat without shedding a drop of blood or showing a wound. An eerie scene where yellow-greenish cloud of mustard gas envelopes a town like a deadly fog is a standout. Nor does he demean Stubby’s stature as he wisely restricts his communication to strictly doggy-style with woofs, whines, grunts and growls. As for typical animal capers, any bathroom-type humor is verboten save for one scene where Stubby indulges in some self-grooming where the sun don’t shine.

Lanni also is sharp enough to recruit a couple notable actors with international appeal to warm up the proceedings for his centennial tribute to the end of the Great War. You probably can’t tell from her homey all-American accent, but that is England’s own Helena Bonham Carter narrating the goings-on in the guise of Margaret, Robert’s back-home sister and mother figure given that both of their parents are deceased. But it isn’t difficult to recognize Gerard Depardieu’s peasant-like rumbles as burly Gaston, a chef in civilian life who tutors both Robert and Stubby in the ways of  trench warfare while occasionally taking swigs from a bottle of wine. Clearly working on a tight budget, Lanni and co-writer Mike Stokey II (a Vietnam vet and technical adviser for such projects as “Born on the Fourth of July” and “Band of Brothers”) don’t overpopulate the screen with a platoon of characters and this minimalist approach is a benefit for the most part. Conroy’s two buddies function as stand-ins for those who fought. German-American Schroeder (Jim Pharr) represents patriotic immigrants who fought in the war while Elmer (Jordan Beck) is a suspicious type who initially butts heads with a French soldier and insults him by calling him “Froggy,” but eventually learns to appreciate his foreign comrades in arms.

Much like the way that Stubby was often underestimated before he found his calling, I came into this film not expecting how much I would appreciate a more thoughtful use of animation to tell an engaging story. By the time George S. Patton shows up and perches a proud Stubby atop his tank as the battle draws to a close, I had long surrendered. 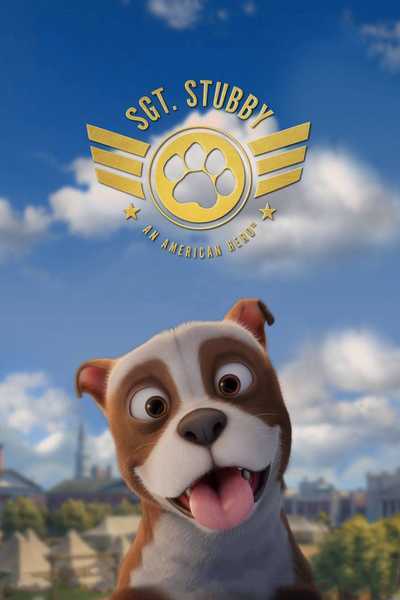 Rated PG for war action and some thematic elements.