Last year, four military dogs received medals for valor in the inaugural American Humane K-9 Medal of Courage Awards, with American Humane President Robin Ganzert saying at the ceremony on Capitol Hill, "We feel it is time to recognize and honor the extraordinary feats and acts of devotion these heroic animals perform every day.” Military dogs are valued for their noses, their ability to sniff out IEDs, weapons caches, other buried explosives, as well as their loyalty and high intelligence. There's a YouTube clip showing a soldier reuniting with his military dog, and as the soldier approaches the dog's cage, the dog starts howling with joy and excitement. She can smell him coming. Once the cage door opens, the dog—a scrappy black Labrador—circles endlessly around her former handler, not even stopping for pats or kisses. If the bond between human and dog is already intense, dogs being what they are, then the bond between a military dog handler and his or her canine partner is even more so. "Megan Leavey," directed by Gabriela Cowperthwaite, tells the story of the profound bond between a Marine corporal and her war dog Rex.

Based on a true story, "Megan Leavey" is that rare breed: a war movie that actually shows something new about war, a sub-culture within a familiar sub-culture, the world of the military's K-9 units. For that alone, it should be applauded. Everyone should know how incredible these dogs are. But beyond its fascinating informational aspects, "Megan Leavey" is a powerfully emotional film that somehow—unbelievably, considering the subject matter—avoids sentimentality altogether.

Kate Mara is Megan Leavey, seen at the outset of the film as an aimless young woman living in upstate New York, sleeping all day, fighting with her mother (Edie Falco), doing nothing with her life. One day, after seeing two Marines in their parade-ground finest walk into a recruiting center, she joins up. And before she can even catch her breath, she's in boot camp. The opening sequence of "Megan Leavey," setting up Megan's life "before" is no longer than five minutes. Boot camp passes in a raging montage showing recruits climbing walls, doing pushups, being screamed at, etc. (The real-life Megan Leavey is one of those screaming drill sergeants.) The "setup" is not belabored. We get it in two or three shots. Cowperthwaite is an efficient director, and the script (by Pamela Gray, Annie Mumolo, Tim Lovestedt) is also a model of efficiency. In an industry where movies, in general, are too long, where every "t" is crossed to make sure we "get it," such productivity is almost a miracle. We do get to know Megan over the course of the film, but we get to know her through her relationship with the dog she is assigned once she joins the Marine Corps' K-9 unit, a ferocious and difficult to handle German Shepherd named Rex. It is only in that relationship that Megan, like the Velveteen Rabbit, starts to "become real."

Why Megan is drawn to joining the K-9 Unit is—like her reasoning for joining the Marines in the first place—left unsaid. After misbehaving one night with a couple of other drunk recruits, she is assigned "shit detail," literally it turns out, cleaning the dog cages. But she watches the handlers working with their dogs in the outdoor training area, and lobbies to get a position with the unit. The commanding officer is Gunny Martin, played by Common, who was so phenomenal just recently in "John Wick: Chapter 2," and is great here as well. Megan pesters him enough that he finally gives her the go-ahead. And, of course, she is assigned the dog she fears the most, the dog that everyone fears the most: Rex.

"Megan Leavey," so good in its most important aspects, is especially good in these sequences showing the training processes for these soldiers and dogs. This is an aspect of military culture we have not seen before. The dogs know how to sniff out explosives, but the soldiers have to learn how to give commands, to praise, to guide, and—if necessary—to provide medical assistance to their injured canines. All of this requires intense bonding and mutual trust. As the K-9 trainer (Tom Felton) reminds Megan: "Everything you feel goes down leash." Megan is not a particularly warm person, she doesn't make connections easily. The trainer says to her, "I can't teach you how to bond."

The bonding happens through the doing. The deployment to Iraq that follows is a steep learning curve for both Megan and Rex. Ramon Rodriguez plays Matt Morales, another dog handler already on deployment, who shows Megan the ropes, giving her tips and warnings. There are bounties on their heads already, he tells her, even higher bounties for female canine handlers. There's some light-hearted joshing between Matt and Megan (she's a Yankees fan, he's a Mets fan, enough said), and they play cards late at night, their canine partners sleeping in the desert sand at their feet.

Cowperthwaite's direction is specific and confident, especially in one extremely complex battle scene where—unlike in a lot of films nowadays that over-rely on shaky-cams and quick-cuts—you can tell what is happening, who is doing what, and why. But Cowperthwaite also understands that the way this material works is to present it in a straightforward manner. She trusts the material, trusts her lead actress to deliver the goods, and trusts us out here watching.

Megan's story is well-known (it made the national news at the time), but even if you remember the details, the way it plays out—and the increasing desperation of the PTSD-rattled Leavey to get what she wants and needs—is heartrending to endure. The only criticism I really have is with the film's un-evocative title.

Sometimes it's helpful to imagine the potential ways this film could have gone wrong in order to understand why it works so well. If Megan's "problem with bonding" had been over-stated, underlined, pathologized, etc., then her Velveteen-Rabbit transformation would not have the power that it does. There's a moment late in the film when she talks about Rex to a support group and she breaks down in tears. There is nothing "performative" about this scene, not in Mara's acting, and not in the way Cowperthwaite films it. Mara is in medium shot, for example, not a close-up. A close-up would telegraph, "Here is the Big Catharsis. Cue strings."

The emotion in "Megan Leavey" is not forced. It flows, up and down the leash, just like it's supposed to. 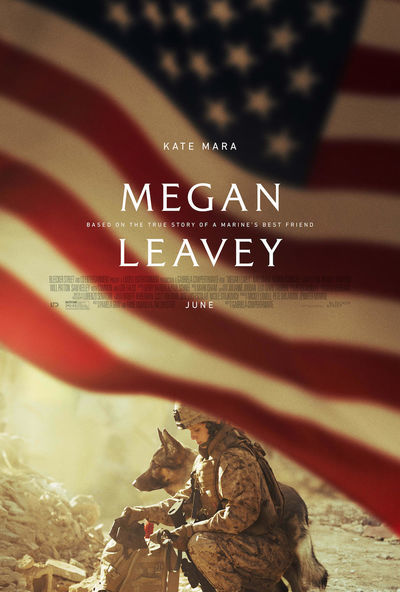 Will Patton as Jim