Bradley Cooper and Jennifer Lawrence have brought such energy and chemistry to their relationships in their scenes together in “Silver Linings Playbook” and “American Hustle” that viewers may be tempted to give their latest collaboration some attention despite the stories of post-production drama and bad buzz that has accompanied it. I certainly approached it with an It Can’t Be THAT Bad attitude, largely due to my admiration for its stars, but also because I’ve respected director Susanne Bier’s work in the past (particularly “Brothers” and “After the Wedding”). Ten minutes in, one can tell something is wrong with “Serena”. By the misguided ending, it’s a flat-out disaster, the kind of film that its cast and crew hope gets buried as quickly as possible as they race to move on to other projects. Given the fact that it was filmed almost three years ago, Cooper and Lawrence have likely forgotten they made it by now. Follow their lead.

It is Depression-era North Carolina and George Pemberton (Cooper) seems to be one of the few successful businessmen in his mountainous region, running a flourishing timber empire. With the assistance of a business partner named Buchanan (David Dencik) and a spiritually-guided hunter named Galloway (Rhys Ifans), the Pemberton name is becoming well-known, although the local Sheriff (Toby Jones) suspects something is afoot. Into this empire falls a Lady MacBeth in the form of Serena Shaw (Jennifer Lawrence), who quickly becomes Serena Pemberton (over such memorable lines as “I think we should be married.” Smile. End scene.)

Serena rubs everyone but George the wrong way. She barges into the lumber company ordering people around and accusing them of doing six months of work in nine months. She is clearly designed as a force of change, first feeling competition for George’s business from Buchanan and then feeling competition for his legacy from a townswoman who happens to be the mother to George’s illegitimate child. But Serena, despite Lawrence’s best efforts isn’t a character. She has melodramatic emotions and plot twists forced upon her with no depth or thematic resonance to any of it. She bends to the will of a manipulative narrative as if no one ever paused to answer questions of motive or back story for this character. Why does she feel so strongly for George? Why does she take center stage in one scene but pull back in another? She is maddeningly inconsistent, and so the film has a thematic vacuum in the middle of its narrative. Who is the title character and why do we care about her should be two of the first questions asked when crafting a screenplay like “Serena”. They never were here.

It doesn’t help that Bier finds a way to over-direct and under-direct in alternately frustrating manners. The first act is filled with an overuse of score, gauzy camerawork and slow-mo montages of people riding horseback and making love by candlelight. But as the narrative gets darker and death enters this little world, Bier loses the romantic, old-fashioned filmmaking style, and the entire affair just becomes dour and depressing, which is all the more startling given the two typically-vibrant actors who star in it. None of it feels organic, genuine, or even moderately entertaining. It is a film in which performers and crew go through the motions in such a way that one can sense that they knew, long before production wrapped, that something was wrong. Maybe that’s why it took so long to come out. Even the people who made it didn’t want to finish it. 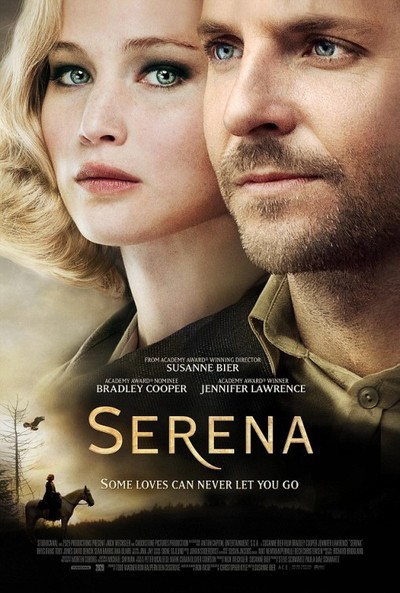 Rated R for some violence and sexuality