Of all recent historical events American movies have tried to dramatize, perhaps none has been failed so resoundingly as the Iranian Revolution and its aftermath. The subject has been traduced over and over, if not always identically. Though essentially a thriller that could have been set in a fictional time and place, Ben Affleck’s “Argo” at least deserved points for a prologue that made a stab at providing some historical context.

More typical, unfortunately, was the grandmother of this genre, the entirely laughable and context-free 1991 Sally Field-starrer “Not Without My Daughter.” Following in that film’s lamentable tradition, the new “Septembers of Shiraz” re-creates its 1979 Tehran in Bulgaria, where an international cast led by Adrien Brody and Salma Hayek was directed by an Australian, Wayne Blair. The result is another vacuous melodrama/thriller that doesn’t lay a glove on the era’s historical complexities.

Though based on a well-regarded bestseller by Dalia Sofer, who escaped with her family from Iran after the revolution, the film (scripted by Hanna Weg) relies on the same old simplistic images and reductive assumptions that have characterized most U.S. media coverage for the last 37 years. The well-to-do Tehrani family at the story’s center is Jewish, but very little is made of that—or of the rich culture of Persian Jews—in the drama, which devotes of its imaginative energies mainly to portraying Iranian Islamists as two-dimensional baddies.

When the tale begins, it’s the fall of 1979 and the Amin family, including dad Isaac (Brody) and mom Farnez (Hayek-Pinault), is still living a very upper-crust life at their plush home in north Tehran. We’re not told anything about their attitude toward the revolution, or that it was supported by an overwhelming majority of Iranians. The only sliver of context we’re given is a brief TV news report which indicates that the Islamists who led the revolution are now consolidating their power, “shariah law” has been imposed and many of those who supported the revolution, including students and “socialists” (meaning communists: the Tudeh party), are being dealt with harshly.

But none of this has touched the Amin family. Isaac accrued his wealth through a successful jewelry business, and he seems as well-regarded as he is successful. Then comes the fateful knock at the door, and he’s dragged off to prison by the Revolutionary Guards.

Like many others, he’s not accused of any crime but is subjected to a brutal and prolonged interrogation nonetheless. His chief tormentor, a burly man named Mohsen (Israeli actor Alon Aboutboul), allows that he was imprisoned and tortured under the Shah’s regime, but that doesn’t keep him from inflicting the same punishments on Isaac, who he quizzes about his trips to Israel. Gradually the verbal pressure turns into violent physical and mental abuse, including the obligatory scene of a mock-execution.

Monotonous and repetitious, the scenes of Isaac’s imprisonment alternate with ones showing Farnez at home trying to deal with the anxiety of not knowing the fate of her husband. Her longtime servant, Habibeh (another fine performance by Shohreh Aghdashloo), is at first sympathetic but soon begins parroting the revolutionary rhetoric of her son Morteza (Navid Navid). Farnaz realizes that Morteza is ripping off the family jewelry while saying he’s just trying protect Isaac’s precious stones.

Eventually, Isaac thinks he spies a way out of prison and offers Mohsen all the contents of his bank accounts in exchange for his release. Put this beside the activities of the weaselly Morteza and you have the film’s view of Iran’s 1979 revolutionaries: rather than political or religious zealots, they were simple thieves, avid to lay their hands on the glittering wealth of the country’s former elite.

That myopic view, no doubt, is the same lens through which elites usually view their political displacement: they did nothing wrong, of course, but were entirely spotless victims of ungrateful lower-class miscreants motivated by greed for what wasn’t theirs. If played as a satire in which the clueless upper classes bring down the roof on themselves—something Iranian director Dariush Mehrjui once did in remaking Luis Bunuel’s “The Milky Way” in a Persian setting—this tale might have had a prayer of saying something penetrating about the complexities of the social and political realities it portrays. As is, it gives inadvertent support to Iranians’ suspicions regarding the artistic corruption of Western cinemas.

Incidentally, the city of Shiraz is never seen in the film, nor is the wine that bears its name. The title refers to an idyllic time the Amins enjoyed during the good old days of the U.S-backed Shah’s regime. 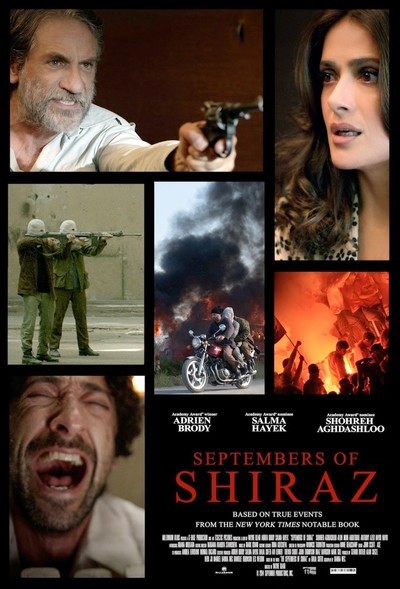 Rated PG-13 for thematic content involving interrogation, brutality and disturbing images, and for some partial nudity and brief strong language.