You can't get 'em up in the mornin'

On Sept. 11, 1857, at the Mountain Meadows Massacre, a group of fanatic Mormons attacked and slaughtered a wagon train of about 120 settlers passing through Utah on their way to California. Can we all agree that the date has no significance? No, we cannot, because "September Dawn" is at pains to point out that on another Sept. 11, another massacre took place, again spawned by religion.

But hold on. Where did I get that word "fanatic"? In my opinion, when anybody believes their religion gives them the right to kill other people, they are fanatics. Aren't there enough secular reasons for war? But there is no shortage of such religions, or such people. The innocent, open-faced Christians on the wagon train were able to consider settling California, after all, because some of their co-religionists participated in or benefitted from the enslavement of Africans and the genocide of Native Americans.

Were there fanatics among those who ran the Salem Witch Trials or the Inquisition or the Crusades? Or the Holocaust? No shortage of them. Organized religion has been used to justify most of the organized killing in our human history. It's an inescapable fact, especially if you consider the Nazis and communists as cults led by secular gods. When your god inspires you to murder someone who worships god in a different way or under another name, you're barking up the wrong god.

The vast majority of the members of all religions, I believe and would argue, don't want to kill anybody. They want to love and care for their families, find decent work that sustains life and comfort, live in peace and get along with their neighbors. It is a deviant streak in some humans, I suspect, that drives them toward self-righteous violence, and uses religion as a convenient alibi.

That is true, wouldn't you agree, about Mormons, Christians, Muslims, Jews, Hindus, Buddhists and so on? No, not all of you would agree, because every time I let slip the opinion that most Muslims are peaceful and nonviolent, for example, I receive the most extraordinary hate mail from those assuring me they are not. And in a Muslim land, let a newspaper express the opinion that most Christians and Jews are peaceful and nonviolent, and that newspaper office is likely to be burned down. The worst among us speak for the best.

Which brings us back to Sept. 11, 1857, when a crazy Mormon zealot named Bishop John Samuelson (Jon Voight) ordered the massacre of the visiting wagon train, after first sending his spokesman to lie that if they disarmed, they would be granted safe passage. Whether the leader of his church, Brigham Young (Terence Stamp), approved of this action is a matter of much controversy, denied by the church, claimed by "September Dawn."

What a strange, confused, unpleasant movie this is. Two theories have clustered around it: (1) It is anti-Mormon propaganda to muddy the waters around the presidential campaign of Mitt Romney, or (2) it is not about Mormons at all, but an allegory about the 9/11/01 terrorists. Take your choice. The problem with allegories is that you can plug them in anywhere. No doubt the film would have great impact in Darfur.

There isn't anything to be gained in telling this story in this way. It generates bad feelings on all sides, and at a time when Mormons are at pains to explain they are Christians, underlines the way that these Mormons consider all Christians to be "gentiles." The Mormons are presented in no better light than Nazis and Japanese were in Hollywood's World War II films. Wasn't there a more thoughtful and insightful way to consider this historical event? Or how about a different event altogether? What about the Donner Party? They may have been cannibals, but at least they were nondenominational.

If there is a concealed blessing, it is that the film is so bad. Jon Voight, that gifted and versatile actor, is here given the most ludicrous and unplayable role of his career, and a goofy beard to boot. Stamp, as Brigham Young, comes across as the kind of man you'd find at the back of a cave in a Cormac McCarthy novel. The Christians are so scrubbed and sunny, they could have been teleported in time from the Lawrence Welk program.

And isn't it sickening that the plot stirs in some sugar by giving us what can only be described as a horse whisperer? This movie needs human whisperers. And giving us a romance between the bishop's son and a pretty gentile girl? And another son of the bishop who dresses up like an Indian and goes batty at the scent of blood? And real Native Americans who assist the Mormons in their killing, no doubt thinking, well, we can get around to the Mormons later? I am trying as hard as I can to imagine the audience for this movie. Every time I make any progress, it scares me. 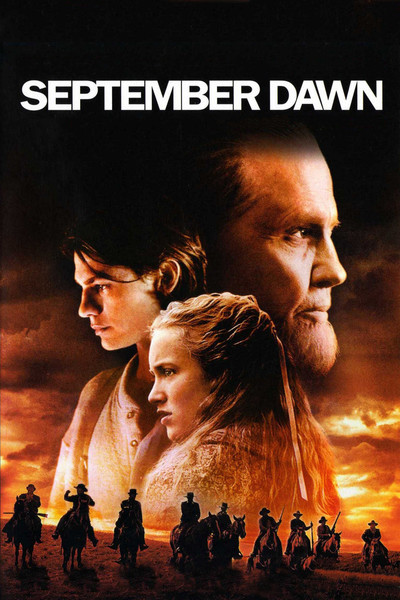