In the late ’90s, while doing some globe-trotting research for a book on Iranian cinema (which only culminated with the release this week of my In the Time of Kiarostami: Writings on Iranian Cinema), I went to England to interview one of that cinema’s legendary characters. I took a train to Sussex from London, then jumped in a taxi. The filmmaker, who’d lived in England for decades, was aged, so I suspected the address I had might lead me to a small bungalow at a retirement home. But when the cab pulled up to the address, I was astonished to see something entirely different: an enormous, ornate mansion that might also be described as a castle or palace.

Ebrahim Golestan was just as imposing as his abode. Because people had described the reclusive auteur with words like irascible, fearsome, and unapproachable (some told me I was crazy to seek him out), I was nervous when I knocked on the mansion’s huge front door. But Golestan—white-haired yet physically robust—opened it and welcomed me warmly. Over the next two hours, I discovered he was full of feisty, sometimes scathing opinions on various subjects and proud of his work. As a young man in Iran, he pursued a literary career, translating foreign authors like Hemingway, and then founded a film company and directed short documentaries, which were among the first Iranian films to go abroad and win prizes.

His first feature, “The Brick and the Mirror,” a brilliant, Antonioni-like study of urban anomie, is the most important and accomplished Iranian feature from before the eruption of the Iranian New Wave in 1969. But I was there to interview him about another film. In the ‘60s, Golestan had been lovers with Forough Farrokhzad, who is regarded as the greatest female poet in Iran’s 2,500-year history. He sent her to England to study filmmaking and later assigned her to direct a short doc about a leper colony that he produced. The result, “The House Is Black,” is widely considered the most important Iranian short film in history; its poetic style had an acknowledged influence on directors including Kiarostami and Makhmalbaf. (My interview with Golestan about the film has never been published. I intended to include it in my new book but then decided it didn’t fit.)

Since that day in the late ‘90s, I hadn’t glimpsed Golestan’s extraordinary pile until last night when I watched Mitra Farahani’s fascinating “See You Friday, Robinson.” The film, which will run December 14-20 at New York’s Museum of Modern Art, comprises a set of weekly, long-distance communications between Golestan and Jean-Luc Godard, the latter at his home in Rolle, Switzerland. Filmed in 2014, the documentary is as inspired as it is unusual. An Iranian ex-pat who has made other docs about aging artists (I reviewed her “Fifi Howls from Happiness” here), Farahani was a producer on two late Godard films and thought that pairing him with Golestan was bound to produce some interesting exchanges. She was right. Since their email messages were sent on Friday, Godard proposed “See You Friday, Robinson” as a nod to Robinson Crusoe.

The citation of the Daniel Defoe work is appropriate too, for how it evokes an inevitable theme of this long-distance conversation: solitude. Though the two men have women in their lives, both seem encased in their private thoughts and memories as the end of life approaches. “My solitude recognizes your solitude,” Godard messages Golestan at one point. Remarkably, neither complains about the indignities and infirmities of old age. Though we see them in hospital beds at different points in the film, they exhibit an almost classical (and in some cases, even rather cheerful) stoicism about the inevitability of declining health.

It might be said that most of their conversations are about art, but they are talking about themselves and each other, and the language they use is art. Godard’s messages include images (the first is Goya’s gruesome “Saturn Devouring His Son”) as well as texts, and it quickly becomes evident that the two auteurs are well-matched since they have such deep knowledge of painting, music, and literature (cinema appears too, though less than you might expect). Anyone who has followed Godard’s idiosyncratic films over the last 30 years will recognize his cryptic, allusion-filled style of communication here. Golestan finds “a certain pretentiousness” in all this and perceptively attributes it to Godard’s “Christian childhood” in Calvinist Switzerland. But he also clearly engages with it.

Both filmmakers had early and enduring fascinations with language, and the literary references here range from John Donne and Tolstoy to Andre Bazin and Dashiell Hammett. Golestan waxes eloquently about the great Persian poet Saadi and perhaps gives Godard a lesson. For his part, Godard more than once brings up James Joyce and so reminds us that no great filmmaker was ever as connected (and indebted) to the literary modernism of Joyce, Pound, Eliot, et al. as he. Golestan smilingly replies that he’s never managed to read Finnegans Wake but has read every book about it.

Watching the two men in their environs supplements their written and visual communications. With lordly aplomb, Golestan ranges around his mansion, which includes a gigantic fireplace that, when I saw it, couldn’t help but bring to mind Charles Foster Kane’s in Xanadu. In his modest home in Rolle, we see Godard wearing cargo shorts (who knew?), sorting laundry as he chews a huge cigar and mutters about “sadness.” There’s a mood of gloom and sadness here that echoes previous Godard films such as “JLG By JLG.” But all is not bleak or morbid. Golestan espies the humor underlying some of Godard’s caustic pronouncements and says, “He’s playful ... knowingly, sagely.” 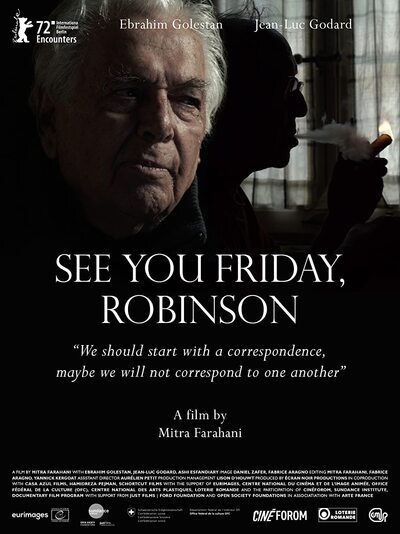 Jean-Luc Godard as Himself

Ebrahim Golestan as Himself

Ashi Esfandiary as Herself