The thriller “See for Me” seems to have been created in order to answer the question “What would you get if you crossed the Audrey Hepburn classic 'Wait Until Dark' with a 'Call of Duty'-style video game?” As concepts go, that is certainly attention-grabbing and it will most likely lure viewers to Randall Okita’s film who are curious to see how it all plays out. What they'll get is a movie that never quite manages to live up to its intriguing concept, thanks mostly to a couple of key creative decisions that undercut any chance for real emotional involvement and render it as little more than an exercise in only moderately inventive style.

Our heroine is Sophie (Skyler Davenport), a downhill skier whose once-promising career fell to pieces after she went legally blind. Now bitter and withdrawn, Sophie ignores her mother’s well-meaning suggestions about returning to the slopes and instead elects to take a series of jobs housesitting mansions that will allow her to filch a couple of expensive and easily missed items she can sell for some quick cash. As the story begins, she's heading up to the inevitably remote mansion belonging to Debra (Laura Vandervoort) for a couple of days to cat-sit and hopefully make off with a bottle of wine worth a few thousand dollars. She has hardly arrived when she accidentally locks herself outside and winds up utilizing See for Me, an app that connects her with volunteers who will help guide her around via her phone’s camera. Her aide is Kelly (Jessica Parker Kennedy), a former soldier turned round-the-clock gamer who utilizes her skills in both areas to quickly get Sophie back inside.

That night, three men—Otis (George Tchortov), Dave (Joe Pingue), and Ernie (Pascal Langdale)—break into what they think is an unoccupied house in order to bust open a hidden safe and liberate its contents on the orders of a fourth man (Kim Coates) on the phone. Once the two parties become aware of each other, a game of cat-and-mouse ensues throughout the mostly darkened mansion as Kelly tries to get Sophie to safety, even as Sophie herself contemplates throwing in with the thieves in exchange for a cut.

The initial idea for “See for Me” is undeniably gripping—the kind of audacious concept that someone like the late, great Larry Cohen might have transformed into a nifty exercise in B-movie ingenuity. But the screenplay by Adam Yorke and Tommy Gushue makes two key conceptual stumbles—one perhaps unavoidable—that prevent it from living up to its promise. The unavoidable problem is that while the idea of a home invasion thriller in which a blind person is guided with help of an app sounds clever, it does not add up to much because it puts Sophie on equal footing with the thieves way too early, considerably diminishing the threat potential. Perhaps this could have worked in the hands of a more visually inventive filmmaker like Brian De Palma, someone who could have still milked the concept for maximum suspense, but Okita never quite finds that next level of inspiration. We instead are left waiting impatiently for the presumably inevitable moment when Sophie’s phone will die and she will be forced to fend for herself without her high-tech advantage.

The other flaw with the film, frankly, is Sophie herself, who is presented in such an off-putting manner that most viewers will find it difficult to root for her or her survival. I get that the film wants to push back against the standard trope of the sweet, helpless, and plucky blind young woman that we in the audience are clearly meant to feel protective towards throughout. Much like the premise, that is interesting up to a point. However, the screenplay goes way too hard in the other direction, as Sophie’s moral ambiguity too often curdles to the point where sympathizing her becomes nearly impossible, especially when her self-serving behavior later ends up having fatal consequences for another character.

This, I should stress, is not the fault of Davenport, who is legally blind in real life and is also easily the best and most interesting piece to "See for Me." Davenport delivers a performance that is often stronger, smarter, and more compelling than the material frankly deserves. Although their work is ultimately not enough to make “See for Me” anything more than a gimmick movie that never quite pays off, Davenport almost makes it worth watching and will leave you wondering about what they could accomplish with stronger material. 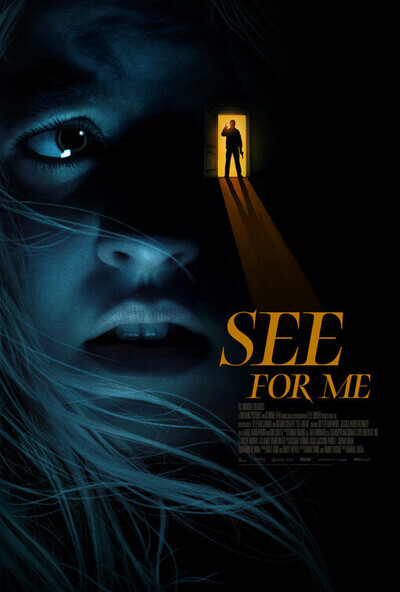