The story of steroid use in baseball has yet to write its final chapter. Outrage seems to have lessened about what performance-enhancing drugs did to America’s pastime, to the degree that Alex Rodriguez can be an announcer and tabloid star but not quite to the degree that Roger Clemens can be in the Hall of Fame. We seem to be in this gray area, between the moral outrage that once greeted the suggestion of someone having a pharmaceutical upper hand, and throwing up our hands and admitting that there’s not much we can do to stop people from trying to get an advantage on their competition. It’s a weird world in which A-Rod’s engagement creates an alert on my phone but the thought of Barry Bonds being in the Hall of Fame creates heartburn in the protectors of baseball’s throne. This weird world is the perfect place for a movie like “Screwball,” Billy Corben’s stranger-than-fiction telling of the Biogenesis scandal and a movie filled with enough memorable moments that it should please both fans of baseball and those who gave up on the sport years ago.

The lunacy of “Screwball” could someday be adapted into an award-winning feature film a la “I, Tonya.” It has that same kind of out-there, Coen-esque lunacy in which people’s greed and stupidity led to national news. There are plenty of dumb people out there, but only a select few that end up playing on as big a scene as Tony Bosch and Porter Fischer, who arguably changed the trajectory of one of the most popular sports in the world.

Bosch is a classic true crime doc character—the charlatan. A self-proclaimed specialist who (maybe) got a medical degree in Belize, Bosch became the Tony Montana of the PED craze, working with a client list that included Manny Ramirez, Ryan Braun, and Alex Rodriguez, who comes off as a complete lunatic in “Screwball.” According to the film, A-Rod used to watch highlights of himself in an all-white apartment under a painting of himself as a centaur. When the scandal broke, Rodriguez became the most vocally defensive of the charges levied against him by Bosch, and so it feels like there’s a little bit of playback in how simply crazy he comes off here. You won’t be able to watch him on sports broadcasts again without picturing the centaur painting. I can’t.

“Screwball” would be interesting enough if it was just about an egocentric athlete caught in a scandal that he kept denying, but it’s more fascinating as an examination of how carefully one needs to choose their allies, especially when they’re committing crimes. Enter Porter Fischer, a client of Biogenesis who just wanted to be a part of something that had already greatly impacted his life. The fact that he basically chose to be the head of marketing and promotions on an illegal operation should tell you all you need to know about how naïve Fischer was. And then Bosch made the classic criminal mistake of taking someone who knew where the bodies were buried for granted. Fischer blew the whistle, the story broke, and Major League Baseball handled the whole thing horribly.

All of this is compelling historical material for baseball fans and those who don’t know the Infield Fly Rule alike, but it doesn’t necessarily guarantee good filmmaking (see this week’s other Florida doc in “The Legend of Cocaine Island” for another non-fiction flick about a crazy story that’s simply not as well-told). Yet Corben balances tone here well, allowing the interviews to move along at a nice pace without ever feeling hurried. He even casts child actors in the recreations instead of just finding people who look like Bosch and A-Rod. (Be patient with that trick. It annoyed me at first, but you’ll soon realize this story is too ridiculous for adults.)

As the teams prepare for Opening Day, there’s more and more discussion about the future of baseball. Increasingly a regional sport and facing declining fan interest, the really scary thing to consider is that baseball could use a crazy, out-there personality like Alex Rodriguez to get people talking about it again. Maybe that’s why we’re so forgiving of him—we know the man with the centaur painting is the kind of larger-than-life character that we love to hate and baseball could use one of those right now. Although if “Screwball” teaches us anything, it’s that we probably have no idea what’s really going in locker rooms and Florida strip malls. 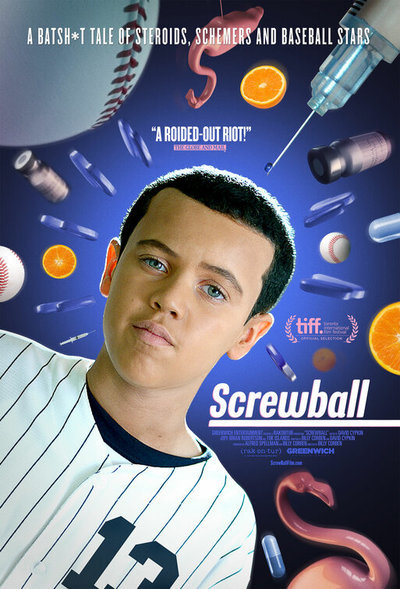 Anthony Bosch as Himself

Porter Fischer as Himself

Tim Elfrink as Himself