"Santa Sangre" is a throwback to the golden age, to the days when filmmakers had bold individual visions and were not timidly trying to duplicate the latest mass-market formulas. This is a movie like none I have seen before, a wild kaleidoscope of images and outrages, a collision between Freud and Fellini. It contains blood and glory, saints and circuses, and unspeakable secrets of the night. And it is all wrapped up in a flamboyant parade of bold, odd, striking imagery, with Alejandro Jodorowsky as the ringmaster.

Those who were going to the movies in the early 1970s may remember the name. Jodorowsky is the perennial artist-in-exile who made "El Topo," that gory cult classic that has since disappeared from view, trapped in a legal battle. Then he made "The Holy Mountain," another phantasmagoric collection of strange visions. And in recent years he has written a series of fantasy comic books, which are best sellers in France and Mexico. Now he is back with a film that grabs you with its opening frames and shakes you for two hours with the outrageous excesses of his imagination.

The film takes place in Mexico, where the hero, Fenix, travels with his father's circus. His father is a tattooed strong man, and his mother is an aerialist who hangs high above the center ring, suspended from the long locks of her hair. She is also a mystic who leads a cult of women who worship a saint without arms - a woman whose arms were severed from her body during an attack by a man. The blood of this saint is "santa sangre," holy blood, collected in a pool in a church, which the authorities want to bulldoze.

The church is pulled down in the opening moments of the movie, while horrendous events take place under the big top. While the mother is suspended from her hair high in the air, she sees her husband sneak out with the tattooed lady. The aerialist tracks them down to their place of sin, kills her and maims her husband with acid before he cuts off her arms and then kills himself.

Or is that what actually happened? The young son, who witnesses these deeds, is discovered years later in an insane asylum, sitting up in a tree, refusing all forms of human communication. Then he receives a visitor: his mother, come to deliver him from his madness. When he re-enters the outer world, he encounters Alma, the deaf-mute girl who was his childhood friend and who has now grown into a grave, calm young woman. And he embarks on a journey that leads into the most impenetrable thickets of Freudian and Jungian symbology.

Fenix's mother, still without arms, makes him her psychological slave. He must always walk and sit behind her, his arms thrust through the sleeves of her dresses, so that his hands do her bidding. Together they perform in a nightclub act - she sitting at the piano, her son playing. But is this really happening, or is it his delusion?

Jodorowsky hardly pauses to consider such questions, so urgent is his headlong rush to confront us with more spectacle. I will never forget one sequence in the movie, the elephant's burial, where the circus marches in mournful procession behind the grotesquely large coffin of the dead animal. It is tipped over the side into a garbage dump, where the coffin is pounced upon and ripped open by starving scavengers.

Another powerful image comes in a graveyard, where the spirits of female victims rise up out of their graves to confront their tormentor.

And there is the strange, gentle, almost hallucinatory passage where Fenix joins his fellow inmates in a trip into town; Jodorowsky uses Mongoloid children in this sequence, his actors communicating with them with warmth and body contact in a scene that treads delicately between fiction and documentary.

If Jodorowsky has influences - in addition to the psychologists he plunders for complexes - they are Federico Fellini, with his love for grotesque and special people and his circuses and parades, and Luis Bunuel, with his delight in depravity and secret perversion, his conviction that respectability was the disguise of furtive self-indulgence. "Santa Sangre" is a movie in which the inner chambers of the soul are laid bare, in which desires become visible and walk into the room and challenge the yearner to possess them.

When I go to the movies, one of my strongest desires is to be shown something new. I want to go to new places, meet new people, have new experiences. When I see Hollywood formulas mindlessly repeated, a little something dies inside of me: I have lost two hours to boors who insist on telling me stories I have heard before. Jodorowsky is not boring. The privilege of making a film is too precious to him for him to want to make a conventional one. It has been 18 years since his last work, and all of that time the frustration and inspiration must have been building. Now comes this release, in a rush of energy and creative joy. 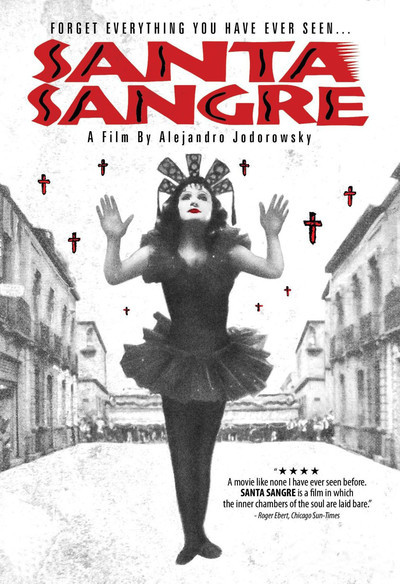