“Salt and Fire” is what happens when a great director makes a very bad film. It’s a beguiling enterprise, to be sure, but instead of being captivated with what is on the screen you’re wondering why this project exists, and if any previous efforts by the filmmaker can help it make sense. For a director who has always reached audiences through what could be considered his own language, like when he injects artifice into his documentaries to create what he calls “the ecstatic truth,” no such interpretation is possible here. “Salt and Fire” is fundamentally bad, in its filmmaking and expressiveness, whether there is any meaning to a parrot quoting Nostradamus or not.

Written and directed by Werner Herzog, “Salt and Fire” is a seed that fails to grow. Inspired by a short story by Tom Bissell, the script is concerned with an ecological disaster in Bolivia, in which three scientists (played by Veronica Ferres, Volker Michalowski and Gael García Bernal) have been sent down by the United Nations to investigate. Ferres is the only scientist that matters, as soon into the movie the scientists are kidnapped, albeit by armed but nonthreatening masked men. Fans of Bernal should be advised that he leaves the picture quickly, due to what is called “the mother of diarrhea,” and that the movie mostly concerns Ferres’ character Laura and conversations with her masked captor, Matt Reilly (Michael Shannon).

After Matt unmasks himself, even though he insisted he wouldn’t, the kidnapping takes a more poetic but ridiculous turn. As a CEO with a personal involvement in the disaster, Laura and her team want to investigate; he kidnaps her to take her to places that she was already going to, and to see things that she was already planning to see. But as he staunchly reasons, “there is no reality, there are only views of reality.” Shannon is undoubtedly a Herzog movie villain, but his hammy passion comes without a stable dramatic reality itself, and it's just hokey. This is when the laugh-out-loud moments arrive, like when his sidekick Krauss (Lawrence Krauss, a theoretical physicist in real life) stands up after appearing in a wheelchair for the whole movie. “Is this a miracle?” Ferres asks, sincerely but with her rough draft performance. Krauss answers: “I only use the wheelchair when I am tired of life.” Even if one wants to take this venture seriously with all that Herzog does and does not put into it, “Salt and Fire” becomes like an extremely dry joke of questionable intent, much more silly or slight than ever profound.

The opening credit of “A Werner Herzog Film” be damned, this is egregious directorial work. Terse expositional dialogue begets hammy, laughable performances, which beget numerous cringeworthy sequences meant to have tinges of poetry or conspiracy. Ferres and Krauss in particular contribute to flat line-reading that the story seems to languish on, while an immaculately expressive actor like Michael Shannon has the vigor snuffed out of him. Cinematographer Peter Zeitlinger goes long with numerous takes, often circling people as they deliver humdinger after humdinger of goofy dialogue, but when scenes end on close-ups of a character’s face, the expressions are unfailingly vacant. As the story and dialogue gets stranger and sillier, looking just like a dressed-up Neil Breen joint, “Salt and Fire” becomes, at its best, Herzog’s version of camp; at its worst, unwitting self-parody.

Eventually, the narrative does get to the place that it dreams about, and you could definitely call it a muse: the salt desert. Herzog’s screenplay is overshadowed by cinematography that captures a truly amazing expanse of white, in the final third of the film in which Laura is abandoned by Matt on an island by the cloud-white sea with two young boys who don’t speak English and are going blind. In the background lay the ominous, massive volcano Uturunku, which we learn will soon enough hurl us into the apocalypse—a better Herzog character than anyone with dialogue here. The way Herzog extensively films this environment will make you miss his documentary filmmaking, which always benefits from the primary sense of discovery, with you alongside him on an adventure to a mysterious corner of the world. But his narratives are often instead about him sharing a time and place that fascinate him so, with “Salt and Fire” becoming an example where the poetry of the landscape implodes to Herzog-babble.

“Salt and Fire” is a movie built on resistance, in manners that must be choices especially from a filmmaker that one should always trust. It resists any narrative integrity, it chooses acting that is lifeless, it rants endlessly whether it wants to amuse logic or not. This would make a lot more sense if Herzog were the type of filmmaker to use high-concept irony, but I don’t fancy Herzog that kind of storyteller (he made a sincere "Bad Lieutenant" reimagining, after all). And even if Herzog has recently allowed himself to become a bit of an intellectual novelty, he is no simple clown. But if anyone could be fulfilled by “Salt and Fire,” I trust that Herzog is. I would love to know why. 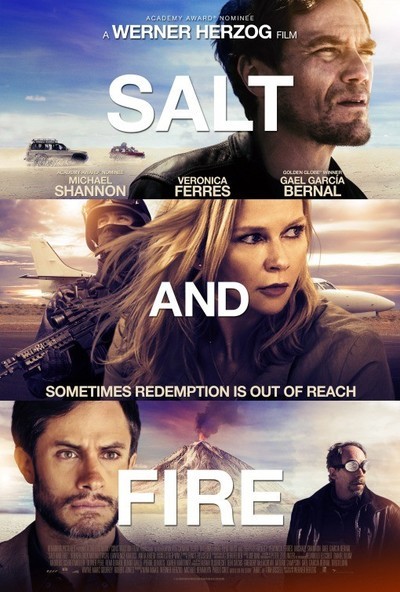 Werner Herzog as Man with one story