Richie Furst (Justin Timberlake), the hero of "Runner Runner," is a smart kid who tries to win his tuition money for Princeton by playing some online poker. When he discovers that the game is fixed, he hightails it down to Costa Rica to confront vaguely legendary gambling tycoon Ivan Block (Ben Affleck), and he allows himself to get drawn into the high life that Block offers. Filled with lush views of tropical beaches, expensive parties and apartments, and sumptuously beautiful but barely characterized women, "Runner Runner" is the kind of meat-and-potatoes genre picture that might be passable if the people involved in making it had given the same thought and concentration to the development of the plot and the ending as they did to the fairly involving set-up.

In its two male leads, "Runner Runner" offers a study in contrasts. Timberlake is still obviously excited to be headlining a movie, any kind of movie, and he takes everything he’s doing here with laudable seriousness and interest. He holds the screen, and he loves being on it. The film builds up to his meeting with Affleck’s Ivan Block, and director Brad Furman gives this key character a visually striking entrance in a steam bath while screenwriters Brian Koppelman and David Levien give Block an entertaining, chewy monologue that many other actors might have made a meal of. But Affleck just sits there in the steam bath and talks without inflecting anything and makes it extremely clear that he doesn’t want to be acting in this movie or acting at all. He seems irritated that he even had to memorize his lines.

Affleck has always been a strange case. He’s been in films for twenty years now, and he’s a star, but has any other star been as frankly indifferent as he often seems on screen? (maybe Frank Sinatra in some of his 1960s vehicles, but at least that indifference was earned). His eyes are hooded and inexpressive, and his voice is inexpressive, and his body seems sedentary even in movement. He has none of the joy or need or skill of an actor, and he never really did. Either he needs to find some energy for this kind of thing, or he should just gracefully step back and direct movies or do something else that interests him more, because his laziness in "Runner Runner" really just won’t do. At the climax of the film, when his character is supposed to look surprised, Affleck merely turns his head slightly and blinks his eyes a couple of times, like an exhausted coquette.

As an exercise in style, "Runner Runner" has its moments, especially early on, but some of Affleck’s torpor seems to infect the film itself after a while. Inventive framing and shot selection give way finally to let’s-get-this-done conversations, filmed in unimaginative shot/reverse-shot style. Recast Ivan Block with any number of actors and "Runner Runner" might have been small-time but diverting fun. With Affleck at its center, the film becomes a tedious study in a poker face with other things on its mind. 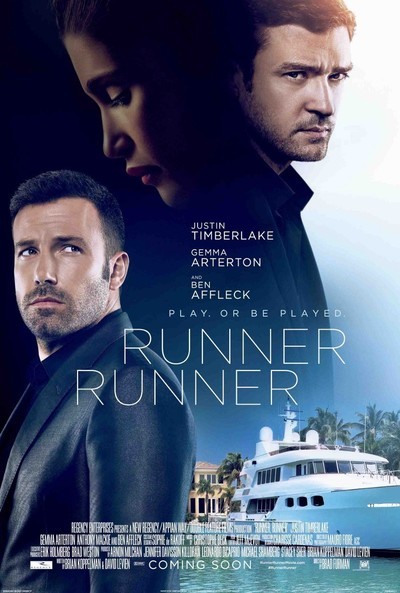