When Shana Feste and her team feel like they’re cutting loose in “Run Sweetheart Run,” the film obtains a campy, thrilling momentum. It’s ultimately one of those pieces that waffles in tone a bit too much—trying to be a few too many movies at once will do that—and almost feels like it missed its window of ultra-relevancy thanks to a 2.5-year pandemic delay (and a few recuts). However, Feste’s overall ambition and craftsmanship, along with a fantastic central performance from Ella Balinska, hold things together even over the film’s rocky patches. It’s a film that needed some work in its final act, one that rushes to a conclusion as it crams in an entirely new movie worth of ideas and even mythology. But there’s no such thing as a perfect date.

Interestingly, “Run Sweetheart Run” had a different set-up when it premiered at Sundance way back in January 2020. At the time, single mother Cherie (Balinska) had chosen to date again, set up by her boss (Clark Gregg) on a blind date. Things have shifted slightly but I think importantly in that Cherie is now forced to go to dinner with Ethan (Pilou Asbæk) because he’s a client and her boss had double-booked with the gentleman and his wife (Betsy Brandt) for their anniversary. It adds another level of manipulation to what happens to her—she was just trying to do her job. And it comes on the heels of an opening scene in which Cherie reports sexual harassment at work, hinting at the idea that what follows is corporate repercussion for speaking out.

“Run Sweetheart Run” would be fun to show to someone with absolutely no awareness of its genre because it almost plays like a rom-com at first. Cherie and Ethan flirt, go to a fancy dinner, and have what feels like pretty strong chemistry even as they decide to go from a nice dinner to roller skating—one of several bizarre cuts in the film that play more like surreal camp than realism. He convinces her to come into his place for one more drink, and then, in my favorite shot of the film, Asbæk actually keeps the camera from following them through the front door, putting his hand up as a stop sign. It’s one of those little self-aware touches that makes Feste’s approach more interesting than it would have been in more generic hands. And it has thematic depth that could be unpacked if one thinks about how often Hollywood shows the romance but not the reality.

And then Cherie bursts from that door, a gaping wound on her head. What follows is a chase through the Los Angeles night, and Feste’s film really embraces its setting, using the harsh, commercialized lighting of the City of Angels along with a pulsing score that sometimes sounds like it’s trying to replicate something like Tangerine Dream (courtesy of a French musician named only Rob). Cherie looks for help everywhere—the cops, her boss, her ex, etc.—but it all ends disastrously as Feste’s film gets more and more surreal. By the time that “Run Sweetheart Run” explains why Ethan seems to always be able to find Cherie, the movie has gone off the rails of realism and Balinska’s really solid performance gets lost in the chaos.

“Run Sweetheart Run” also has a habit of spelling out its metaphors with bold ink. When it’s literally splashing the word “RUN!” across the screen, the bluntness of the moment can be fun, but the movie starts to get weighed down by its own ideas and I wish Feste didn’t sacrifice potential for actual tension as often she does. The truth is that it’s hard to run when you’re carrying so much thematic baggage. 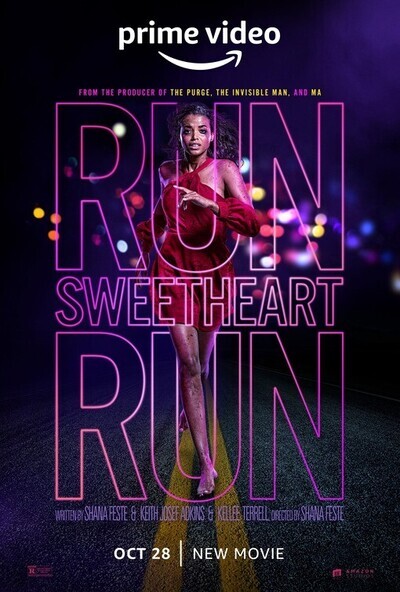