While watching “Roseanne for President!,” I kept wishing that somehow a brassy and sassy human bulldozer like sitcom queen Roseanne Barr—who made a legit run for the Oval Office in 2012—could face off with blowhard Donald Trump in a debate. I certainly would pay good money to witness her mighty mouth shred the GOP’s Great Orange Hope as if he were the final verse of “The Star-Spangled Banner.”

However, I wouldn’t necessarily suggest buying a movie ticket to see this ragtag though fairly amusing documentary about the entertainer’s attempt to become the Green Party’s presidential nominee against Jill Stein, a physician by trade whose passive-aggressive demure nature while dealing with her opponent is as un-Trump-ish as you can get.

VOD seems to be a more appropriate fit, since the Hawaii-based Barr herself preferred to attend most of her whistle stops from the comfort of her home via Skype. “I’m not going to fly there like some candidates,” she explains. “That’s not the Green way,” citing the waste of fossil fuel. But then Barr, in her own inimitably candid fashion, suggests the real reason: “I hate to be around people and touch them or any of that. Plus, the fear that there is going to be weirdos that want to kill me.”

The stand-up comic who popularized the term “domestic goddess” had a way of undermining her own clout as a TV pioneer whose hit series “Roseanne,” which ran nine seasons 1988-97, provided one of the rare sitcom portrayals of a two-income working-class family struggling to make ends meet while also making inroads for gay characters.  Being notoriously undiplomatic and aggressively outspoken formed the foundation of her comedy—she probably was the first humorist to crack a joke about a Maxi Pad—but that persona didn’t always translate when she was not performing. Similarly, this underdog is at her best here when she is onstage, shouting “Power to the people!” and emphasizing that “I’m not running as a publicity stunt since my political views pretty much ended my career anyway.” Indeed, in the course of her campaign, a pilot for a new TV show is rejected.

In the biographical portions of the doc, Barr revels in her hard-knock life and outsider status, including the fact she grew up as a Jew among the Mormon majority of Salt Lake City, Utah, and spent eight months in a state-run mental institution after suffering brain injuries in a car crash at age 16. But offering excuses for not making an effort to connect to people in person—she would rather tap someone’s shoulder than ever shake their hand—is no way to win votes.

But Barr, who has the on-camera support of such name backers as Michael Moore, Rosie O’Donnell and Tom Smothers, was summoned to join the race by the Green Party’s Cynthia McKinney, a black woman who was a Democratic representative from Georgia for six terms before embarking on her own third-party run for president in 2008. McKinney, who realizes it isn’t always easy being Green, is well aware of the powerful effect that celebrity has in a public arena and realizes the potential value of Barr’s presence.

Still, the funny lady is better at zinging quips than defining her Socialist agenda. The legalization of marijuana looms large—Barr is seen inhaling joints filled with her prescription-brand weed, even while driving her car as a police vehicle passes by—and relishes the chance to upset the status quo of the two-party system. She pays lip-service to a single-payer universal health-care system and berates Wall Street bankers regularly, going so far as to say they deserve to face the guillotine.

Ultimately, Barr ends up as the Peace and Freedom Party’s candidate, after losing to Stein, and actually collects a small yet not inconsiderable amount of votes. Spoiler alert: She didn’t win. But what can you expect when she starts off the doc by saying, “What matters isn’t that I win or lose. It’s that I have the freedom to be on the ballot”?

Obviously, this isn’t exactly a totally serious investigation of what it feels to be a non-traditional candidate, not surprising when you realize that Barr is the film’s executive producer and that one of Moore’s cohorts, Eric Weinrib, is the director.

What is unexpected is that Barr allows herself to be upstaged by her humble and dedicated campaign manager Farheen Hakeem. From when we first meet the Minnesota-based, burqua-wearing trouper sporting a sweatshirt that bears the saying, “Don’t hate me because I'm Muslim (and beautiful),” Hakeem is adorable enough in her fumbling attempts to pour campaign buttons into a fish bowl and her initial starstruck reaction to Barr to qualify as a Disney cartoon sidekick. Whether almost getting in an accident during a phone interview while driving in a snowstorm, ineptly hammering together a campaign sign to drag behind her while riding a bike in a parade or silently eating numerous meals out of a Styrofoam container, she puts the root in grassroots politics. 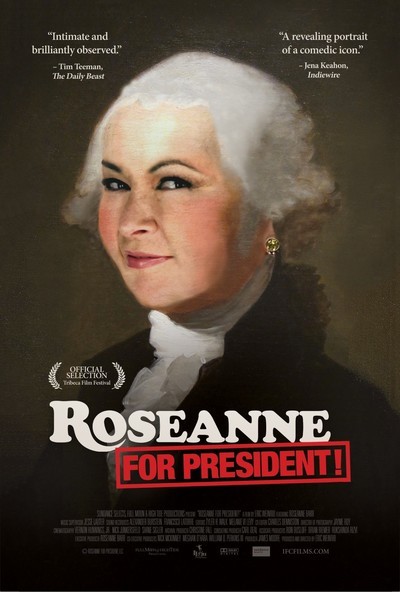 Roseanne Barr as Herself