On January 1, 2014, Colorado became the first American state to legalize marijuana, bringing intense international media attention down on their heads. "Rolling Papers," a new documentary directed by Mitch Dickman, tells the story of that first year of legalization, through the eyes of the team of reporters put together by the Denver Post to cover all things weed. The fact that the paper had hired music writer Ricardo Baca as the first ever "Pot Editor" got media-chatter from all sides, with Stephen Colbert wisecracking, "Pot editor is just a gateway job to Meth editor." "Rolling Papers," then, is not so much a documentary about the legalization of marijuana as it is a story about what it's like to be a journalist in a time when newspapers are folding left and right. It's not the most interesting perspective on the marijuana story, and the Weed team at the Post never really lift off the screen in a way that engages us in meaningful ways. In "Rolling Papers," pot use is seen as unambiguously positive with potential negatives brushed off, made fun of. Dickman's film reeks of pot smoke and non-seriousness.

The documentary's overall theme is that the legalization of marijuana represented unchartered waters for a newspaper. Greg Moore, editor of the Post, states that prioritizing marijuana coverage was a "survival tactic" for the newspaper as much as it was anything else. "Rolling Papers" starts with the Post assembling its marijuana team: Baca as editor, John Ingold as reporter, Erik Gorski as investigative reporter, and two wild-child pot critics (Jake Browne, once a budtender, and Brittany Driver, a mom hired to write a parent-who-smokes-pot column that was, unsurprisingly, quite controversial). The team's content lived on a site called The Cannabist. Whoopi Goldberg wrote columns for The Cannabist (her first entitled "My Vape Pen and I"), although she tried to distance herself from that association a little bit later. "Rolling Papers" shows the team hunting down stories, interviewing the "independent" sellers, visiting marijuana labs, attending the huge Cannabis Cup (the "Olympics" of marijuana growers). Baca even travels to Uruguay where marijuana has been legalized by governmental fiat, to compare and contrast Uruguay's model with the Colorado model.

Unforeseen issues and conflicts arose on the heels of legalization. These are the stories that interest The Cannabist. A big one was that CPS was not on board with the fact that buying pot had become the legal equivalent of buying a six-pack of beer. Cannabist writer Brittany Driver, shown smoking pot with her husband and sitting on the couch watching her 2-year-old run around, says she lived in fear of CPS knocking on her door. There were other issues having to do with the lack of regulation and improper labeling. People were buying weed or "edibles" that had too much THC in them, or not enough. There were some horror stories, a kid leaping to his death from a balcony. Over the course of 2014, Colorado implemented mandatory testing.

The problem with "Rolling Papers" is that it can't decide what it wants to be. It doesn't seem to even realize that it needs to make some choices about its attitude—there's a lackadaisical quality to the footage, with tons of extraneous stuff left in. For example (and this is just one of many): Baca goes to interview a marijuana seller who had been bombarded with complaints about the product (she had gotten it from a manufacturer called Dr. J's Hash Infusion.) Instead of cutting right to the interview, we see Baca standing outside the shop, making chit-chat with a nearby woman (not even the person he is going to interview). They talk for a bit about nothing that has to do with anything before he finally opens the shop door. It's too prosaic and boring to qualify as showing Baca out "on the beat." The issue of Dr. J's Hash Infusion—an organization accused of lying about THC levels on its labels—seems like it might lead to something interesting. What is it like when a longtime criminalized business like pot-dealing has to turn itself into a regular upstanding business along the lines of selling soda or aspirin? But Dickman skips over it, interviewing a representative from Dr. J's in a perfunctory manner, where the guy comes off as sketchy and defensive. It's a missed opportunity for depth and complexity.

Dickman's directorial choices make "Rolling Papers" nearly unbearable. The music is so omnipresent it is more like a battering ram than a soundtrack. Every tiny scene has a song attached to it, one that comments directly on the action onscreen. Baca gets on the plane to Uruguay and suddenly there's Merle Haggard crooning "Silver Wings" for about 20 seconds, before the scene changes, and then another song comes on. It's music along the lines of channel-surfing. Another Dickman choice, the only highly stylized choice in the film, is to present different pot brands as chapter markers, showing a plant rotating on a tiny fur bed, dry-ice billowing through the air, the title of the brand (Super Lemon Haze, Pineapple Express, etc.) blasted in gigantic fonts. Each different brand has its own song, of course. The device wears out its welcome almost immediately, and is 100% tone-deaf when inserted into the middle of a story about a mom who took her dying son off chemo and put him on hemp oil and THC doses.

Any reservations about the legalization of marijuana is treated with a juvenile eye-roll, either figuratively, or in one case, literally, when one member of the team attends a forum, and listens to a mom talk about her concerns with legalization. The director reflects that eye-roll in a particularly low moment, where that woman's comments over the course of the forum are edited down so that all she says, over and over, is the word "kids." "Rolling Papers" isn't serious about investigating both sides, or providing a platform for the other "side" to state their case. It is amusing to watch the "pot critics" follow in the footsteps of wine critics, getting high and then attempting to write down how it feels and tastes. Jake Browne has no journalistic experience and so when Baca gives him an assignment, Baca has to remind Jake of the most rudimentary rules of reporting. As Jake goes off, he murmurs to himself, "I need to google investigative journalism." Now that's funny, but not much else is.

"Rolling Papers" is clearly on the "side" of legalization, and that's not necessarily a bad thing. But the goofing-off vibe, from the bossy songs to the rotating Prince-music-video marijuana leaves—as well as the meandering footage of people just sitting around not doing all that much—doesn't state the case particularly well. 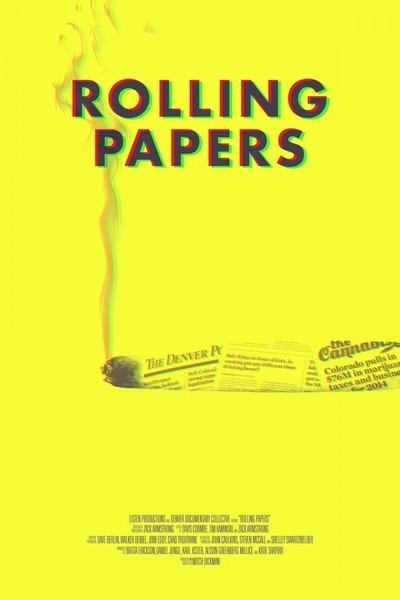