"Rodney King" is a film of provocations, starting with its opening lines, delivered by writer and star Roger Guenveur Smith: "Fuck Rodney King in his ass." Those aren't Smith's words. He's quoting rapper Willie D's song from his album "Goin' Out Like Soldier," an expression of radical opposition to state violence that sanctions violence itself. Smith continues to quote D's rap, which excoriates King for forgiving the police officers who beat him in 1991, sparking a trial that ended in an exoneration that led to the Los Angeles riots a little over a year later.

"On TV crying for a cop," Smith quotes,
"The same mothafuckas who beat the hell outcha
"Now I wish they would've shotcha
"Cause this shit is deeper than Vietnam
And there ain't room for the Uncle Tom."

What follows is a multiplicity of voices, alternately taking King's side and excoriating him, adopting simple points-of-view and then complicating them. "Wow, brother man, no wonder you never go out of the house without your bulletproof vest," Smith says, slipping into his main role as the narrator of this play and addressing King. "Because not only do the white supremacists want to assassinate you, there's at least one Afrocentric homophobic rapper who wants a piece of you, too."

Smith takes us through King's adult life, including his two-year prison stint (in a cell block with Ike Turner, strangely) and his post-beating experience as a celebrity who never wanted to be famous, at least not for that. Most of the time Smith is the omniscient narrator, but occasionally he'll slip into King's psyche, or into the head of another character, such as a hypothetical black conservative who goes on the Internet to warn against canonizing King when figures like Clarence Thomas and Condoleezza Rice are available.

This brief film, practically a featurette, is directed by Spike Lee. Lee has worked with Smith on multiple films, including "Do the Right Thing" and "A Huey P. Newton Story," likewise based on one of Smith's one-man shows. Like most of Lee's work over the years adapting stage dramas or capturing live musical or comedy performances ("The Original Kings of Comedy" is the most famous), "Rodney King" is unobtrusively directed, in contrast to Lee's self-generated dramatic features, which use the camera in an active, expressionistic, at times flamboyant way. This is Smith's show, and it's all about the writing here, with Smith serving more as a town crier, an information delivery device in human form.

Lee often shoots Smith in a tight close-up, his close-cropped, nearly bald head lit from straight on and framed by blackness. Aside from a few flourishes—red and blue police lights washing over Smith as he narrates King being pulled over; exaggerated "Boom!" sounds and quick cuts as the officer's batons strike his flesh; disorienting repeated closeups of a BET announcer at a comedy show identifying King in the audience and commanding, "Stand up, Rodney!"—this is a subdued piece of direction, but never a dull one, because of the coiled intensity of Smith's performance and the strength of the writing.

The language is sing-song, with direct and indirect rhymes, and it's often hard to tell where one sentence begins and another ends. The entire thing cascades out so that you may feel as if you're watching a dramatic movie (or a documentary secretly captured with invisible cameras) unreeling in your mind.

It would be a mistake to write this film off as a piece of filmed theater, though. What Smith and Lee have done here is more of a hybrid, mixing aspects of the cinematic, the theatrical, the literary, and perhaps elements from radio drama as well. Were it not for a few noticeably imprecise, even sloppy camera moves and compositions, as well as an occasional muddiness to the lighting, this would be a technically perfect and aesthetically fully realized production. It's worth seeing because of its engrossing story, which is filled with odd details you probably haven't heard before (such as the two white mice that Ike Turner kept in his cell), and for the skill with which the story has been told, with little more than a stage, some lights, some cameras, a microphone, and an exceptional performer and writer. 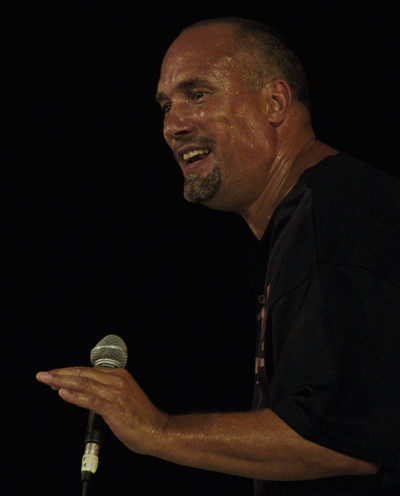