The very best documentaries manage to succeed profoundly as both art and education, but most really “pick a side,” so to speak. Some are far more engaged in the art and story of it all, even if that means playing looser with the facts. Other documentaries clearly see themselves as an educational tool, first and foremost. “Rise Again: Tulsa and the Red Summer,” the new documentary from filmmaker Dawn Porter (“John Lewis: Good Trouble,” “The Way I See It”), is staunchly in the latter category. For those who might not be familiar with the Red Summer or the Tulsa massacre—or for those who only know about the latter from the 2019 HBO “Watchmen” limited series—this documentary is a worthwhile introduction to a horrific but fundamentally important part of American history conveniently ignored by the standard K-12 curriculum. Unfortunately, for those who are more familiar with the history of being Black in America, particularly in the early 20th century, there really isn’t enough here.

Washington Post journalist DeNeen Brown, widely noted for her reporting on the Tulsa massacre and its legacy, including ongoing excavation efforts to identify mass grave sites, serves as the film's principal subject and de-facto narrator. The camera follows her as she speaks with community activists and massacre descendants both in Tulsa and Elaine, Arkansas, where what was likely the deadliest massacre of the Red Summer—a period of widespread white supremacist terrorism that occurred in the summer and fall of 1919—took place. Considering the historical events occurred when cameras were still relatively new, and therefore archival images and footage is rather limited, the amount of B-roll from the present day feels like a move made both out of necessity and as a creative choice to emphasize the focus on exploring how the legacy of this history continues into the present.

In Tulsa, Brown watches archeologists in the distance at work in the Oaklawn Cemetery, where a mass grave is eventually discovered in late 2020. In Elaine, Brown speaks with James White, the director of the Elaine Legacy center, and Lenora Marshall, the VP of its board, overlooking a rather forlorn empty field. They tell her that somewhere out there is a mass grave from the Elaine massacre; it is thought that hundreds of Black lives were lost in just one late September night in 1919 at the hands of white supremacist rioters, although massive efforts to cover up what happened, and then deny the massacre even took place, mean the true numbers will never be known. It’s more implied than directly stated that Elaine lacks the media attention or resources to mount excavation efforts similar to Tulsa. They did try planting a commemorative tree, though. Someone came and chopped it down.

The way the documentary handles the moment leaves no room for feeling angry. In general, perhaps in seeking to encourage engagement, to handhold and not alienate or make uncomfortable, “Rise Again” allows minimal room for anger, even when very earned. I often wish it would have. In avoiding that emotion, though, the rare mentions of such realities really stand out. At one point, J. Kavin Ross, a photojournalist and descendant of a Tulsa massacre survivor, recounts how his great-grandfather was unable to rebuild after his home was destroyed—or sell his remaining land to save his business—and lost everything after building a comfortable life for his family. “He left the state of Oklahoma, never to return, and died angry,” Ross states simply. It’s one of the most effecting lines in the entire documentary, due in part to how the documentary seems to consider it more of a throwaway and therefore doesn’t make Ross compete with a swell of ham-fisted dramatic stock music (this, unfortunately, does prove an issue elsewhere.)

The focus of "Rise Again" is a little scattershot—even the title itself hints at this, considering that while the Red Summer and the Tulsa massacre are both part of larger trend and share several commonalities, the Red Summer really refers to a specific period in 1919 while the Tulsa massacre occurred in 1921. The film speeds through or entirely glosses over a lot of specifics in order to cover as wide a swath as possible, but the consequence of this choice is that dots aren’t always connected quite as strongly as they could be.

For instance, it takes the time to discuss the significance of how D. W. Griffith’s 1915 ode to the KKK, “The Birth of a Nation,” was screened at the White House to rapturous praise from Woodrow Wilson, but then doesn’t really make nearly as strong of an argument it could. Bringing up the film at all is really something of a detour; its function is primarily illustrative, to introduce the narrative it codified about Black men being a threat from which white women, in particular, needed protecting. Such a malicious and malignant narrative is at the root of much white supremacist violence including the Tulsa massacre, in which the entire Greenwood District, the well-off Black area in Tulsa, was razed to the ground, and possibly upwards of 100 Black people were killed, after a local Black man was accused of sexually assaulting a white woman. But the documentary doesn’t make nearly as strong a case for making a detour to talk about “The Birth of a Nation” as it could have.

It could have mentioned how the “The Birth of a Nation” wasn’t merely screened at the White House but will forever be the first movie ever screened there. It could have gone into the role that the film itself had in revitalizing the KKK, or the incidents of racial violence that screenings of that film inspired. But it doesn’t. It also weirdly doesn’t bring up Ida B. Wells, the incredible Black investigative journalist who noticed the pattern of Black men and entire Black communities being annihilated in retaliation after accusations from white women decades before Griffith’s movie was even made, until much later in the documentary. Mostly, the documentary’s structure comes across as meandering and roundabout, occasionally becoming downright jumbled.

The last section of “Rise Again” is the most frustrating, as Porter focuses more pointedly on the present and where we go from here, while also playing notably coy when it comes to the idea of taking action. Soundbites are selected such that calls for “justice” and “reparations” and “holding people accountable” become vague platitudes. Such terms mean different things to different people, the documentary communicates, and then the film fails to define what these teams mean to most of the key interview subjects featured. A notable exception is Tulsa mayor G. T. Bynum, who makes clear that he doesn’t support the idea of reparations taking the form of actual financial compensation to the descendants of survivors. He says he doesn’t think it fair to present day Tulsans to be held financial responsible for that crime of the past—though, of course, Black Americans continue to suffer the consequences of centuries of being unable to accrue assets or intergenerational wealth every day. But this is not the sort of documentary that’s going to stop to explore the outrageous hypocrisy of such a statement; it just moves on. Meanwhile, none of the Black interviewees are asked to speak to what their idea of appropriate reparations would be—or at least, beyond step one being the need for widespread public acknowledgement of these historical atrocities and their ongoing impacts. But what happens after witnessing? What happens after acknowledging? When do we finally get to start talking about that?

Timed to commemorate Juneteenth and the centennial of the Tulsa massacre, the release of “Rise Again” at this current moment also feels remarkably prescient considering that critical race theory—i.e., understanding racism as systemic—has become a key talking point in mainstream news media over the past several weeks.

Watching the ending of “Rise Again,” which tries its very hardest to land on a solidly hopeful note with rose-tinted glasses fixed on the horizon without belittling the subject matter, is somewhat eerie in the context of the current news cycle. In many ways “Rise Again” feels like something that would be perfect to show to a middle-school classroom—an even-keeled introduction to a crucial facet of American history and how it lives on painfully in the present—and yet whether this film would even be allowed to be utilized is currently a contentious subject of public debate. While I would love to believe Porter’s hopeful outlook, the skies look more overcast from where I’m standing. Still, though its forecasting might be overly optimistic, I’m glad "Rise Again" exists. I just hope that the audiences who could really learn something from it take the time to watch it. 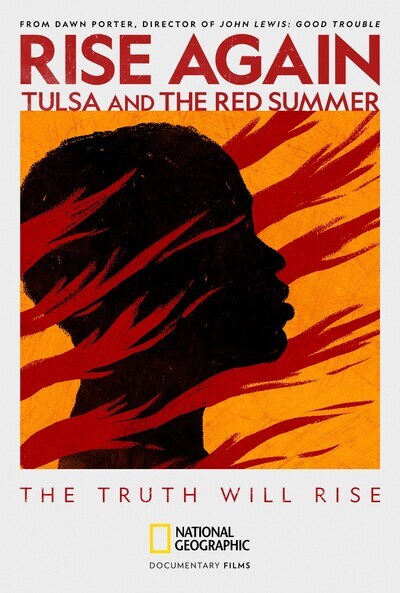 DeNeen L. Brown as herself