The documentary “John Lewis: Good Trouble” is a celebration of the ageless octogenarian, tracing his activism from key moments in the civil rights movement of the 1960s through his efforts today to preserve and protect Americans’ ability to vote, which is increasingly in peril nationwide. Director Dawn Porter’s film is an intimate homage to both the legend and the man, as spry and lively as Lewis himself. It is rather straightforward structurally, though, with its combination of rich archival photos and footage, interviews with fellow political luminaries, and verité segments of Lewis going good-naturedly about his crowded days.

Through it all, the longtime Democratic Georgia congressman reveals himself as a dignified titan, as engaging in a one-on-one conversation outside church as he is addressing a raucous campaign rally crowd. A warts-and-all depiction, this is not. Porter does not press Lewis on any issues or ask him any uncomfortable questions. But she does offer him some moments of introspection. In one of her more intriguing storytelling tactics, she has Lewis sit on a sparse soundstage and review images from his own history—some of which he’d never seen before—including non-violent protest training he imparted to fellow African-Americans as they fought to integrate the South, suffering vicious beatings in the process. She also has him look directly into the camera and speak in a way that’s reminiscent of Errol Morris’ interviewing style, and Lewis’ combination of warmth and wisdom makes these statements particularly disarming.

“I feel lucky and blessed that I’m serving in the Congress,” he says at the film’s start. “But there are forces today that are trying to take us back to another time and another dark period.” This is not his first battle, and it’s clear that he’s drawn on decades of fortitude to continue standing up for what he believes in during the Trump administration. As the late Rep. Elijah Cummings puts it, Lewis is such an effective leader because he’s been there—he’s lived through tumultuous change walking alongside the Rev. Martin Luther King Jr. from Montgomery to Selma, Alabama, as an original Freedom Rider and as a speaker at the March on Washington. He was in the room at the Ambassador Hotel from Robert F. Kennedy was fatally shot. He went door to door in the early ‘70s, registering Southern Blacks to vote.

But he has endured, and he’s continued encouraging others to get into good trouble—the catch phrase that gives Porter’s film its title—necessary trouble, he says, to get things done. Besides Cummings (who amusingly recalls getting mistaken for Lewis on a regular basis), Hillary Clinton, House Speaker Nancy Pelosi, Rep. Alexandria Ocasio-Cortez and Sen. Cory Booker are among the major political players who speak in reverent tones of the historical impact Lewis has had and the tenacity he continues to display. But the film’s smaller moments leave even more of an impression, such as a parking lot conversation he has with a woman his age in which the two compare their experiences picking cotton as children. Lewis talks of having been the son of sharecroppers in rural Troy, Alabama, and the kind but firm demeanor that served him well in tending to chickens as a child seems never to have left him. (His siblings can attest to this, sharing loving stories of Lewis preaching to the chickens when he was young.)

That mixture of idealism and determination remains just as potent within him today, which makes “John Lewis: Good Trouble” especially worthwhile now, at a time when the nation and the world seem to be falling apart. It also makes him more relevant than ever, and even a bit of a rock star. In one humorous sequence, he can’t get through the airport without being stopped countless times to shake hands or take pictures with adoring fans. And as Black Lives Matter protestors take to the streets from coast to coast demanding justice and an end to police brutality, it’s instructive and inspiring to have someone like Lewis who has bravely paved the way for them.

Now available in virtual cinemas and On Demand. 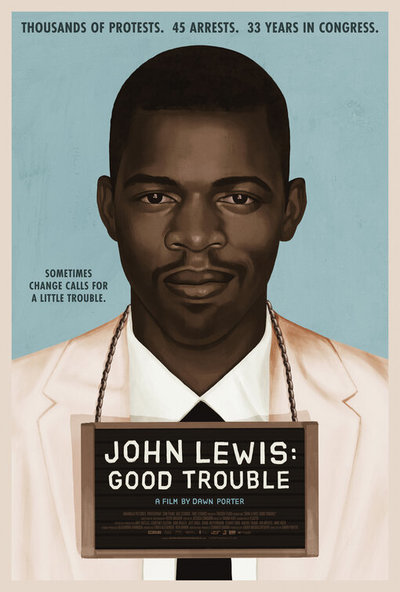 John Lewis as Himself